R u tryin to b formal? Nowadays, it’s hard for us to imagine a life without mobile phones. 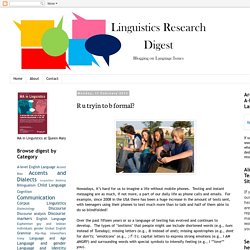 Texting and instant messaging are as much, if not more, a part of our daily life as phone calls and emails. For example, since 2008 in the USA there has been a huge increase in the amount of texts sent, with teenagers using their phones to text much more than to talk and half of them able to do so blindfolded! Over the past fifteen years or so a language of texting has evolved and continues to develop. The types of ‘textisms’ that people might use include shortened words (e.g., tues instead of Tuesday); missing letters (e.g., & instead of and); missing apostrophes (e.g., dont for don’t); ‘emoticons’ (e.g., ;-)); capital letters to express strong emotions (e.g., I AM ANGRY) and surrounding words with special symbols to intensify feeling (e.g., I **love** you).

They found that the female participants sent more texts and used more textisms than the males. The pun conundrum. 16 January 2013Last updated at 04:26 ET To pun or not to pun, that is the question. 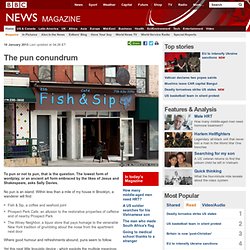