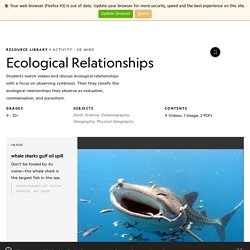 Introduce vocabulary terms related to ecological interactions and symbiosis. Explain that in this activity students will use a series of videos, images, and scenarios to identify and discuss examples of ecological and symbiotic relationships in the ocean. Write the following terms on the board: competition, predation, symbiosis, mutualism, commensalism, and parasitism. Do not include the definitions yet. First, ask students to identify the root words and brainstorm what types of ecological and symbiotic relationships the terms describe. 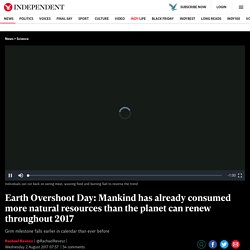 Earth Overshoot Day is on 2 August this year, according to environmental groups WWF and the Global Footprint Network. The date, earlier this year than in 2016, means humanity will survive on “credit” until 31 December. We’ll tell you what’s true. You can form your own view. From 15p €0.18 $0.18 USD 0.27 a day, more exclusives, analysis and extras. “By August 2 2017, we will have used more from Nature than our planet can renew in the whole year,” the groups said in a statement.

“This means that in seven months, we emitted more carbon than the oceans and forests can absorb in a year, we caught more fish, felled more trees, harvested more, and consumed more water than the Earth was able to produce in the same period.” The Earth Overshoot Day measure has been calculated since 1986 and the day has never fallen so early as in 2017. (84) Ecosystems for Kids.

YouTube. (84) Is it Livin’? - Music Video - Science With Tom #1. (84) They Grow - Science Rap Academy. (84) Artificial Photosynthesis. The simple story of photosynthesis and food - Amanda Ooten. Chlorophyll (also chlorophyl) is a green pigment found in cyanobacteria and the chloroplasts of algae and plants. 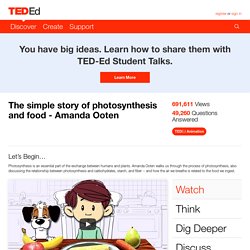 Its name is derived from the Greek words chloros ("green") and phyllon ("leaf"). Chlorophyll is an extremely important biomolecule, critical in photosynthesis, which allows plants to absorb energy from light.Chloroplasts are specialized organelles found in all higher plant cells. These organelles contain the plant cell's chlorophyll responsible for the plant's green color and the ability to absorb energy from sunlight. This energy is used to convert water plus atmospheric carbon dioxide into metabolizable sugars by the biochemical process of photosynthesis. Chloroplasts have a double outer membrane.Stomata are minute aperture structures on plants found typically on the outer leaf skin layer, also known as the epidermis. (84) Chemistry Tutorial: Chemical Equations & Photosynthesis. (84) Four Spheres Part 2 (Hydro and Atmo): Crash Course Kids #6.2.