Department of the Army Emblem. Corinth. Located on the isthmus which connects mainland Greece with the Peloponnese, surrounded by fertile plains and blessed with natural springs, Corinth was an important city in Greek, Hellenistic, and Roman times. 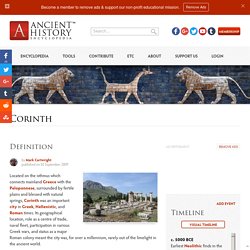 Its geographical location, role as a centre of trade, naval fleet, participation in various Greek wars, and status as a major Roman colony meant the city was, for over a millennium, rarely out of the limelight in the ancient world. Corinth in Mythology Not being a major Mycenaean centre, Corinth lacks the mythological heritage of other Greek city-states. Nevertheless, the mythical founder of the city was believed to have been King Sisyphus, famed for his punishment in Hades where he was made to forever roll a large boulder up a hill. Sisyphus was succeeded by his son Glaucus and his grandson Bellerophon, whose winged-horse Pegasus became a symbol of the city and a feature of Corinthian coins. Historical Overview. Greek Warfare. In the ancient Greek world, warfare was seen as a necessary evil of the human condition. 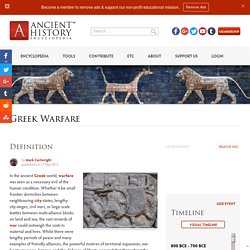 Whether it be small frontier skirmishes between neighbouring city-states, lengthy city-sieges, civil wars, or large-scale battles between multi-alliance blocks on land and sea, the vast rewards of war could outweigh the costs in material and lives. Whilst there were lengthy periods of peace and many examples of friendly alliances, the powerful motives of territorial expansion, war booty, revenge, honour, and the defence of liberty ensured that throughout the Archaic and Classical periods the Greeks were regularly engaged in warfare both at home and abroad.

Hoplite. A hoplite (from ta hopla meaning tool or equipment) was the most common type of heavily armed foot-soldier in ancient Greece from the 7th to 4th centuries BCE, and most ordinary citizens of Greek city-states with sufficient means were expected to equip and make themselves available for the role when necessary. 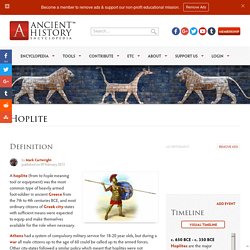 Athens had a system of compulsory military service for 18-20 year olds, but during a war all male citizens up to the age of 60 could be called up to the armed forces. Other city-states followed a similar policy which meant that hoplites were not professional soldiers and often lacked sufficient military training, although some states did maintain a small elite professional unit, the epilektoi. The most famous of these was the Sacred Band of Thebes, a unit composed of 150 pairs of male lovers who swore to defend their partner to the death. The principal weapons of a hoplite infantryman were a long ash wood spear (doru) and a short sword (xiphos). Weapons & Armour Hoplite Phalanx. The Ancient Greek World. Great Questions – StoryCorps. After 12 years of listening, we know what makes a good conversation: Start by asking Great Questions. 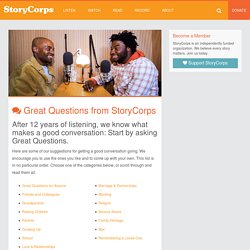 Here are some of our suggestions for getting a good conversation going. We encourage you to use the ones you like and to come up with your own. This list is in no particular order. Choose one of the categories below, or scroll through and read them all. Great Questions for Anyone Who has been the most important person in your life? Friends or Colleagues If you could interview anyone from your life living or dead, but not a celebrity, who would it be and why? Grandparents Where did you grow up? Raising Children When did you first find out that you’d be a parent? Parents Do you remember what was going through your head when you first saw me? Growing Up When and where were you born? School Did you enjoy school? Love & Relationships Do you have a love of your life?

Marriage & Partnerships How did you meet your husband/wife? Working What do you do for a living? Religion. Classical Greek Shield Patterns. Welcome to Luke's Library of: This page last modified: October 17, 2000 This collection is mainly intended to help wargamers painting their Greek armies. 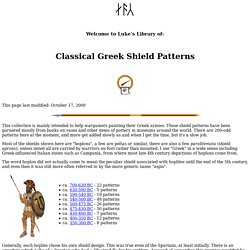 These shield patterns have been garnered mostly from books on vases and other items of pottery in museums around the world. There are 200-odd patterns here at the moment, and more get added slowly as and when I get the time, but it's a slow job. Most of the shields shown here are "hoplons", a few are peltas or similar, there are also a few parablemata (shield aprons); unless noted all are carried by warriors on foot rather than mounted. The word hoplon did not actually come to mean the peculiar shield associated with hoplites until the end of the 5th century, and even then it was still more often referred to by the more generic name "aspis". Generally, each hoplite chose his own shield design. It is widely assumed that Sparta was the first state to introduce uniform shield patterns, but the evidence does not bear this out.