Meet Dr. Gladys West, the hidden figure behind your phone's GPS. Whether you are getting driving directions from your phone or tagging the location of an Instagram photo, the use of GPS (Global Positioning System) has become seamlessly integrated into our daily lives. 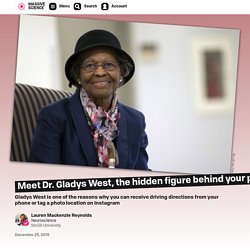 But less ubiquitous is the knowledge that GPS got its start in the mind of an Air Force mathematician named Gladys West. West was born in 1930 in Dinwiddie County Virginia, a rural community where her family had a small farm. Meet Stephanie Kwolek, the woman who gave us bulletproof vests and yoga pants. There’s a pile of fibers that Stephanie Kwolek helped invent. 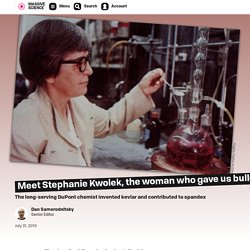 She laid the groundwork for NomexⓇ, the flame-resistant nylon-like material used in firefighters’ suits. She was involved in the development of spandex (LycraⓇ). But her most famous, most impactful science came when she cooked up a thin soup of polymers that could stop bullets in their tracks. Kwolek’s initial ambition was not to be chemist at all. By my count, it was at least her third ambition.

After her father passed away, Kwolek cared for her younger brother while their mother looked for work. Meet Katherine Johnson, the computer who helped send men to the moon. You probably know the name Katherine G. 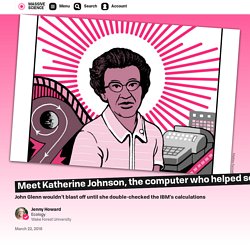 Johnson from the popular book-turned-movie “Hidden Figures.” In the film, Johnson (played by actress Taraji P. Henson) is the protagonist who double-checks the numbers produced by the newly installed IBM computer before the astronaut, John Glenn, launches into space. She was pretty badass in the movie. Meet Mary Golda Ross, one of the first Native Americans in engineering.

A woman in a long evening gown and elegantly coiffed hair walked on to the stage of “What’s My Line?” 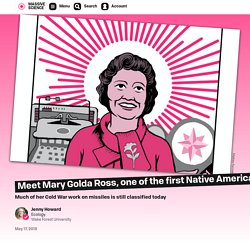 In 1958 and completely stumped panelists attempting to guess her occupation. Five facts about Pamela E. Harris, Mexican-American mathematician and educator of "leaders of character" Pamela Harris works on the theorem of Zeckendorf. 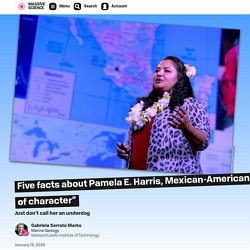 She explained it like this: if you have all the Fibonacci numbers (a special series of numbers, where, starting with 0 and 1, you add two in a row to make the third number) you can take any whole number, like 2020, and write it as a unique sum of non-consecutive Fibonacci numbers (if you start from 1 and 2). To be honest, she lost me there. But there’s a lot more to Harris than her research, which is why she’s a science hero to me: she’s an accomplished educator and a fierce advocate for immigrants.

Meet Alice Wilson, the Canadian geologist who did the work of five people. Alice Wilson was a lot of firsts. 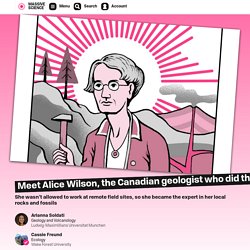 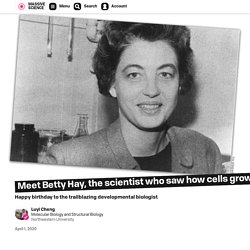 In each of these processes, cells change dramatically. Betty Hay studied fascinating biological phenomena, relentlessly asking questions with her students and colleagues to understand how cells behaved. By the end of her life, she had made enormous research contributions in developmental biology, on top of committing herself to mentoring the next generation of scientists and advocating for more representation of women in science. She made significant contributions towards understanding cell and developmental biology Betty Hay began as an undergraduate at Smith College in 1944. Hay regarded Rose as a significant scientific mentor in her life and followed his advice to apply for medical school instead of graduate school. The year after, she moved her studies to Cornell University’s Medical College as an Assistant Professor to learn how to use the powerful microscopes located there.

Meet Lynnae Quick, NASA's hunter of space cryomagma. What lies beneath the surface of icy moons and distant planets? 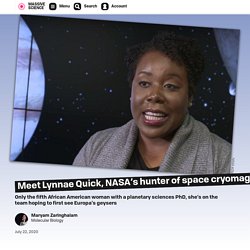 Global oceans of salty water? Cryomagma waiting to burst through the surface in geyser-like jets? Hints of extraterrestrial life? Planetary geophysicist Lynnae Quick has dedicated her career to investigating the inner workings of planets and moons. Today, she is the Ocean Worlds Planetary Scientist at NASA Goddard Space Flight Center. Mentors helped her find her way to icy moons Quick grew up in Greensboro, North Carolina and found her way to the sciences through a high school biology course. Mentors like Brown played an instrumental role throughout Quick’s career. Meet Elisa Izaurralde, who decrypted the mystery of messenger RNA.

Becoming a scientist is hard work. 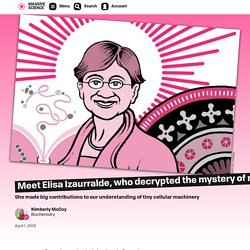 Becoming a renowned scientist is even harder. Elisa Izaurralde managed to do both, becoming a distinguished biochemist and molecular biologist. She made significant contributions to understanding how RNA, DNA’s chemical cousin, shuttles from place to place in the cell, turning on and turning off gene expression. From a young age, Izaurralde had always known that she wanted to study science.