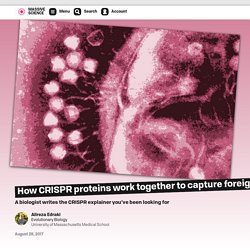 Phages are vicious bacteria killers, sinking their hooked legs into the bacterium and injecting their DNA, hijacking bacterial machinery for its own uses. One phage can multiply in minutes, bursting the zombiefied bacterium open, spewing out phages that can now infect more bacteria: outbreak! Bacteria, on their part, have evolved an adaptive immunity to attempt to combat phages: CRISPR.

The term was in the news a lot recently when the world was obsessed with the GIF of an 1878 galloping horse stored in bacteria and again when presented with the possibility of ‘designer babies.’ But our basic knowledge of how CRISPR actually works is still very limited, and the recent findings, ripe with premature projection, get far ahead of the fascinating, complicated process we are just beginning to understand.

Why I'm quitting GMO research. A few weeks ago, like thousands of other scientists around the globe have done before, I stood up in front of a public audience and “defended” my PhD thesis to a jury of senior scientists. 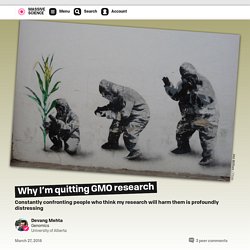 The PhD defense is probably the single-most significant milestone in a career in science. It’s part examination and part ritual – PhD defenses in the Netherlands, for instance, feature a robed jury and a master of ceremonies with a ceremonial mace. In my university in Switzerland, tradition dictates that PhD students get whimsical “hats” made by fellow researchers which are donned just as the results (hopefully a pass) are announced. My hat featured (among several digs at my Twitter fixation) references to CRISPR technology and the several genetically-modified plants I worked on for my PhD. Nevertheless, my time in GMO research creating virus-resistant plants has meant dealing with the overwhelming negative responses the topic evokes in so many people. What ancient corn farmers can teach us about engineering crops for climate change. There are more than 50 strains of maize, called landraces, grown in Mexico. 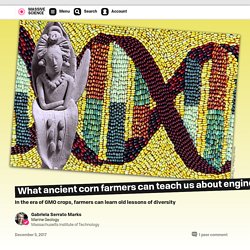 A landrace is similar to a dog breed: Corgis and Huskies are both dogs, but they were bred to have different traits. Maize domestication worked the same way. Some landraces of maize can grow in really dry conditions; others grow best in wetter soils. Early maize farmers selectively bred maize landraces that were well-adapted to the conditions on their land, a practice that still continues today in rural areas of Mexico. If you think this sounds like an early version of genetic engineering, you’d be correct. But as more farmers converge on similar strains of (potentially genetically modified) seeds instead of developing locally adapted landraces, there are two potential risks: one is losing the cultural legacy of traditional agricultural techniques that have been passed on in families for centuries or even millennia, and another is decreasing crop resilience even as climate variability is increasing. The breakthrough behind those 'pure blue' chrysanthemums was pure luck.

In the early 1600s, wealth from seafaring, colonization, and increased trade led to the rise of a strange status symbol in the Netherlands. 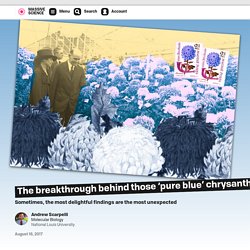 For a brief period of time, tulip bulbs became more valuable than gold. Farmers sought new varieties, and demand for obscure and rare colors became fierce. The most sought-after were colors that were rare in nature, such as black tulips. We haven’t stopped seeking new flower combinations since. In a recent study out of Japan, scientists led by Naonobu Noda at the Institute of Vegetable and Floriculture Science created a “true blue” chrysanthemum.

The researchers started by taking genes from two other plants with blue flowers, Canterbury bells and butterfly peas, and inserting them into the chrysanthemum genome. The results were surprising. Dear Harvard, Berkeley, and MIT: don't patent CRISPR. There is nothing scientists like to talk about more than the purity of their profession. 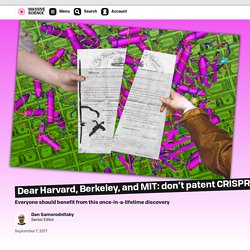 Egalitarian. If Identical Twins Married Identical Twins, How Genetically Similar Would Their Children Be? A couple of identical couples recently doubled up for life. 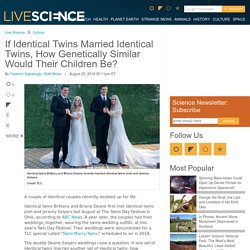 Identical twins Brittany and Briana Deane first met identical twins Josh and Jeremy Salyers last August at The Twins Day Festival in Ohio, according to ABC News. A year later, the couples had their weddings, together, wearing the same wedding outfits, at this year's Twin Day Festival. How much of human height is genetic and how much is due to nutrition? Molecular biologist Chao-Qiang Lai of the Jean Mayer U.S. 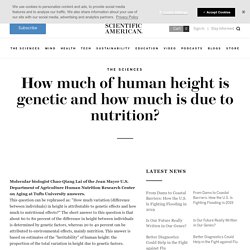 Department of Agriculture Human Nutrition Research Center on Aging at Tufts University answers. This question can be rephrased as: "How much variation (difference between individuals) in height is attributable to genetic effects and how much to nutritional effects? " The short answer to this question is that about 60 to 80 percent of the difference in height between individuals is determined by genetic factors, whereas 20 to 40 percent can be attributed to environmental effects, mainly nutrition.

This answer is based on estimates of the "heritability" of human height: the proportion of the total variation in height due to genetic factors. Human height is a quantitative, or metric, trait, i.e., a characteristic that is measured in quantity, and is controlled by multiple genes and environmental factors. Heritability allows us to examine how genetics directly impact an individual's height. Dr.