Will Artificial Intelligence Save or Doom Humanity? A few weeks ago, for the first time ever, a computer beat the world champion of Go, one of the most complex games known to man. 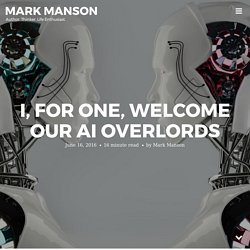 This was another watershed moment in the progress of artificial intelligence. To give you an idea how complex Go is, there are 2.082 × 10^170 possible board configurations. That is 2 with 170 zeroes after it. Chances are your brain cannot even conceive of a number that large (but a computer can). Or to give you an idea of how big of a number that is, there are only 10^80 atoms in the universe — that is, one followed by 80 zeroes. The reason this is such a big deal is that Go is so complicated that in order to beat a top human player, a machine would have to learn how to think creatively, improvising and adapting to the situation at hand without being able to calculate every possible outcome; i.e., there has to be some serious artificial intelligence going on — like real, creative intelligence.

Computers are getting smarter. They think we’re totally fucked. Why? Ruth Chang: How to make hard choices. Michel Foucault’s Controversial Life and Philosophy Explored in a Revealing 1993 Documentary. Michel Foucault’s colorful life and hugely influential work were both struggles against limitation—the limits of language, of social structures and stultifying historical identities. 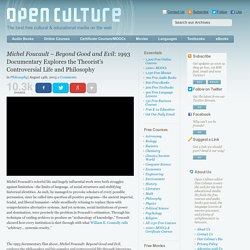 As such, he managed to provoke scholars of every possible persuasion, since he called into question all positive programs—the ancient imperial, feudal, and liberal humanist—while steadfastly refusing to replace them with comprehensive alternative systems. And yet systems, social institutions of power and domination, were precisely the problem in Foucault’s estimation. Through his technique of raiding archives to produce an “archaeology of knowledge,” Foucault showed how every institution is shot through with what William E.

Connolly calls “arbitrary… systemic cruelty.” You can find Michel Foucault: Beyond Good and Evil listed in our collection, 1,150 Free Movies Online: Great Classics, Indies, Noir, Westerns, etc.. via Critical Theory Related Content: Naive Philosophy. Noam Chomsky: The Kind of Anarchism I Believe in, and What's Wrong with Libertarians. Index page. It is currently Thu May 30, 2013 3:54 am <A HREF=" Widgets</A> Philosophy This is the main board for discussing philosophy - formal, informal and in between. 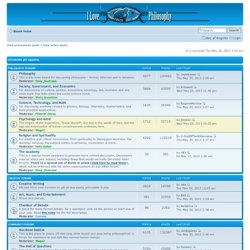 Moderator: Only_Humean 9077 Topics 234482 Posts Last post by rayliikanen Thu May 30, 2013 2:59 am Society, Government, and Economics For discussions of culture, politics, economics, sociology, law, business and any other topic that falls under the social science remit. Moderator: Stoic Guardian 3898 Topics 93595 Posts Last post by Kriswest Wed May 29, 2013 11:46 pm Science, Technology, and Math For discussing anything related to physics, biology, chemistry, mathematics, and their practical applications.

Moderator: Flannel Jesus 1634 Topics 36340 Posts Last post by EugeneMorrow Thu May 30, 2013 2:07 am Psychology and Mind The origins of the imperative, "know thyself", are lost in the sands of time, but the age-old examination of human consciousness continues here. Who is online Statistics. Index page.