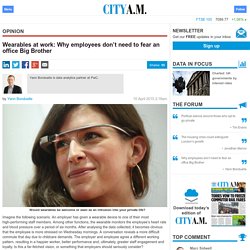 An employer has given a wearable device to one of their most high-performing staff members. Among other functions, the wearable monitors the employee’s heart rate and blood pressure over a period of six months. After analysing the data collected, it becomes obvious that the employee is more stressed on Wednesday mornings. A conversation reveals a more difficult commute that day due to childcare demands. The employer and employee agree a different working pattern, resulting in a happier worker, better performance and, ultimately, greater staff engagement and loyalty. In-Depth: Recent digital health moves by payers, health insurers.

An October report from the Psilos Group suggested that payors now need to figure out how to better serve individuals, not just as end users but as customers. 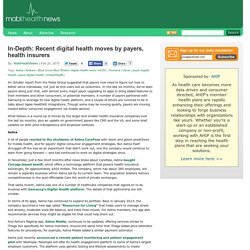 In the last six months, we’ve seen payors doing just that, with almost every major payor upgrading its apps to bring added features to their members and other consumers, or potential members. A number of payors partnered with Samsung to leverage its new digital health platform, and a couple of others are rumored to be in talks about Apple HealthKit integrations.

Though some may be moving quietly, payers are moving toward better consumer engagement via mobile devices. What follows is a round-up of moves by the larger and smaller health insurance companies over the last six months, plus an update on government payers like CMS and the VA, and some brief updates on both price transparency and employee wellness. Capital - Office fitness trackers: Fun perk or creepy leash? Fitness trackers chase after the corporate market. The Fitbit Flex wristband is one of the new devices that tracks how much or how little a person is moving. 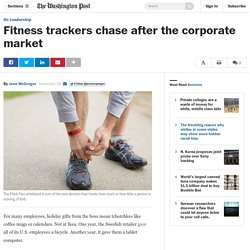 (Fitbit) For many employees, holiday gifts from the boss mean tchotchkes like coffee mugs or calendars. Not at Ikea. One year, the Swedish retailer gave all of its U.S. employees a bicycle. Insurance startup Oscar pays members for using Misfit Flash activity trackers. New York-based health insurer startup Oscar Health is teaming up with Misfit Wearables to get more of its 16,000 members moving. 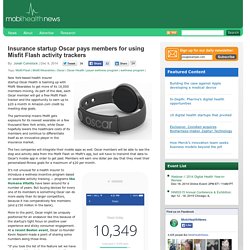 As part of the deal, each Oscar member will get a free Misfit Flash tracker and the opportunity to earn up to $20 a month in Amazon.com credit by meeting step goals. The partnership means Misfit gets exposure for its newest wearable on a few thousand New York wrists, while Oscar hopefully lowers the healthcare costs of its members and continue to differentiate itself as an innovative player in the insurance market. The two companies will integrate their mobile apps as well. Oscar members will be able to see the step and activity data from the Misfit Flash on Misfit’s app, but will have to transmit that data to Oscar’s mobile app in order to get paid. Members will earn one dollar per day that they meet their personalized fitness goals for a maximum of $20 per month. Jawbone tackles employee wellness with Up for Groups.

Jawbone has launched an employee wellness program, called Up for Groups, which is designed for any group with 10 or more participants. 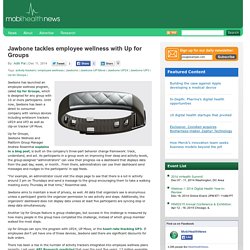 Until now, Jawbone has been a direct to consumer company with various devices including wristworn trackers UP24 and UP3 as well as clip-on tracker UP Move. Up for Groups, Jawbone Wellness and Platform Group Manager Andrew Rosenthal explains in a blog post, is built on the company’s three-part behavior change framework: track, understand, and act. Jawbone tackles employee wellness with Up for Groups. In the work place. 6 January 2014Last updated at 19:00 ET By Matthew Wall Business reporter, BBC News Stress, anxiety and depression were the main causes of absence from work in the UK in 2012 Stress can lead to burn-out, whether you're a chief executive or a shelf stacker. 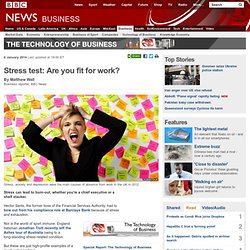 Hector Sants, the former boss of the Financial Services Authority, had to bow out from his compliance role at Barclays Bank because of stress and exhaustion. Nor is the world of sport immune. England batsman Jonathan Trott recently left the Ashes tour of Australia owing to a long-standing stress-related condition. But these are just high-profile examples of a much wider problem. Workers in the UK took an average 5.3 days off work in 2012, according to the 2013 CBI/Pfizer Fit for Purpose survey, with stress, anxiety and depression given as the main causes of absence. Sick leave is costing the UK economy £14bn a year, the report suggests. Wearable Tech Is Plugging Into Health Insurance. Pact Is First Health App To Become An Insurance Plan. EEOC lawsuit against Honeywell asks: ‘When does employee wellness go too far?’ Tags: ACA | ADA | Affordable Care Act | consumer privacy | EEOC | employee discrimination | employee privacy | employee wellness | GINA | HIPAA | Honeywell | Obamacare | 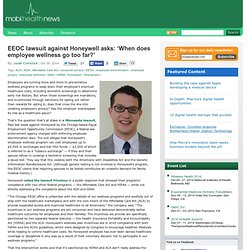 Is The Quantified Employee A Healthier Employee? At Biosyntrx, a Colorado Spring-based nutritional supplement company, every employee comes to work daily armed with their laptop, smartphone, and their Fitbit. 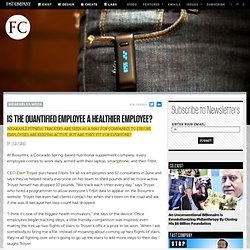 CEO Ellen Troyer purchased Fitbits for all six employees and 12 consultants in June and says they’ve helped nearly everyone on her team to shed pounds and be more active.