Please start with the Pear labled "Warnings" and continue clockwise. 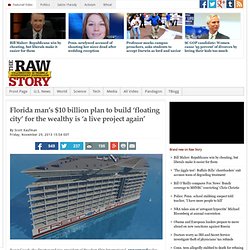 Top 5 things to know about the Floating CIty Project, Feb 2014. BlueNoMore.com - A Definitive Study About Chemtrails & Contrails By A Commercial Pilot Trained And Experienced In Cloud Science. We Stand For NO SYSTEM Kindom (Do No Harm Communities) is the dream for freedom, but it is the dream for the freedom of those around us who also live the dream of freedom, because it is in living for the freedom of others that we get our freedom. 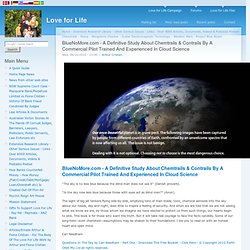 When we live for the dreams of Kindom of those around us, we live life as a gift because we live for (dedicate our lives to) their dream of freedom, truth, peace, joy, abundance, etc, just as they live for our Kindom dreams too. This is true co-creation (cooperation) with no attack on the uniqueness of each of us. When we live this way, we have no need for any man-made system - everything/everyone has already been taken care of by our love for life. Just as we do not have to jump 10 feet across the room to grab our next breath, neither do we have to worry about food, water and shelter because it has all been taken care of as we each co-create Kindoms/Kin-Domains for everyone. Kucinich, Chemtrails and HR 2977 - Contrail Science. One of the more pervasive myths regarding “chemtrails” is that 2008 presidential hopeful Dennis Kuchinich tried to have them banned by an act of congress, but was pressured by the government to modify the act to remove the mention of “chemtrails”. 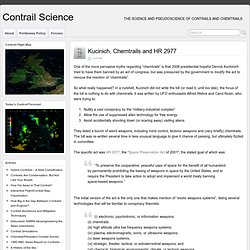 So what really happened? In a nutshell, Kucinich did not write the bill (or read it, until too late), the focus of the bill is nothing to do with chemtrails, it was written by UFO enthusiasts Alfred Webre and Carol Rosin, who were trying to: Nullify a vast conspiracy by the “military-industrial complex”Allow the use of suppressed alien technology for free energyAvoid accidentally shooting down (or scaring away) visiting aliens.

They listed a bunch of weird weapons, including mind control, tectonic weapons and (very briefly) chemtrails. The bill was re-written several time in less unusual language to give it chance of passing, but ultimately fizzled in committee. Who wrote this? With Dr. And also The whole site has a very “new-age” feel to it. . ( Leo_zagami_cellphone_long. Top Ten Reasons: Sandy Hook was an Elaborate Hoax. “[T]he names and ‘contextually identifying information of involved children’ were withheld, including descriptions of the children, their clothing and their belongings”–Reuben F. 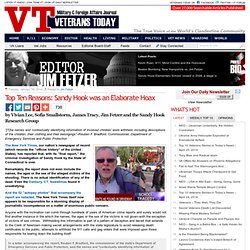 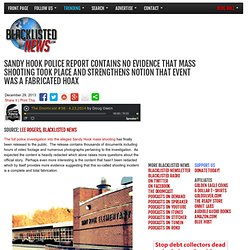 The release contains thousands of documents including hours of video footage and numerous photographs pertaining to the investigation. As expected the content is heavily redacted which alone raises more questions about the official story. Perhaps even more interesting is the content that hasn’t been redacted which by itself provides more evidence suggesting that this so-called shooting incident is a complete and total fabrication. Wormwood Animation. Spanish Astronomers Claim Dwarf Sun Beyond Pluto. The idea of a new planet being discovered in our Solar System is pretty exciting. 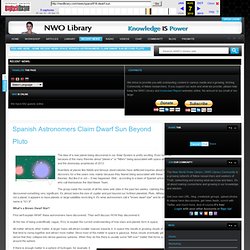 Even more so because of the many theories about "planet-x" or "Nibiru" being associated with space aliens and the doomsday prophecies of 2012. Scientists at places like NASA and famous observatories have deflected inquiries about the discovery for a few years now, mainly because they feared being associated with these "fringe" theories. But like it or not -- it has happened. Well... according to a team of Spanish artronomers who call themselves the StarViewer Team. The group made the rounds of all the news web sites in the past two weeks, claiming they discovered something very significant. What's a Brown Dwarf Star? First we'll explain WHAT these astronomers have discovered. At the risk of being scientifically vague, I'll try to explain the current understanding of how stars and planets form in space. All matter attracts other matter. This Brown Dwarf.

Spanish Astronomers Claim Dwarf Sun Beyond Pluto - Part II - Update. Vatic Note: Our Vatic note on Part I pretty much covers what we have to say, however, the update is even more interesting and I am now even more convinced this is a real event and the powers that be chose now to do their agenda given this opportunity to "never let a good crisis go to waste" and thus take advantage of it for their own ends, which always hurts us and not them. 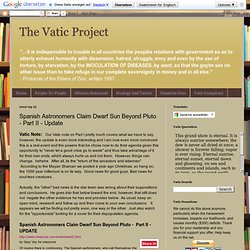 However, things can change. hehehe After all, its the "return of the ancestors and wisemen" According to the Mayan Shaman we posted a year ago Christmas, so hang on, the 1000 year millenium is on its way. Good news for good guys, Bad news for soul-less creatures. Actually, the "other" bad news is the star team was wrong about their suppositions and conclusions. He goes into that below toward the end, however, that still does not negate the other evidence he has and provides below. As usual, keep an open mind, research and follow up and then come to your own conclusions.