Anything online that is of interest to the Tembo Education Group

iPad & iPhone app design techniques. How to Design an iPhone App in Photoshop. In this tutorial, we will use Adobe Photoshop, to design a simple 3-page directory listing app for iPhone. 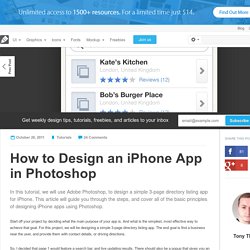 This article will guide you through the steps, and cover all of the basic principles of designing iPhone apps using Photoshop. Start off your project by deciding what the main purpose of your app is. And what is the simplest, most effective way to achieve that goal. For this project, we will be designing a simple 3-page directory listing app. The end goal is find a business near the user, and provide them with contact details, or driving directions.

So, I decided that page 1 would feature a search bar, and live updating results. Page 2 is the information page for the users selected result, it features a larger picture, reviews, location, and contact details. Once you know the essential information your app needs, do some sketches on paper, to plan the rough layout of your app. In this tutorial we will design the first screen of the iPhone app. Step 1: New Document. A Beginner’s Guide to Wireframing. Clash of Clans for Android: What is it, and why is it so popular? A top-down primer of one of Android's most popular games. 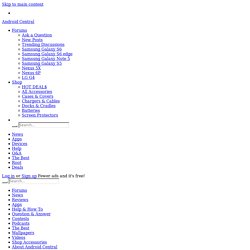 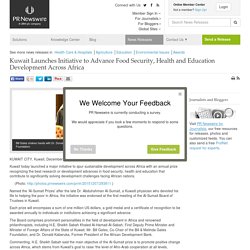 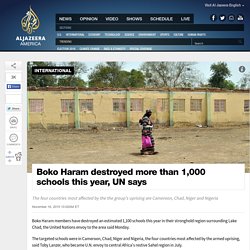 In total, 2.6 million have been forced from their homes by the fighting, 2.2 million of whom are Nigerians, Lanzer said. He made his comments following a tour of the Lake Chad basin region, which touches all four affected countries. The U.N. envoy stressed that while refugees fleeing Boko Haram violence were not currently a significant contributor to Europe's migrant crisis, that could change if the situation around Lake Chad remains dire. "Is that something that could be on the cards? Absolutely," Lanzer told journalists, warning that with a rising population, crippling poverty and continuing violence, significant numbers of young men around Lake Chad could increasingly try to migrate towards Europe.

Lanzer offered broad praise for Buhari's response to the crisis. Al Jazeera and Agence France-Presse. 2015 Global Terrorism Index: Deaths From Terrorism Increased 80% Last Year to the... Institute for Economics & Peace (IEP) Logo LONDON, November 17, 2015 /PRNewswire/ -- 32,658 people were killed by terrorism in 2014 compared to 18,111 in 2013: the largest increase ever recorded Boko Haram and ISIL were jointly responsible for 51% of all claimed global fatalities in 2014 Boko Haram has overtaken ISIL as world's deadliest terrorist group Countries suffering over 500 deaths increased by 120% to 11 countries 78% of all deaths and 57% of all attacks occurred in just five countries: Afghanistan, Iraq, Nigeria, Pakistan and Syria Iraq continues to be the country most impacted by terrorism with 9,929 terrorist fatalities the highest ever recorded in a single country Nigeria experienced the largest increase in terrorist activity with 7,512 deaths in 2014, an increase of over 300% since 2013. 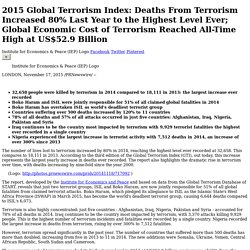 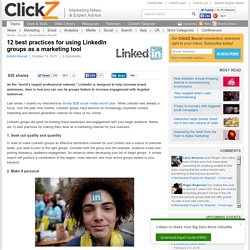 Here is how you can use its groups feature to increase engagement with targeted audiences. Last winter, I shared my tried-and-true 30-day B2B social media launch plan. While LinkedIn was already a focus, over the past nine months, LinkedIn groups have become an increasingly important content marketing and demand generation channel for many of my clients. LinkedIn groups are great for building brand awareness and engagement with your target audience. Below are 12 best practices for making them work as a marketing channel for your business. LinkedIn Groups 101: How to Build an Engaged Community on LinkedIn. Hey, you – yeah, we’re talking to you. 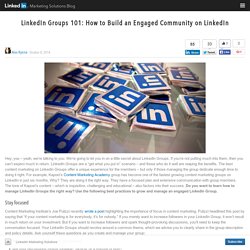 We’re going to let you in on a little secret about LinkedIn Groups. If you’re not putting much into them, then you can’t expect much in return. LinkedIn Groups are a “get what you put in” scenario – and those who do it well are reaping the benefits. The best content marketing on LinkedIn Groups offer a unique experience for the members – but only if those managing the group dedicate enough time to doing it right. For example, Kapost’s Content Marketing Academy group has become one of the fastest growing content marketing groups on LinkedIn in just six months. Stay focused. Lessons From 5 of the Most Successful Marketing Campaigns of the Decade. Understatement time: Marketing has changed a ton in the last five years. 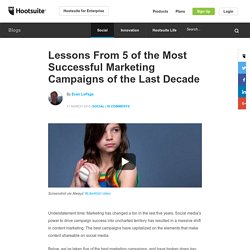 Social media’s power to drive campaign success into uncharted territory has resulted in a massive shift in content marketing. The best campaigns have capitalized on the elements that make content shareable on social media. Below, we’ve taken five of the best marketing campaigns, and have broken down key elements that contributed to their explosive success. A Social Media Audit Template for Social Media Managers. A key part to creating a social media marketing plan is conducting a social media audit. 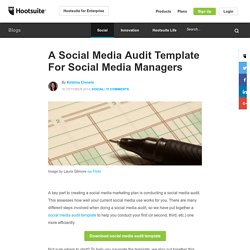 9 point Checklist for conducting Social Media Strategy Audit. Today I am going to share with you the checklist I frequently used to conduct social media strategy audit. 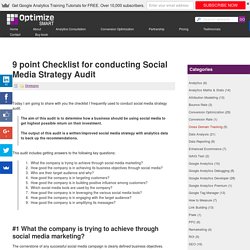 The aim of this audit is to determine how a business should be using social media to get highest possible return on their investment. The output of this audit is a written/improved social media strategy with analytics data to back up the recommendations. This audit includes getting answers to the following key questions: Credit Suisse's Brazil CEO Sees Crisis Dragging On for Years. Blog.hootsuite.