Robert L. Forward. This is about the physicist and science fiction writer. 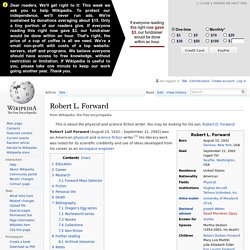 You may be looking for his son, Robert D. Forward. Robert Lull Forward (August 15, 1932 – September 21, 2002) was an American physicist and science fiction writer.[1] His literary work was noted for its scientific credibility and use of ideas developed from his career as an aerospace engineer. Education[edit] James Clerk Maxwell. James Clerk Maxwell FRS FRSE (13 June 1831 – 5 November 1879) was a Scottish[2][3] scientist in the field of mathematical physics.[4] His most notable achievement was to formulate the classical theory of electromagnetic radiation, bringing together for the first time electricity, magnetism, and light as different manifestations of the same phenomenon. 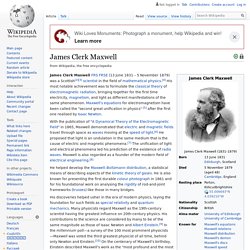 Maxwell's equations for electromagnetism have been called the "second great unification in physics" [5] after the first one realised by Isaac Newton. With the publication of "A Dynamical Theory of the Electromagnetic Field" in 1865, Maxwell demonstrated that electric and magnetic fields travel through space as waves moving at the speed of light.[6] He proposed that light is an undulation in the same medium that is the cause of electric and magnetic phenomena.[7] The unification of light and electrical phenomena led his prediction of the existence of radio waves. Contents Life. Fritz Zwicky. Fritz Zwicky (/ˈtsvɪki/;[1] German: [ˈtsvɪki]; February 14, 1898 – February 8, 1974) was a Swiss astronomer. 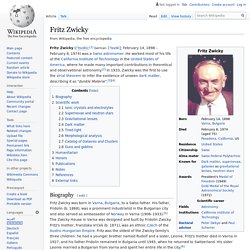 He worked most of his life at the California Institute of Technology in the United States of America, where he made many important contributions in theoretical and observational astronomy.[2] In 1933, Zwicky was the first to use the virial theorem to infer the existence of unseen dark matter, describing it as "dunkle Materie".[3][4] Biography[edit] Fritz Zwicky was born in Varna, Bulgaria, to a Swiss father. His father, Fridolin (b. 1868), was a prominent industrialist in the Bulgarian city and also served as ambassador of Norway in Varna (1908–1933).[5] The Zwicky House in Varna was designed and built by Fridolin Zwicky. Fritz's mother, Franziska Vrček (b. 1871), was an ethnic Czech of the Austro-Hungarian Empire. He was responsible for positing numerous cosmological theories that have a profound impact on the understanding of our universe today. Frank Shuman. Shuman sunengine 1907 Photo: Technical World magazine, September 1907 Frank Shuman (January 23, 1862 -- April 28, 1918) was an American inventor, engineer and solar energy pioneer known for his work on solar engines, especially those that used solar energy to heat water that would produce steam. 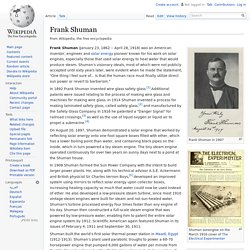 Shuman's visionary ideals, most of which were not publicly accepted until sixty years later, were evident when he made the statement, "One thing I feel sure of... is that the human race must finally utilize direct sun power or revert to barbarism. " In 1892 Frank Shuman invented wire glass safety glass.[1] Additional patents were issued relating to the process of making wire glass and machines for making wire glass. In 1914 Shuman invented a process for making laminated safety glass, called safety glass,[2] and manufactured by the Safety Glass Company. In 1916 he patented a "Danger Signal" for railroad crossings,[3] as well as the use of liquid oxygen or liquid air to propel a submarine.[4] Michael Faraday. English scientist Faraday's Laboratory at the Royal Institution (1870 engraving) Michael Faraday FRS (; 22 September 1791 – 25 August 1867) was an English scientist who contributed to the study of electromagnetism and electrochemistry. 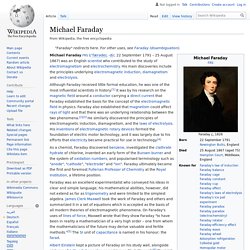 His main discoveries include the principles underlying electromagnetic induction, diamagnetism and electrolysis. As a chemist, Faraday discovered benzene, investigated the clathrate hydrate of chlorine, invented an early form of the Bunsen burner and the system of oxidation numbers, and popularised terminology such as "anode", "cathode", "electrode" and "ion". Faraday ultimately became the first and foremost Fullerian Professor of Chemistry at the Royal Institution, a lifetime position. Faraday was an excellent experimentalist who conveyed his ideas in clear and simple language; his mathematical abilities, however, did not extend as far as trigonometry and were limited to the simplest algebra. 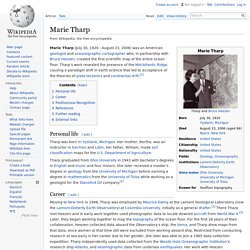 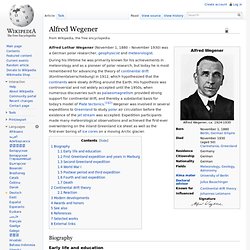 During his lifetime he was primarily known for his achievements in meteorology and as a pioneer of polar research, but today he is most remembered for advancing the theory of continental drift (Kontinentalverschiebung) in 1912, which hypothesized that the continents were slowly drifting around the Earth. His hypothesis was controversial and not widely accepted until the 1950s, when numerous discoveries such as palaeomagnetism provided strong support for continental drift, and thereby a substantial basis for today's model of Plate tectonics.[1][2] Wegener was involved in several expeditions to Greenland to study polar air circulation before the existence of the jet stream was accepted. 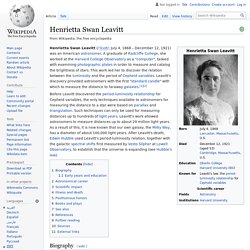 A graduate of Radcliffe College, Leavitt started working at the Harvard College Observatory as a "computer" in 1893, examining photographic plates in order to measure and catalog the brightness of stars. Though she received little recognition in her lifetime, it was her discovery that first allowed astronomers to measure the distance between the Earth and faraway galaxies.

She explained her discovery: "A straight line can readily be drawn among each of the two series of points corresponding to maxima and minima, thus showing that there is a simple relation between the brightness of the variables and their periods. Early years and education[edit] Career[edit] Pickering assigned Leavitt to study "variable stars," whose luminosity varies over time. Influence[edit] Annie Jump Cannon. Annie Jump Cannon (December 11, 1863 – April 13, 1941) was an American astronomer whose cataloging work was instrumental in the development of contemporary stellar classification. 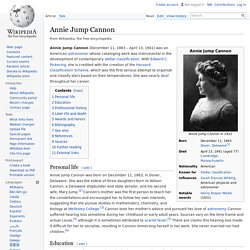 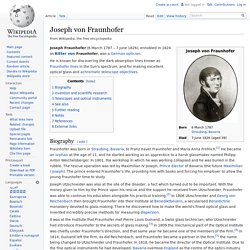 He is known for discovering the dark absorption lines known as Fraunhofer lines in the Sun's spectrum, and for making excellent optical glass and achromatic telescope objectives. Biography[edit] Fraunhofer was born in Straubing, Bavaria, to Franz Xaver Fraunhofer and Maria Anna Frohlich.[1] He became an orphan at the age of 11, and he started working as an apprentice to a harsh glassmaker named Philipp Anton Weichelsberger. In 1801, the workshop in which he was working collapsed and he was buried in the rubble. The rescue operation was led by Maximilian IV Joseph, Prince Elector of Bavaria (the future Maximilian I Joseph). His illustrious career eventually earned him an honorary doctorate from the University of Erlangen in 1822. Invention and scientific research[edit] Fraunhofer demonstrating the spectroscope. Joseph von Fraunhofer.