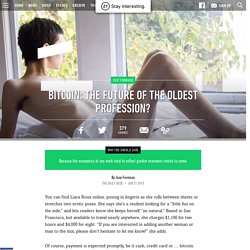 She says she’s a student looking for a “little fun on the side,” and lets readers know she keeps herself “au natural.” Based in San Francisco, but available to travel nearly anywhere, she charges $1,100 for two hours and $4,000 for eight. “If you are interested in adding another woman or man to the mix, please don’t hesitate to let me know!” She adds. Of course, payment is expected promptly, be it cash, credit card or … bitcoin. Bitcoin. By some estimates, an average of $50 million in bitcoin trade takes place per day.

Indeed, for many escorts these days, bitcoin just makes good business sense. But discretion has its downsides, especially in sex work. By some estimates, an average of $50 million in bitcoin trade takes place per day. The blockchain ledger might be public, but it’s massive (more than 35 gigabytes at time of writing) and transactions are quasi-anonymous. Everything You Need to Disable in Windows 10 « Windows Tips. Betali.st. English Canadian IBM - IBM Certified Used Equipment - Canada. Ultimate security software guide - choose the suite that's right for you. A thorough test of the nine leading security suites on the market today. 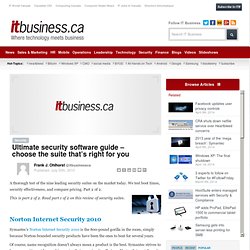 We test boot times, security effectiveness, and compare pricing. Part 2 of 2. This is part 2 of 2. Read part 1 of 2 on this review of security suites. Norton Internet Security 2010 Symantec’s Norton Internet Security 2010 is the 800-pound gorilla in the room, simply because Norton-branded security products have been the ones to beat for several years. Of course, name recognition doesn’t always mean a product is the best. Internet protection Norton’s firewall is very easy to set up and controls Internet access for known good programs.

One interesting feature is Symantec’s Quorum reputation index. Related Slideshow: Inside Symantec’s Security Operations Center Norton also utilizes its SONAR2 engine, which, according to Symantec, uses all sources of information, including the reputation index, to judge whether a file should be classified as suspicious and subjected to more in-depth testing. Usability Coming soon Conclusion. Five tricks workers use to visit blocked Web sites - Page 3. Here are five techniques–some simple, some more advanced–that your employees may be using to access the sites you don’t want them to visit while on the job. 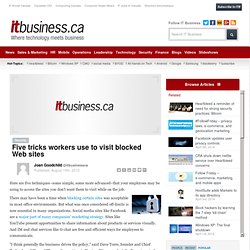 There may have been a time when blocking certain sites was acceptable in most office environments. But what was once considered off-limits is now essential in many organizations. Social media sites like Facebook are a major part of many companies’ marketing strategy. Sites like YouTube present opportunities to share information about products or services visually. And IM and chat services like G-chat are free and efficient ways for employees to communicate. “I think generally the business drives the policy,” said Dave Torre, founder and Chief Technology Officer of IT consultancy Atomic Fission. Related stories New Big Brother like service monitors employee use of social sites Seven social network security mistakes you can’t afford to make Social networks teeming with spam and malware.

How-to-jailbreak-and-unlock-your-iphone: Personal Finance News from Yahoo! Finance. This elite group of tech moguls, hedge-funders, athletes and entertainers are hovering under billionaire status with a strong chance of breaking into the Forbes 400 ranks this decade. 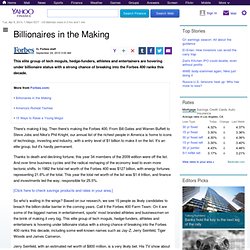 There's making it big. Then there's making the Forbes 400. From Bill Gates and Warren Buffett to Steve Jobs and Nike's Phil Knight, our annual list of the richest people in America is home to icons of technology, investing and industry, with a entry level of $1 billion to make it on the list. It's an elite group, but it's hardly permanent. Thanks to death and declining fortune, this year 34 members of the 2009 edition were off the list. [Click here to check savings products and rates in your area.] So who's waiting in the wings? Jerry Seinfeld, with an estimated net worth of $800 million, is a very likely bet. Another likely candidate is producer Jerry Bruckheimer, worth $850 million.