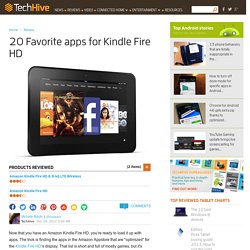 The trick is finding the apps in the Amazon Appstore that are "optimized" for the Kindle Fire HD’s display. That list is short and full of mostly games, but it's growing as more apps embrace the world of high-pixel density tablets. The best part: Most of these apps are free, though some require you to tough out the ads or sign up for a service. Reading Kindles are for reading, right? OverDrive Media Console You can supplement the books in your Kindle library with books from your local library, or one of many libraries across the country that will lend to nonresidents, with the OverDrive Media Console (free). Goodreads If you're drowning in books that you want to read and want a good way to keep track of them, Goodreads (free) can help out. Pocket Formerly known as Read It Later, Pocket (free) is a great way to take the web with you when you don't have an Internet connection. 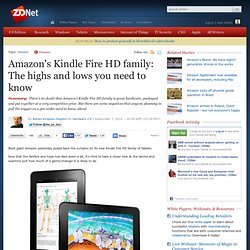 Now that the fanfare and hype has died down a bit, it's time to take a closer look at the device and examine just how much of a game-changer it is likely to be. There's no doubt that Amazon's original Kindle Fire tablet was a huge hit. It earned over 10,000 5-star customer reviews, it remained the number-one best-selling product on Amazon since its introduction, and it captured 22 percent of U.S. tablet sales in nine months. Amazon Kindle Fire HD - Tablets. The Kindle Fire HD (2013) is Amazon's new ultrabudget tablet that starts at $139. 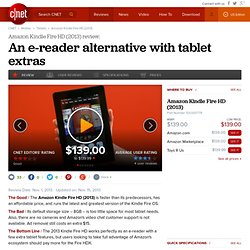 At just $20 more than the company's e-ink Kindle Paperwhite reader, it's at a great price and if all you plan to do is stream videos and music, read books, do some light gaming, and occasionally surf the Web, it will certainly meet your needs. The problems arise if you wish to do anything more. With this entry-level model -- basically the 2012 Fire HD with updated hardware -- you're giving up cameras, and settling for a miniscule amount of storage. Indeed, the 8GB of storage in the $139 model actually works out to less than 5GB of usable space; that's not enough to fit most HD movies or more than a couple of episodes of an HD TV show.

Throw in a couple of high-end games like Asphalt 8 and the space fills up swiftly. That's why I recommend starting with the $169, 16GB version of the tablet. Hands-On With Amazon's New Kindle Fire HD. Playing with fire. 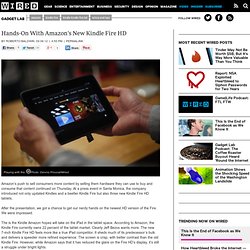 Photo: Dennis Provost/Wired Amazon’s push to sell consumers more content by selling them hardware they can use to buy and consume that content continued on Thursday. At a press event in Santa Monica, the company introduced not only updated Kindles and a beefier Kindle Fire but also three new Kindle Fire HD tablets. After the presentation, we got a chance to get our nerdy hands on the newest HD version of the Fire. We were impressed. Kindle Fire HD vs. iPad vs. Nexus 7 vs. Galaxy Tab: How Amazon's New Tablet Compares To The Competition. Amazon.com Inc.'s new Kindle Fire models are the latest challengers to the iPad and come amid expectations that Apple will start selling a mini iPad soon. 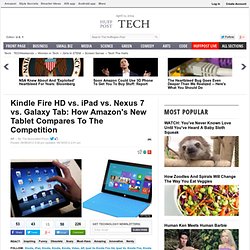 Here's a look at the key differences between a mid-range model closest to the iPad, along with the original Kindle Fire, the iPad and other leading competitors. Amazon.com Inc.'s mid-range Kindle Fire HD (available Nov. 20): — Price: $299 for 16 gigabytes of storage — Screen size: 8.9 inches diagonally — Screen resolution: 1920 by 1200 pixels — Weight: 1.25 pounds. Kindle Fire HD 8.9" Tablet - Stunning 8.9" Screen and Dolby Audio. Kindle Fire HD: Better, Faster, Cheaper—Bigger! (Updated: HOLY CRAP) Kindle Paperwhite - Touch Screen Ereader with Built-In Light. Kindle - Best-Selling Ereader - Only $69. How to decide: should you buy a big Kindle Fire HD or an iPad? All projects: DIY-IT Project GuideThis project: How to decide: tech buying guides for DIYers and small business Unless you've been living under a rock, you know that Amazon has launched its latest round of Kindle Fires, the HD series. 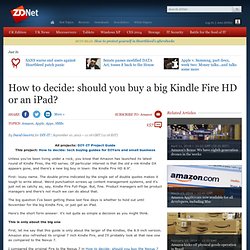 Of particular interest is that the old e-ink Kindle DX appears gone, and there's a new big boy in town: the Kindle Fire HD 8.9". First: lousy name. The double prime indicated by the single set of double quotes makes it tough to write about. Weird punctuation screws up content management systems, and it's just not as catchy as, say, Kindle Fire Full-Page. The big question I've been getting these last few days is whether to hold out until November for the big Kindle Fire, or just get an iPad.

Here's the short form answer: it's not quite as simple a decision as you might think. This is only about the big one First, let me say that this guide is only about the larger of the Kindles, the 8.9 inch version.