Bay Area businessman Tad Taube is the chairman of Taube Philanthropies and board president emeritus of the Koret Foundation in San Francisco. He is chairman and founder of the Woodmont Companies, a diversified real estate investment and management organization.

Taube Philanthropies sur Twitter : "This Shabbat, Oct 25-26, we ask that you help us turn a global campaign of solidarity into a powerful force against hate. Attend services at your local synagogue, urge others to join the movement and lend your support t. Taube Philanthropies sur Twitter : "Congratulations to Prof. Joanna Lisek for being awarded the 2019 Józef A. Gierowski & Chone Shmeruk Prize for her book Kol Ishe: The Voice of Women in Yiddish Poetry. Lisek is a faculty member of the Taube Department of.

Taube Philanthropies on LinkedIn: "Tonight at 7pm our friends at the Jewish Community Center of San Francisco are hosting a live podcast recording of Tablet Magazine's Unorthodox! Special guests include Bari Weiss and Andrew Marantz. Use TAUBE50 for 50% o. Taube Philanthropies on LinkedIn: "Chuck Fishman Photography, along with a panel of experts on Polish-Jewish current events and history, discuss his latest photo exhibition - "ReGeneration: Jewish Life in Poland". Join us on Nov 18 (12pm - 1:30 pm) at Hea. 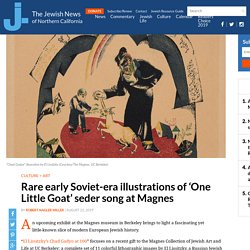 “El Lissitzky’s Chad Gadyo at 100” focuses on a recent gift to the Magnes Collection of Jewish Art and Life at UC Berkeley: a complete set of 11 colorful lithographic images by El Lissitzky, a Russian Jewish avant-garde artist born Eleazar Markovich Lisitskii in 1890. The works illustrate the popular Passover seder song that starts off, “One little goat, one little goat, which my father bought for two zuzim.”

The exhibit opens Tuesday, Aug. 27 and will be on display through May 29, 2020. A show highlighting the song, perhaps better known in modern times as “Chad Gadya,” is significant, says Magnes curator Francesco Spagnolo, if for no other reason than that these El Lissitzky illustrations are quite rare. “It was a time of great hope for many Jews,” he adds. “El Lissitzky’s Chad Gadyo at 100” Gallery hours are 11 a.m.-4 p.m. INTERNATIONAL DEBATES ON HUMAN RIGHTS HOSTED BY ‘NEVER AGAIN’ AT POL’AND’ROCK FESTIVAL - "NEVER AGAIN" ASSOCIATION. 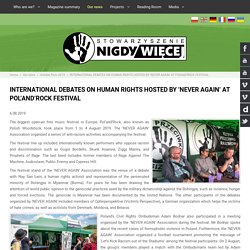 The ‘NEVER AGAIN’ Association organized a series of anti-racism activities accompanying the festival. The festival line up included internationally known performers who oppose racism and discrimination such as Gogol Bordello, Skunk Anansie, Ziggy Marley, and Prophets of Rage. The last band includes former members of Rage Against The Machine, Audioslave, Public Enemy and Cypress Hill. The festival stand of the ‘NEVER AGAIN’ Association was the venue of a debate with Nay San Lwin, a human rights activist and representative of the persecuted minority of Rohingya in Myanmar (Burma). For years he has been drawing the attention of world public opinion to the genocidal practices used by the military dictatorship against the Rohingya, such as violence, hunger and forced evictions.