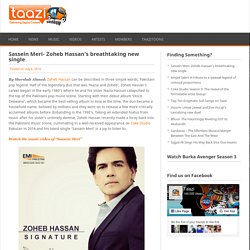 Half of the legendary duo that was ‘Nazia and Zoheb’, Zoheb Hassan’s career began in the early 1980’s where he and his sister Nazia Hassan catapulted to the top of the Pakistani pop music scene. Starting with their debut album ‘Disco Deewane’, which became the best-selling album in Asia at the time, the duo became a household name, beloved by millions and they went on to release a few more critically acclaimed albums before disbanding in the 1990’s.

Taking an extended hiatus from music after his sister’s untimely demise, Zoheb Hassan recently made a foray back into the Pakistani music scene, culminating in a well-received appearance on Coke Studio Pakistan in 2014 and his latest single ‘Sassein Meri’ is a joy to listen to. Watch the music video of “Sassein Meri” ‘Sassein Meri’ is the pop sensation’s newest release, and comes complete with a music video. Related November 10, 2015. Download billo returns aithay rakh – Taazi.com. Abrar ul Haq, the king of Baghra, who got fame from his very first song, Billo Day Ghar, launched his new album Billo Returns-Aithay Rakh in the year 2016 after a long gap of almost 10 years. 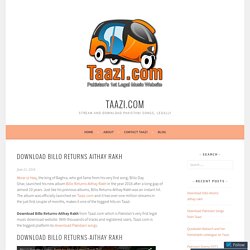 Just like his previous albums, Billo Returns-Aithay Rakh was an instant hit. The album was officially launched on Taazi.com and it has over one million streams in the just first couple of months, makes it one of the biggest hits on Taazi. Download Billo Returns-Aithay Rakh from Taazi.com which is Pakistan’s very first legal music download website. 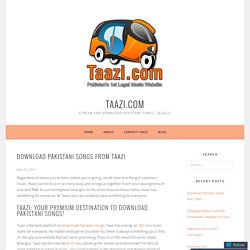 Music connects us in so many ways and brings us together. From your usual genres of pop and R&B, to our homegrown bhangra, to the more obscure heavy metal, music has something for everyone. At Taazi.com, we certainly have something for everyone. Taazi is the best platform to download Pakistani songs. Taazi has a song, an OST or a music video for everyone. Taazi.com is a unique concept. Like this: Like Loading... Aithay Rakh - Billo Return Album. Aithay Rakh - Billo Returns. Pakistan's 1st Legal Music Website & App - Delivering Digital Content. Quratulain Balouch. Sajjad Ali. Aithay Rakhy by Abrar ul Haq. Aithay Rakh- A comeback worthy of one of Pakistan’s top bhangra acts. By Shershah Ahmed: Abrar Ul Haq may have taken a hiatus from making music to focus on charitable foundations and a foray into politics, but his musical legacy remains very much intact. 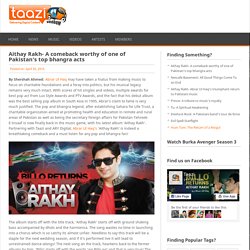 With scores of hit singles and videos, multiple awards for best pop act from Lux Style Awards and PTV Awards, and the fact that his debut album was the best selling pop album in South Asia in 1995, Abrar’s claim to fame is very much justified. The pop and bhangra legend, after establishing Sahara for Life Trust, a charitable organization aimed at promoting health and education in remote and rural areas of Pakistan as well as being the secretary foreign affairs for Pakistan Tehreek-E-Insaaf is now finally back in the music game, with his latest album ‘Aithay Rakh’. 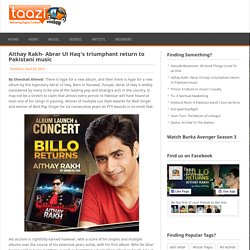 Born in Narowal, Punjab, Abrar Ul Haq is widely considered by many to be one of the leading pop and bhangra acts in the country. It may not be a stretch to claim that almost every person in Pakistan will have heard at least one of his songs in passing. Winner of multiple Lux Style Awards for Best Singer and winner of Best Pop Singer for six consecutive years on PTV Awards is no small feat. His acclaim is rightfully earned however, with a score of hit singles and multiple albums over the course of his extensive years active, with his first album ‘Billo De Ghar’ having sold in huge numbers as well as becoming a bestselling album in South Asia at the time of its release in 1995. Inteha-e-Rock However the time has finally come for him to make his comeback to the Pakistani music scene and who better than to partner for this endeavor than with Taazi and ARY? Related.