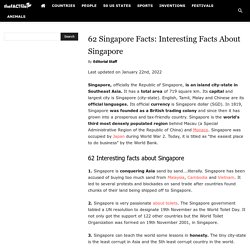 It has a total area of 719 square km. Its capital and largest city is Singapore (city-state). English, Tamil, Malay and Chinese are its official languages. Its official currency is Singapore dollar (SGD). 62 Interesting facts about Singapore 1. 2. 3. 4. 5. Flag of Singapore 6. 7. 9 facts. Single Use Plastic Disposables in Singapore. How will Singapore defuse a 16-year waste timebomb? Singapore is one of the world’s most efficient, liveable, and prosperous cities. 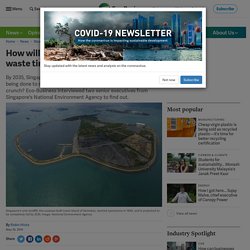 But the tropical city-state is struggling in one important area—how it manages waste. The country’s streets, parks and waterways are famously clean, thanks to a well-tuned rubbish collection system that is the envy of Southeast Asia. But as the amount of waste it produces grows—solid waste generated has increased by almost two thirds in under two decades, from 4.7 million tonnes in 2000 to 7.7 million tonnes in 2018—the land-scarce island is running out of space to manage it. Pulau Semakau, Singapore’s only landfill, is filling up rapidly, and strategies to avoid filling the site completely by 2035 as projected are not working. Can Singapore really be a zero waste nation? A few Saturdays ago, in a shopping mall in the east of the island, Singapore’s Minister of Environment and Water Resources (MEWR) declared 2019 the Year Towards Zero Waste. 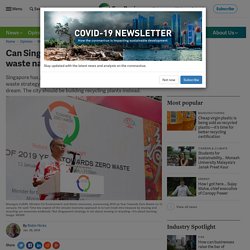 The aim for the year ahead is to raise awareness of the tiny country’s massive waste problem, and to, as Minister Masagos Zulkifli told his audience of Saturday shoppers at Our Tampines Hub, take a “circular” approach to managing a consumer-driven economy that uses more resources per person than any country in Asia Pacific. A story in national newspaper The Straits Times quoted the minister’s ambition for Singapore to turn “trash into treasure” by reusing and recycling resources, and cited various examples of how local firms were, for example, using discarded fruit peels to make detergent and creating jobs in the process. Singapore reuses barely any of its waste. Of the 800 million kilograms of plastic waste generated last year, 94 per cent was incinerated. Then there’s the impact of incineration on behaviour. 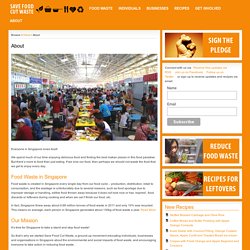 We spend much of our time enjoying delicious food and finding the best makan places in this food paradise. But there’s more to food than just eating. If we love our food, then perhaps we should not waste the food that we get to enjoy every day. Food Waste in Singapore Food waste is created in Singapore every single day from our food cycle – production, distribution, retail to consumption, and the wastage is unfortunately due to several reasons, such as food spoilage due to improper storage or handling, edible food thrown away because it does not look nice or has ‘expired’, food discards or leftovers during cooking and when we can’t finish our food, etc. 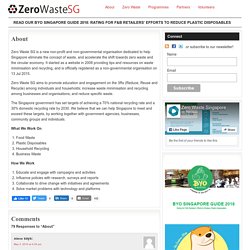 It started as a website in 2008 providing tips and resources on waste minimisation and recycling, and is officially registered as a non-governmental organisation on 13 Jul 2015. Zero Waste SG aims to promote education and engagement on the 3Rs (Reduce, Reuse and Recycle) among individuals and households; increase waste minimisation and recycling among businesses and organisations; and reduce specific waste. The Singapore government has set targets of achieving a 70% national recycling rate and a 30% domestic recycling rate by 2030. We believe that we can help Singapore to meet and exceed these targets, by working together with government agencies, businesses, community groups and individuals.

What We Work On. Zero waste infographic new. 9 tips for living with less plastic. 9 ways to reduce plastic in your school.