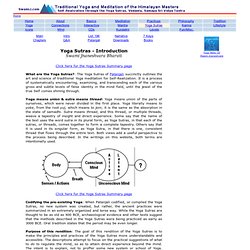 : The Yoga Sutras of Patanjali succinctly outlines the art and science of traditional Yoga meditation for Self-Realization. It is a process of systematically encountering, examining, and transcending each of the various gross and subtle levels of false identity in the mind field, until the jewel of the true Self comes shining through. Yoga means union & sutra means thread: Yoga means union of the parts of ourselves, which were never divided in the first place. Yoga literally means to yoke, from the root yuj, which means to join; it is the same as the absorption in the state of samadhi. Codifying the pre-existing Yoga: When Patanjali codified, or compiled the Yoga Sutras, no new system was created, but rather, the ancient practices were summarized in an extremely organized and terse way. 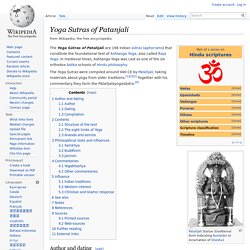 In medieval times, Ashtanga Yoga was cast as one of the six orthodox āstika schools of Hindu philosophy. The Yoga Sutras were compiled around 400 CE by Patañjali, taking materials about yoga from older traditions. Together with his commentary they form the Pātañjalayogaśāstra. Author and dating[edit] Author[edit] The Indian tradition attributes the work to Patañjali. Dating[edit] The most recent assessment of Patañjali's date, developed in the context of the first critical edition ever made of the Yoga Sūtras and bhāṣya based on a study of the surviving original Sanskrit manuscripts of the work, is that of Philipp A. Compilation[edit] The Yoga Sutras are a composite of various texts. Contents[edit] Structure of the text[edit] The eight limbs of Yoga[edit] Yama refers to the five abstentions: how we relate to the external world. 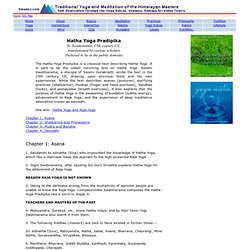 It is said to be the oldest surviving text on Hatha Yoga. Swami Swatmarama, a disciple of Swami Goraknath, wrote the text in the 15th century CE, drawing upon previous texts and his own experiences. While the text describes asanas (postures), purifying practices (shatkarma), mudras (finger and hand positions), bandhas (locks), and pranayama (breath exercises), it also explains that the purpose of Hatha Yoga is the awakening of kundalini (subtle energy), advancement to Raja Yoga, and the experience of deep meditative absorption known as samadhi. See also: Hatha Yoga and Raja Yoga Chapter 1: Asana Chapter 2: Shatkarma and Pranayama Chapter 3: Mudra and Bandha Chapter 4: Samadhi Chapter 1: Asana 1. 2. 3. 4. 5. 6. 7. 8. 9. 10. 11. 12. 13. 14. 15. 16. 17. 18. Upanishads. Upanishads SwamiJ.com Upanishad is the subtler, mystical or yogic teachings of the philosophy and practices leading to the direct experience of the center of consciousness, the absolute reality. 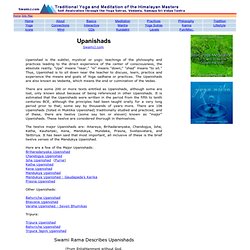 "Upa" means "near;" "ni" means "down;" "shad" means "to sit. " Thus, Upanishad is to sit down near the teacher to discuss, learn, practice and experience the means and goals of Yoga sadhana or practices. The Upanishads are also known as Vedanta, which means the end or culmination of the Vedas. There are some 200 or more texts entitled as Upanishads, although some are lost, only known about because of being referenced in other Upanishads. The twelve major Upanishads are: Aitareya, Brihadaranyaka, Chandogya, Isha, Katha, Kauhsitaki, Kena, Mandukya, Mundaka, Prasna, Svetasvatara, and Taittiriya. Other Upanishads: Bahvricha Upanishad Bhavana Upanishad Varaha Upanishad - Seven Bhumikas Tripura: Tripura Upanishad Bahvricha Upanishad Tripura Tapini Upanishad Swami Rama Describes Upanishads.