0Yamas. 1Ahimsa. Ahimsa (Sanskrit: अहिंसा; IAST: ahimsā, Pāli:[1] avihiṃsā) is a term meaning 'not to injure' and 'compassion'.[2][3] The word is derived from the Sanskrit root hiṃs – to strike; hiṃsā is injury or harm, a-hiṃsā is the opposite of this, i.e. cause no injury, do no harm.[4][5] Ahimsa is also referred to as nonviolence, and it applies to all living beings—including all animals—according to many Indian religions.[6] Ahimsa is one of the cardinal virtues[7] and an important tenet of 3 major religions (Jainism, Hinduism, and Buddhism). 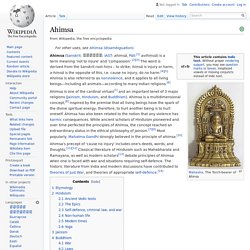 Ahimsa is a multidimensional concept,[8] inspired by the premise that all living beings have the spark of the divine spiritual energy; therefore, to hurt another being is to hurt oneself. Ahimsa has also been related to the notion that any violence has karmic consequences. Etymology[edit] There is a debate on the origins of the word Ahimsa, and how its meaning evolved.

Ancient texts use ahimsa to mean non-injury, a broader concept than non-violence. War Pacifism. 2Satya. Satya or Sathya is a central concept in Indian religions. 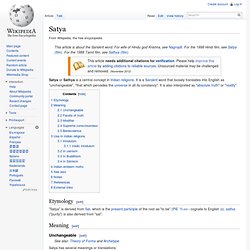 It is a Sanskrit word that loosely translates into English as "unchangeable", "that which pervades the universe in all its constancy". It is also interpreted as "absolute truth" or "reality". Etymology[edit] Meaning[edit] Unchangeable[edit] Satya has several meanings or translations: "unchangeable""that which has no distortion""that which is beyond distinctions of time, space, and person""that which pervades the universe in all its constancy""absolute truth""reality". Facets of truth[edit] There are many references, properties and explanations of truth by Hindu sages that explain varied facets of truth, such as:

3Asteya. Asteya is a Sanskrit word meaning "avoidance of stealing" or "non-stealing". 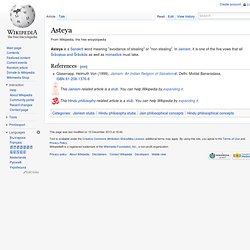 4Brahmacharya. Among the Hindu monastic as well as sramanic traditions, Brahmacharya is the term used for the practice of self-imposed celibacy that is generally considered an essential prerequisite for spiritual practice. 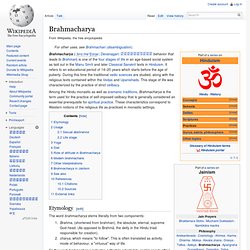 These characteristics correspond to Western notions of the religious life as practiced in monastic settings. Etymology[edit] The word brahmacharya stems literally from two components: 5Dhriti. The ten yamas, or the controls and restraints every ideal Hindu should follow -- as interpreted by Satguru Sivaya Subramuniyaswami. 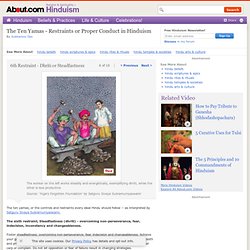 The sixth restraint, Steadfastness (dhriti) - overcoming non-perseverance, fear, indecision, inconstancy and changeableness. Foster steadfastness, overcoming non-perseverance, fear, indecision and changeableness. Achieve your goals with a prayer, purpose, plan, persistence and push. Be firm in your decisions. Avoid sloth and procrastination. Reproduced with permission from Himalayan Academy Publications. 6Kshama. Kshama is a Sanskrit word that relates to the acts of patience, releasing time and functioning in the now. 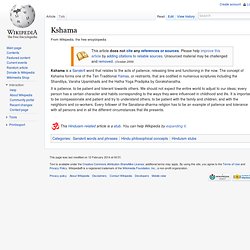 The concept of Kshama forms one of the Ten Traditional Yamas, or restraints, that are codified in numerous scriptures including the Shandilya, Varaha Upanishads and the Hatha Yoga Pradipika by Gorakshanatha. It is patience, to be patient and tolerant towards others. We should not expect the entire world to adjust to our ideas; every person has a certain character and habits corresponding to the ways they were influenced in childhood and life. 7Daya. This concept says to not ignore tragedies that take place in the world but to face them head-on and do whatever is possible within ones means. 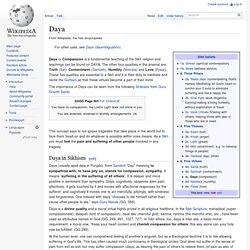 As a Sikh you must feel the pain and suffering of other people involved in any tragedy. Daya in Sikhism[edit] Daya (usually spelt daia in Punjabi), from Sanskrit "Day" meaning to sympathize with, to have pity on, stands for compassion, sympathy. It means ‘suffering in the suffering of all others’. It is deeper and more positive in sentiment than sympathy. Daya is a divine quality and a moral virtue highly prized in all religious traditions. At the human level, one can comprehend feeling of another’s anguish, but as a theological doctrine it is to risk allowing suffering in God’s life. 8Arjava. The ten yamas, or the controls and restraints every ideal Hindu should follow - - as interpreted by Satguru Sivaya Subramuniyaswami. 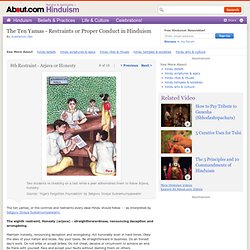 The eighth restraint, Honesty (arjava) - straightforwardness, renouncing deception and wrongdoing. Maintain honesty, renouncing deception and wrongdoing. Act honorably even in hard times. Obey the laws of your nation and locale. Pay your taxes. Reproduced with permission from Himalayan Academy Publications. 9Mitahara. The ten yamas, or the controls and restraints every ideal Hindu should follow - - as interpreted by Satguru Sivaya Subramuniyaswami. 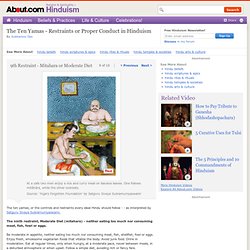 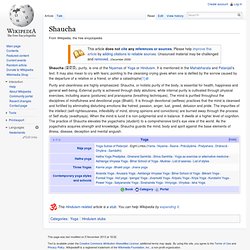 It is mentioned in the Mahabharata and Patanjali's text. It may also mean to cry with tears; pointing to the cleansing crying gives when one is defiled by the sorrow caused by the departure of a relative or a friend, or after a catastrophe[1]. Purity and cleanliness are highly emphasized.