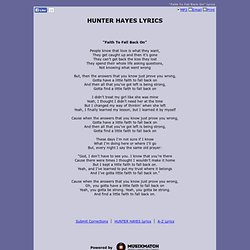 HUNTER HAYES lyrics are property and copyright of their owners. " Bow and Arrow made of Feathers. Medieval Hunting - Weapons, Uses and Hunters. Hunting during the Dark Ages was important for survival only in the early Middle Ages. As new techniques for farming were discovered and used, sedentarism became more common rendering hunting (for survival) virtually useless. In the early Medieval Times, for the hunter who killed to survive, education had to be given first. Educating a hunter began when he was only seven years of age. He was then assigned a tutor who taught him basic skills for his trade including fletching, crafting and surviving in the wilderness. When the young hunter was seven, he was appointed to watch and learn from his master while taking care of tools and learning basic concepts. Hunting for the aristocracy was not viewed as a way to survive, but as pure entertainment and training. 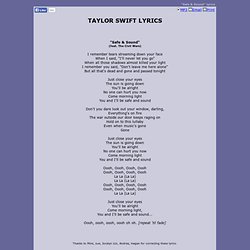 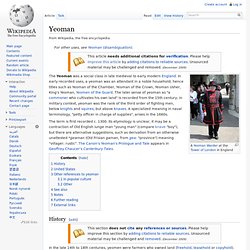 In early recorded uses, a yeoman was an attendant in a noble household; hence titles such as Yeoman of the Chamber, Yeoman of the Crown, Yeoman Usher, King's Yeoman, Yeomen of the Guard. The later sense of yeoman as "a commoner who cultivates his own land" is recorded from the 15th century; in military context, yeoman was the rank of the third order of fighting men, below knights and squires, but above knaves. A specialized meaning in naval terminology, "petty officer in charge of supplies", arises in the 1660s. History[edit] In the late 14th to 18th centuries, yeomen were farmers who owned land (freehold, leasehold or copyhold). Sir Anthony Richard Wagner, Garter Principal King of Arms, wrote that "a Yeoman would not normally have less than 100 acres" (40 hectares) "and in social status is one step down from the Landed Gentry, but above, say, a husbandman.