This is a collection of resources related to the study of the Industrial Revolution and also the related research assignments. 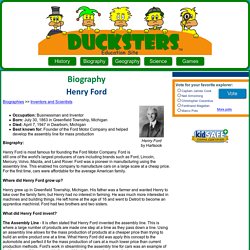 Ford is still one of the world's largest producers of cars including brands such as Ford, Lincoln, Mercury, Volvo, Mazda, and Land Rover. Ford was a pioneer in manufacturing using the assembly line. This enabled his company to manufacture cars on a large scale at a cheap price. Where did Henry Ford grow up? Henry grew up in Greenfield Township, Michigan. What did Henry Ford invent? The Assembly Line - It is often stated that Henry Ford invented the assembly line. 1908 Ford Model Tby Ford Motor Company. Biography: Robert Fulton for Kids. History >> Biography Robert FultonAuthor: Unknown Occupation: Engineer and Inventor Born: November 14, 1765 in Little Britain, Pennsylvania Died: February 24, 1815 in New York, New York Best known for: Built and ran the first successful commercial steamboat.Biography: Where was Robert Fulton born? 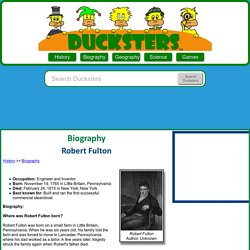 Robert Fulton was born on a small farm in Little Britain, Pennsylvania. When he was six years old, his family lost the farm and was forced to move to Lancaster, Pennsylvania where his dad worked as a tailor. As a boy, Robert loved to build things and experiment. Early Career After a few years working as an apprentice, Robert moved to Philadelphia to pursue a career as an artist. Going to Europe In 1786, Robert went to Europe to further his art career. The Submarine Fulton moved to Paris in 1797. In order to progress, Fulton needed money to build and test more submarines. The Steamboat Fulton's next idea was to build a boat that was powered by a steam engine. Biography: Eli Whitney. Biography >> Civil War >> Inventors Occupation: Inventor Born: December 8, 1765 in Westborough, Massachusetts Died: January 8, 1825 in New Haven, Connecticut Best known for: Inventing the cotton gin Eli Whitney by Charles Bird King Biography: Eli Whitney changed the course of history in the southern United States with the invention of the cotton gin. 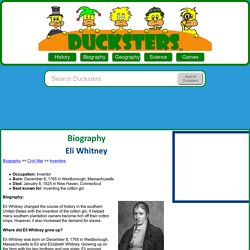 It helped many southern plantation owners become rich off their cotton crops. However, it also increased the demand for slaves. Where did Eli Whitney grow up? Eli Whitney was born on December 8, 1765 in Westborough, Massachusetts to Eli and Elizabeth Whitney. Young Eli was more interested in tools and machines than farming. History: Historical Figures. Biography.com. 10 Major Inventors of the Industrial Revolution. 27 Industrial Revolution Inventions that Changed the World. The Industrial Revolution was a period of rapid social and technological change that have shaped the world we live in today. 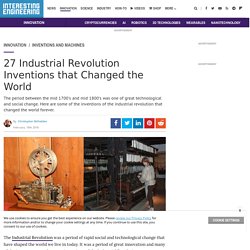 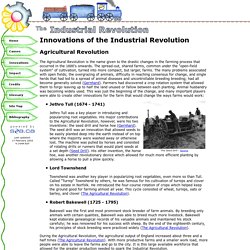 The spread-out, shared farms, common under the "open-field system" of cultivation, turned into more compact, but larger, farms. The many problems associated with open fields; the overgrazing of animals, difficulty in reaching consensus for change, and single herds that had led to a spread of animal diseases and uncontrollable breeding breeding; had all become generally solved (Gernhard). Farmers had discovered a crop rotation system that allowed them to forgo leaving up to half the land unused or fallow between each planting. Animal husbandry was becoming widely used. Jethro Tull (1674 - 1741) Jethro Tull was a key player in introducing and popularizing root vegetables. 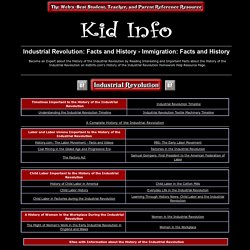 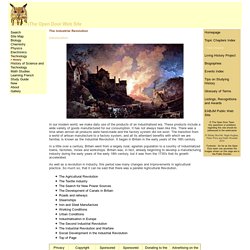 These products include a wide variety of goods manufactured for our consumption. It has not always been like this. There was a time when almost all products were hand-made and the factory system did not exist. In a little over a century, Britain went from a largely rural, agrarian population to a country of industrialized towns, factories, mines and workshops. As well as a revolution in industry, this period saw many changes and improvements in agricultural practice. History - British History in depth: Victorian Technology. The Industrial Revolution - Research - LibGuides at St. Peter Claver College.