Nationalism and the conflict in the Balkans

Gavrilo Princip: Biography, the Black Hand, WW1 & Quotes. The Black Hand Movement. The road to full Serbian independence had started many decades before. 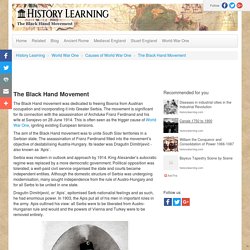 On 11 June 1903, Apis and a group of his junior officers assassinated the king of Serbia and his wife in the ‘May Coup’. Afterwards, Apis was hailed as "the saviour of the fatherland" and he was appointed Professor of Tactics at the Military Academy. The ‘Serbian Defence’ also sent trained volunteers to help Serbs in Old Serbia and Macedonia secure independence from Bulgaria.

In 1912 and 1913 they were successful and Old Serbia and Macedonia were returned to Serbia after the Bulgarians had been defeated. The Top 5 Causes That Led to World War I. Causes of the First World War. I am happy that you are using this web site and hope that you found it useful. 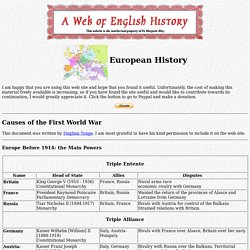 Unfortunately, the cost of making this material freely available is increasing, so if you have found the site useful and would like to contribute towards its continuation, I would greatly appreciate it. Click the button to go to Paypal and make a donation. This document was written by Stephen Tonge. I am most grateful to have his kind permission to include it on the web site. Europe Before 1914: the Main Powers.

The Bosnian Crisis. The Bosnian Crisis of 1908-09 was very much the precursor of the events in the Balkans that spilled over into the assassination of Franz Ferdinand at Sarajevo in June 1914. 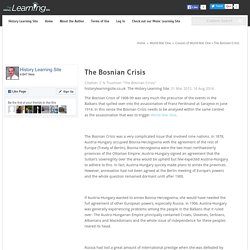 In this sense the Bosnian Crisis needs to be analysed within the same context as the assassination that was to trigger World War One. The Bosnian Crisis was a very complicated issue that involved nine nations. In 1878, Austria-Hungary occupied Bosnia-Herzegovina with the agreement of the rest of Europe (Treaty of Berlin). Bosnia-Herzegovina were the two most northwesterly provinces of the Ottoman Empire. Austria-Hungary signed an agreement that the Sultan’s sovereignty over the area would be upheld but few expected Austria-Hungary to adhere to this. World War Two timeline of events in 1914.

European history. Outbreak of World War I - World War I. Almost exactly a century before, a meeting of the European states at the Congress of Vienna had established an international order and balance of power that lasted for almost a century. 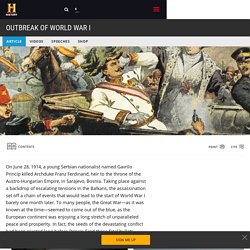 By 1914, however, a multitude of forces were threatening to tear it apart. The Balkan Peninsula, in southeastern Europe, was a particularly tumultuous region: Formerly under the control of the Ottoman Empire, its status was uncertain by the late 1800s, as the weakened Turks continued their slow withdrawal from Europe. Order in the region depended on the cooperation of two competing powers, Russia and Austria-Hungary. The slumping Austria-Hungary–in which small minorities (Germans in Austria, Magyars in Hungary) attempted to control large populations of restless Slavs–worried for its future as a great power, and in 1908 it annexed the twin Balkan provinces of Bosnia-Herzogovina. 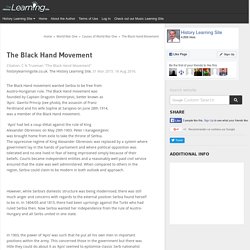 The Black Hand movement was founded by Captain Dragutin Dimitrijevic, better known as ‘Apis’. Gavrilo Princip (see photo), the assassin of Franz Ferdinand and his wife Sophie at Sarajevo on June 28th 1914, was a member of the Black Hand movement. ‘Apis’ had led a coup d’état against the rule of King Alexander Obrenovic on May 29th 1903. Peter I Karageorgevic was brought home from exile to take the throne of Serbia.