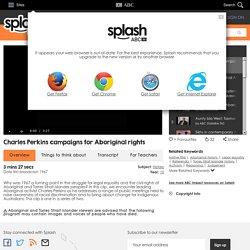 It's my pleasure, of course, to be here today to address you on a question that you all may be reasonably unaware of, you don't really know the full facts about. And I hope that I can, in this short space of 20-25 minutes or a little more, give you some idea on what are the problems involved as far as Aboriginal people are concerned here in Australia, and the possibilities of solutions to these problems.CHARLES PERKINSFirstly, the Aborigines are an Australoid people racially, of Australoid stock. They were supposed to have come from southern India about 20,000 years ago and inhabited this continent. 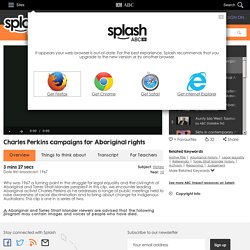 It's my pleasure, of course, to be here today to address you on a question that you all may be reasonably unaware of, you don't really know the full facts about. And I hope that I can, in this short space of 20-25 minutes or a little more, give you some idea on what are the problems involved as far as Aboriginal people are concerned here in Australia, and the possibilities of solutions to these problems.CHARLES PERKINSFirstly, the Aborigines are an Australoid people racially, of Australoid stock. They were supposed to have come from southern India about 20,000 years ago and inhabited this continent. Leading the Freedom Ride in 1965 - History (10) 00:00:00:00MICHAEL BRISSENDEN:Half a century ago a group of student activists confronted racism in regional New South Wales in what's become known as the Freedom Ride. 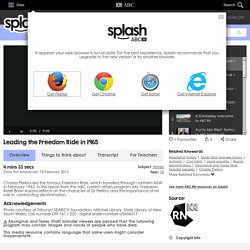 The University of Sydney students were led by the late Charles Perkins. Here he explains the motivation.00:00:12:14CHARLES PERKINS:The whole freedom ride is not so much for the white people. The Freedom Riders force us to face ourselves - History (10) Transcript 00:00:00:00On-screen text reads, ' Viewer Advice - This media resource contains content that may be considered inappropriate for younger children.'00:00:07:01On-screen text reads, 'Viewer Advice - This media resource contains language that some viewers might consider inappropriate.'00:00:13:19On-screen text reads, 'Viewer Advice - Aboriginal and Torres Strait Islander viewers are advised that the following media resource may contain images and voices of people who have died.'00:00:23:13Steve Cannane speaks to the camera from behind a desk in a studio.00:00:23:13STEVE CANNANE:50 years ago, a group of university students from Sydney boarded a bus and set out to expose the racism and segregation that existed in country towns across New South Wales. 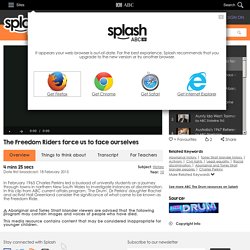 The journey, led by the late Charles Perkins, became known as the Freedom Ride, and sparked a debate in Australia about Indigenous rights. Lech Walesa Facts. Lech Walesa (born 1943), charismatic leader of Solidarity, the independent trade union movement in Poland, was awarded the 1983 Nobel Peace Prize for his valiant struggle to secure workers' rights through negotiation and peaceful means. 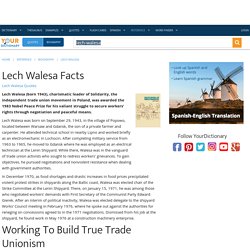 Lech Walesa was born on September 29, 1943, in the village of Popowo, located between Warsaw and Gdansk, the son of a private farmer and carpenter. He attended technical school in nearby Lipno and worked briefly as an electromechanic in Lochocin. After completing military service from 1963 to 1965, he moved to Gdansk where he was employed as an electrical technician at the Lenin Shipyard. While there, Walesa was in the vanguard of trade union activists who sought to redress workers' grievances. To gain objectives, he pursued negotiations and nonviolent resistance when dealing with government authorities. Working To Build True Trade Unionism strikes. The Founding of "Solidarity" During 1981 Walesa was frequently called upon to defuse wildcat strikes.

Collaborating for Indigenous Rights 1957-1973. (1936 to 2000) Source: Smoke Signals, April 1966 Charles Perkins was born in Alice Springs; his mother was Arrente and his father Kalkadoon. 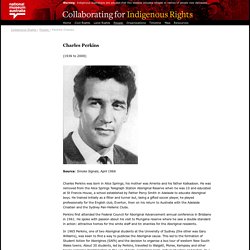 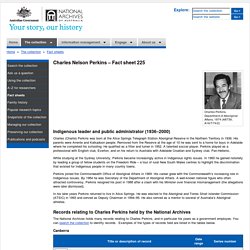 His parents were Arrente and Kalkadoon people. Removed from the Reserve at the age of 10 he was sent to a home for boys in Adelaide where he completed his schooling. He qualified as a fitter and turner in 1952. American singer and political activist. Joan Baez: Singer, activist, peacenik, lover, legend. Angry wasps are swarming in the eaves of Joan Baez’s Californian home, but otherwise all is as it should be in the life of a woman who has devoted herself to the cause of peace. 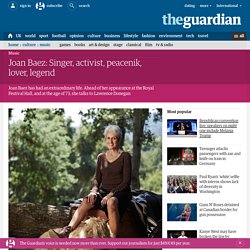 The breeze is warm, the incense sticks are billowing out smoke and the conversation is mellow. “Clear,” Baez says when asked to describe her current state of mind. Her eyes glow with the light of a teenager. “Very clear.” Ask a silly question. For more than 50 years, Baez has been a central figure in the cultural and political life of the United States. “I didn’t know him until we ended up doing a show together in Prague. Joan Baez - Environmental Activist, Children's Activist, Civil Rights Activist, Women's Rights Activist, Guitarist, Anti-War Activist, Singer.

Environmental Activist, Children's Activist, Civil Rights Activist, Women's Rights Activist, Guitarist, Anti-War Activist, Singer (1941–) Joan Baez is an American folk singer, songwriter and activist who is best known for her distinctive voice and for her role in popularizing the music of Bob Dylan. 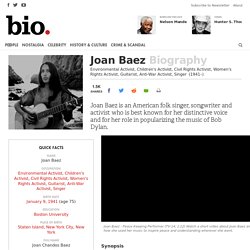 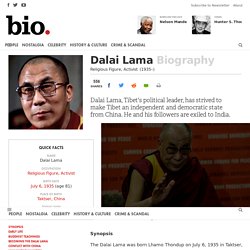 He and his followers are exiled to India. Synopsis The Dalai Lama was born Lhamo Thondup on July 6, 1935 in Taktser, China. At age 15, he assumed political power of Tibet as the Dalai Lama. The People's Republic of China invaded that same year. Brief Biography. His Holiness the 14th Dalai Lama, Tenzin Gyatso, describes himself as a simple Buddhist monk. He is the spiritual leader of Tibet. He was born on 6 July 1935, to a farming family, in a small hamlet located in Taktser, Amdo, northeastern Tibet.

At the very young age of two, the child who was named Lhamo Dhondup at that time, was recognized as the reincarnation of the previous 13th Dalai Lama, Thubten Gyatso. Malala Yousafzai - Children's Activist, Women's Rights Activist. As a young girl, Malala Yousafzai defied the Taliban in Pakistan and demanded that girls be allowed to receive an education. She was shot in the head by a Taliban gunman in 2012, but survived and went on to receive the Nobel Peace Prize. Synopsis. Profile: Malala Yousafzai. Image copyright Reuters Pakistani schoolgirl Malala Yousafzai wrote an anonymous diary about life under Taliban rule in north-west Pakistan.

She was shot in the head by militants for daring to go to school. In 2014 she became the youngest person ever to win the Nobel Peace Prize. Accepting the award in Oslo she said she was "humbled" and proud to be the first Pashtun and the first Pakistani to win the prize. She also joked that she was probably the first winner who still fought with her younger brothers.

José Ramos-Horta hero file. First published 16 December 2000. Reviewed 17 January 2007. Right Livelihood Award: Laureates Detail. Asma Jahangir’s early life Asma Jahangir was born on 27 January 1952, and earned a B.A. from Kinnaird College, Lahore, followed by a law degree in 1978 from Punjab University. Born into a politically active family, her activism began at a young age when she protested against the military government for detaining her father for opposing dictatorship. Campaigning against discriminatory laws and defending the disadvantaged In 1980, Jahangir and 3 of her fellow women lawyers got together to form AGHS Law Associates, the first law firm established by women in Pakistan. In 1981, Jahangir supported the Women’s Action Forum (WAF), a group that began campaigning against Pakistani laws that discriminated against women, most notably against the proposed Law of Evidence, where the value of a woman’s testimony would be reduced to half that of a man’s testimony, and the Hudood Ordinances, where victims of rape had to prove their innocence or else face punishment themselves.

The Sweden-based award "honors courageous and effective work for human rights, freedom of the press, civil liberties and combating climate change," according to a statement released by the Right Livelihood Award committee on Wednesday, September 24. Created in 1980, the annual award acknowledges efforts that its founder Jacob von Uexkull felt were being ignored by the Nobel Prizes. 62-year-old Jahangir is Pakistan's leading human rights activist and a former president of the South Asian nation's Supreme Court Bar Association. 'It is a tribute to a large number of Pakistanis who have worked relentlessly for better human rights,' says Jahangir. Nelson Mandela & the Fight Against Apartheid. To the Teacher: Nelson Mandela's death on December 5, 2013, is being marked by people around the world. African Success : Biography of Nelson MANDELA. iWonder - Nelson Mandela: The last great liberator? Eleanor Roosevelt.