The Home Front... How war impacts on everyone 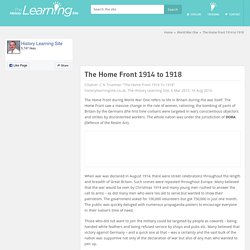 The Home Front saw a massive change in the role of women, rationing, the bombing of parts of Britain by the Germans (the first time civilians were targeted in war), conscientious objectors and strikes by discontented workers. The whole nation was under the jurisdiction of DORA (Defence of the Realm Act). The homefront. Australia’s agricultural supply was vital to Britain’s war effort. 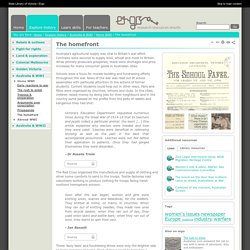 Contracts were secured to supply wool, wheat and meat to Britain. While primary producers prospered; there were shortages and price increases for many consumer goods in Australian cities. World War One Zeppelin Raids. Before the outbreak of World War One, airships were the height of luxury travel. 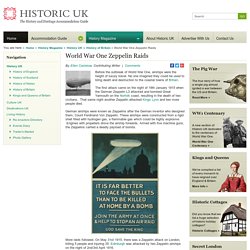 No one imagined they could be used to bring death and destruction to the coastal towns of Britain. The first attack came on the night of 19th January 1915 when the German Zeppelin L3 attacked and bombed Great Yarmouth on the Norfolk coast, resulting in the death of two civilians. That same night another Zeppelin attacked Kings Lynn and two more people died. German airships were known as Zeppelins after the German inventor who designed them, Count Ferdinand Von Zeppelin.

These airships were constructed from a rigid shell filled with hydrogen gas, a flammable gas which could be highly explosive. World War One - Agriculture and Industry. The First World War was a total war, in that those on the Home Front were not isolated from the fighting on the battlefields, but instead were as crucial to victory or defeat as the soldiers in the army, the aviators or the sailors in the navy. 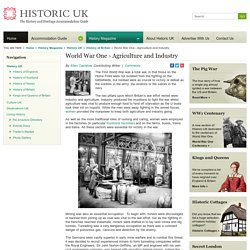 The two pillars upon which Britain’s war effort rested were industry and agriculture. Industry produced the munitions to fight the war whilst agriculture was vital to produce enough food to fend off starvation as the U boats took their toll on imports. GCSE Bitesize - The Home Front during the First World War. History - The Home Front in World War One. History: Home Front: World War One. The Home Front - History (9) Homefront - World War I and Australia - Research guides at State Library of New South Wales. While the men were fighting overseas women were expected to keep things going at home. 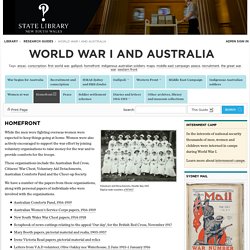 Women were also actively encouraged to support the war effort by joining voluntary organisations to raise money for the war and to provide comforts for the troops. These organisations include the Australian Red Cross, Citizens' War Chest, Voluntary Aid Detachments, Australian Comforts Fund and the Cheer-up Society. Civilians.