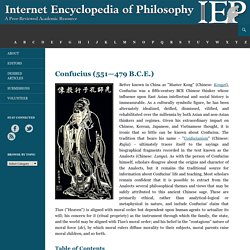 As a culturally symbolic figure, he has been alternately idealized, deified, dismissed, vilified, and rehabilitated over the millennia by both Asian and non-Asian thinkers and regimes. Given his extraordinary impact on Chinese, Korean, Japanese, and Vietnamese thought, it is ironic that so little can be known about Confucius. The tradition that bears his name - "Confucianism" (Chinese: Rujia) - ultimately traces itself to the sayings and biographical fragments recorded in the text known as the Analects (Chinese: Lunyu). As with the person of Confucius himself, scholars disagree about the origins and character of the Analects, but it remains the traditional source for information about Confucius' life and teaching.

Table of Contents 1. Thus, a new role for shi as itinerant antiquarians emerged. CONFUCIANISM. Religions of the world: Sponsored link. 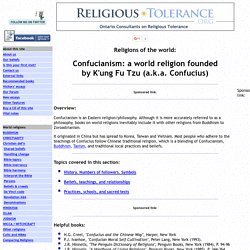 Overview: Confucianism is an Eastern religion/philosophy. Although it is more accurately referred to as a philosophy, books on world religions inevitably include it with other religions from Buddhism to Zoroastrianism. It originated in China but has spread to Korea, Taiwan and Vietnam. Topics covered in this section: Sponsored link: Helpful books: You can safely buy these books on Confucianism from Amazon.com: If you see a generic Amazon.com ad here, please click on your browser's refresh key. Site navigation: Copyright © 1995 to 2009 by Ontario Consultants on Religious Tolerance. 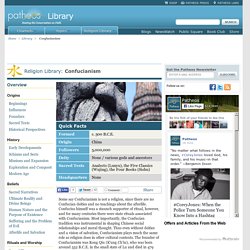 Confucius himself was a staunch supporter of ritual, however, and for many centuries there were state rituals associated with Confucianism. Most importantly, the Confucian tradition was instrumental in shaping Chinese social relationships and moral thought. Thus even without deities and a vision of salvation, Confucianism plays much the same role as religion does in other cultural contexts. The founder of Confucianism was Kong Qiu (K'ung Ch'iu), who was born around 552 B.C.E. in the small state of Lu and died in 479 B.C.E. The Latinized name Confucius, based on the honorific title Kong Fuzi (K'ung Fu-tzu), was created by 16th-century Jesuit missionaries in China. Confucian Documents. Sacred-texts home Taoism Buddhism I Ching Journal Articles: Chinese Religion OCRT: ConfucianismBuy CD-ROM Buy books about Confucianism These are key texts of Confucianism, the traditional state religion of feudal China. 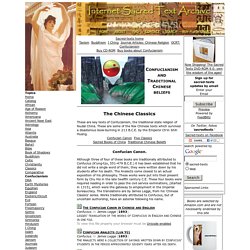 These are some of the few Chinese texts which survived a disasterous book-burning in 213 B.C.E. by the Emperor Ch'in Shih Huang. Confucian Canon Five ClassicsSacred Books of China Traditional Chinese Beliefs Confucian Canon. Although three of four of these books are traditionally attributed to Confucius (K'ung-tzu, 551-479 B.C.E.) it has been established that he did not write a single word of them; they were written down by his students after his death.

The Confucian Canon in Chinese and EnglishConfucius, tr. Confucian Analects (Lun Yü)Confucius, tr. MenciusMencius, tr. The Great Learning (Ta Hsüeh)Confucius*, tr. The Doctrine Of The Mean (Chung Yung)Confucius*, tr. The Sacred Books of China Additional translations The Book of Odes by L. The Five Classics The Li Ki Part I. ARC - Faiths and ecology - What does Confucianism teach about ecology? In July 2013 Confucianism joined ARC as our 12th member in partnership with us on issues of faith and conservation. 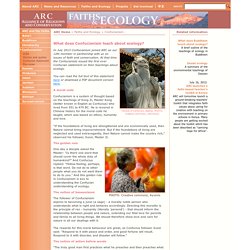 At that time the Confucianists issued the first ever Confucian statement on their teachings about ecology. You can read the full text of this statement here or download a PDF document version here. A moral code Confucianism is a system of thought based on the teachings of Kong Zi, Master Kong (better known in English as Confucius) who lived from 551 to 479 BC. He is revered in Chinese history for the moral code he taught, which was based on ethics, humanity and love. "If the foundations of living are strengthened and are economically used, then Nature cannot bring impoverishment. The golden rule One day a disciple asked the Master: "Is there one word that should cover the whole duty of humankind? " The notion of benevolence The follower of Confucianism aspires to becoming a junzi (a sage) - a morally noble person who understands what is right and behaves accordingly.