Nilofer Merchant: Got a meeting? Take a walk. David Grady: Comment sauver le monde (ou du moins vous-même) des mauvaises réunions. Do you run meetings or lead them? Why do some online meetings get the job done, while others don't? 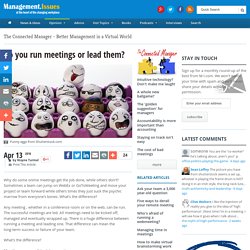 Sometimes a team can jump on WebEx or GoToMeeting and move your project or team forward while others times they just suck the psychic marrow from everyone's bones. What's the difference? Any meeting , whether in a conference room or on the web, can be run. The successful meetings are led. All meetings need to be kicked off, managed and eventually wrapped up. What's the difference? Meeting runners: Schedule a meeting. Meeting leaders: Schedule the meeting in a way that helps people come prepared and focused. Meeting runners: Kick off the meeting and run through the agenda in order, often getting the little administrative stuff out of the way first. All the Charts, Tables, and Checklists You Need to Conduct Better Meetings. The ripple effects of too many meetings can be astonishing. 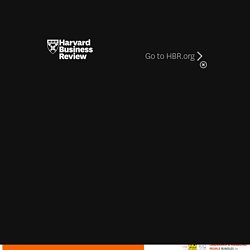 A Checklist for Planning Your Next Big Meeting. In theory, everyone understands that preparation can make or break an important meeting. The more work you do before you walk into the room, the more productive and efficient you’ll be. But who has the time to properly prepare? Our checklist makes meeting prep quick and easy—be sure to print it out or save it for later. Each step is described in more detail below. Using the checklist and the principles behind it will ensure that you’ve covered all your bases—and that you won’t be wasting anyone’s time (including your own). Identify the purpose of the meeting. Do You Really Need to Hold That Meeting?

“Let’s schedule a meeting” has become the universal default response to most business issues. 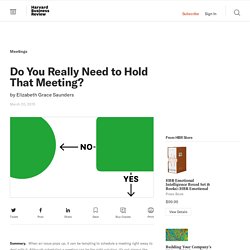 9 Science-Backed Methods for a Happier, More Productive Meeting. If you have ever wanted to pop an escape hatch or teleport to distant worlds just to get out of a meeting, take heart. 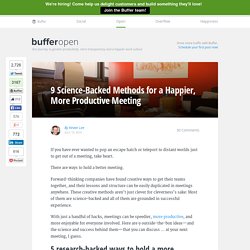 There are ways to hold a better meeting. Forward-thinking companies have found creative ways to get their teams together, and their lessons and structure can be easily duplicated in meetings anywhere. These creative methods aren’t just clever for cleverness’s sake: Most of them are science-backed and all of them are grounded in successful experience. With just a handful of hacks, meetings can be speedier, more productive, and more enjoyable for everyone involved. Here are 9 outside-the-box ideas—and the science and success behind them—that you can discuss … at your next meeting, I guess. The Right Way to End a Meeting. A common complaint among managers is that the conversations they have with employees aren’t producing results: “We keep talking about the same issue over and over, but nothing seems to ever happen!” 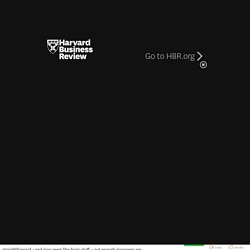 That’s because most managers are missing a vital skill: the ability to deliberately close a conversation. If you end a conversation well, it will improve each and every interaction you have, ultimately creating impact. Meetings are really just a series of conversations — an opportunity to clarify issues, set direction, sharpen focus, and move objectives forward. To maximize their impact, you need to actively design the conversation. While the overall approach is straightforward – and may seem like basic stuff — not enough managers are actually doing this in practice: Set up each conversation so everyone knows the intended outcomes and how to participate.

I recently worked with a university president who requested that I come in to help with some leadership training. Productivity Hacks: I Want My Employees to Stand Around. 10 Etiquette Rules For Meetings That Every Professional Needs To Know. Mike Nudelman / Business Insider Even if you dread them, meetings put you in front of coworkers and bosses who you may not work with on a regular basis. 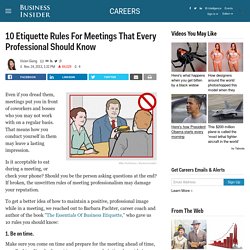 Do You Need That Meeting? I’m sitting in Kevin Hoffman‘s session at UI18 on Running Better Meetings. 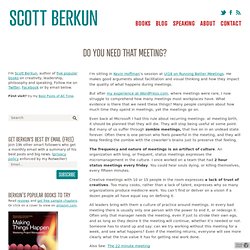 He makes good arguments about facilitation and visual thinking and how they impact the quality of what happens during meetings. But after my experience at WordPress.com, where meetings were rare, I now struggle to comprehend how many meetings most workplaces have. What evidence is there that we need these things? Many people complain about how much time they spend in meetings, yet the meetings go on.

Even back at Microsoft I had this rule about recurring meetings: at meeting birth, it should be planned that they will die. The frequency and nature of meetings is an artifact of culture. Creative meetings with 10 or 15 people in the room expresses a lack of trust of creatives. Meetings Are Toxic. Do you really need a meeting? 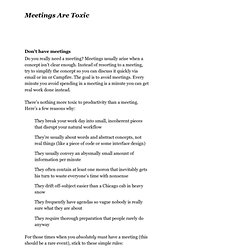 Meetings usually arise when a concept isn't clear enough. Instead of resorting to a meeting, try to simplify the concept so you can discuss it quickly via email or im or Campfire. The goal is to avoid meetings. Every minute you avoid spending in a meeting is a minute you can get real work done instead. There's nothing more toxic to productivity than a meeting. They break your work day into small, incoherent pieces that disrupt your natural workflow They're usually about words and abstract concepts, not real things (like a piece of code or some interface design) They usually convey an abysmally small amount of information per minute They often contain at least one moron that inevitably gets his turn to waste everyone's time with nonsense They drift off-subject easier than a Chicago cab in heavy snow They frequently have agendas so vague nobody is really sure what they are about They require thorough preparation that people rarely do anyway Break it Down.