New App Wants Women To Be Fearless, Designs Distress Signal To Help With Violence - B&T. A new iPhone and Apple Watch app called Fearless has been created to address the issue of violence against women. 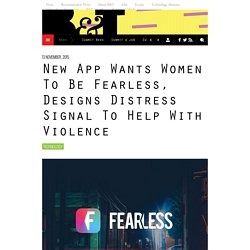 The app enables women and other users to send a distress signal and broadcast their GPS location to trusted contacts. Eliminate Violence Against Women and Girls? There’s An App for That. New Media can be Harnessed to Help Prevent Violence Against Women Today is International Women’s Day, which falls during the 57th annual week-long session of the Commission on the Status of Women, or CSW, that is currently taking place at the U.N. headquarters in New York. 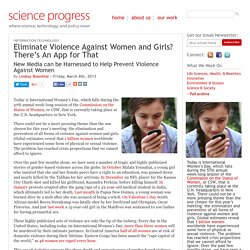 There could not be a more pressing theme than the one chosen for this year’s meeting: the elimination and prevention of all forms of violence against women and girls. Global estimates reveal that 1 billion women worldwide have experienced some form of physical or sexual violence. The problem has reached crisis proportions that we cannot afford to ignore. Over the past few months alone, we have seen a number of tragic and highly publicized stories of gender-based violence across the globe. Kitestring. The smartphone app that can save us... from an emergency! Girls, which one of us has never had to, at least once in the past, spend ages looking for toilets for a wee break whilst shopping, walking or visiting somewhere ? 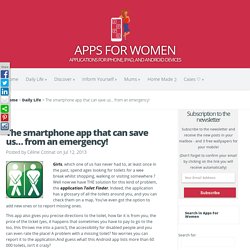 Well now we have THE solution for this kind of problem, the application Toilet Finder. Indeed, the application has a glossary of all the toilets around you, and you can check them on a map. You’ve even got the option to add new ones or to report missing ones. This app also gives you precise directions to the toilet, how far it is from you, the price of the ticket (yes, it happens that sometimes you have to pay to go to the loo, this throws me into a panic!) , the accessibility for disabled people and you can even rate the place! This app, which might appear to some of you as useless and futile, is, I swear, very handy and can save you from very uncomfortable and urgent situations.

Price:Free Platform:iPhone,iPad,iPod touch,Android device Available for iOS 4.3 + on the Apple Store, and for Android 1.6 on Google Play. Best 10 Personal Safety Apps For Women [Android] The #yesallwomen campaign that took off on twitter recently was an important reminder about how women are, still in this day and age, being subjected to violence, domestic abuse and rape. 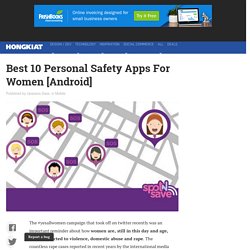 The countless rape cases reported in recent years by the international media and the reactions of politicians, police authorities, victims, offenders, as well as the people who read these stories speak volumes about where we stand in the issue of personal safety for women. Uber expands SafetiPin partnership. Uber launches new safety feature on app. SOS - Stay Safe! Your Phone as a Personal Safety Device - Android Application. Jan 30, 2015 ‘Phones Offer Touch of Safety’. 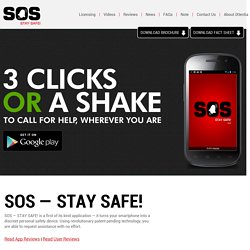 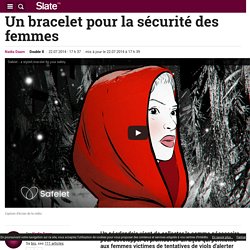 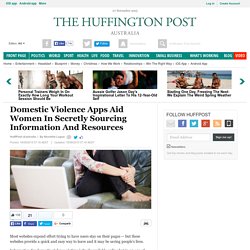 Information for domestic violence victims is freely available online but in an age of increasing surveillance, users are urged to take advantage of “quick exit” facilities to ensure their research remains private should their abuser walk in on them. One in five women in Australia have experienced physical or sexual abuse at the hands of an intimate partner, according to the Australian Bureau of Statistics. One woman is killed each week by her current or ex-husband, partner, or boyfriend.

The 1800RESPECT website, funded by the Australian Government and operated by Medibank, advises victims of abuse how to mask their research online, which otherwise may tip off an abusive partner to efforts to seek help or leave a relationship. Mobile apps for women's safety in Indian metros. Cambodia activists pin hopes on apps to turn tide of violence against women. In Phnom Penh’s bustling cafes, hip-looking young people hunch over their mobile devices. 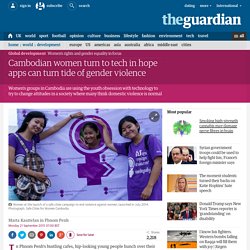 According to Dany Sun, a women’s rights activist likewise armed with a smartphone, this relatively new trend is representative of modern Cambodia. But the technological progress, Sun observes, has not been accompanied by advances on gender equality. Traditional attitudes and cultural norms, which portray women as subservient and inferior to men, continue to underlie the country’s harrowing statistics on violence against women. “Since the day we are born, we are less valued than men. An app that fights domestic violence in Turkey. © Time Inc. 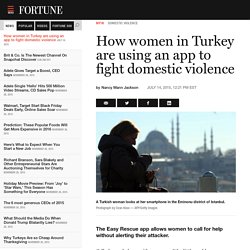 All rights reserved. Fortune.com is a part of the Time.com network of sites. Powered by WordPress.com VIP Email address or Password is incorrect Forgot Password? Want the Full Story? Privacy Policy Thank you for your interest in licensing Fortune content. 1. 15 personal safety apps for women- The Times of India. App-Elles. This incredibly smart domestic violence app could save women’s lives. The Aspire News app looks like any other iPhone or Android news aggregator, but it’s actually a potentially lifesaving domestic violence alert system. 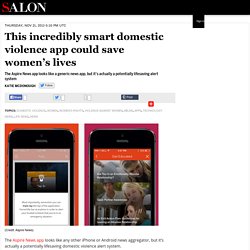 While the front page functions like a regular news app, when you go to the “Help” section of the page it provides a list of local domestic violence resources and a “Go Button,” that, once pressed, alerts the user’s chosen contacts, local authorities and service providers about the violent or potentially violent situation. From the creators: If someone you know is in an abusive relationship — or if that someone is you — the Help Section of the application contains complete resources for victims of domestic violence, as well as a way to get help when you need it. This app does not serve as a replacement for emergency services — in any situation where you feel that you may be at risk, please dial 911 or your local emergency number.

It’s a simple idea, but a potentially lifesaving one. H/t A Look into the Mind of Mia via Jezebel. Women's safety app 'Mo Sathi' launched in Odisha. Bhubaneswar: Odisha Chief Minister Naveen Patnaik on Friday launched 'Mo Sathi', a women's safety app for the women in Odisha's twin cities of Bhubaneswar and Cuttack. "I am happy to dedicate this application to women of the twin cities and urge all the women to make use of this technology to enhance their own security," he said after launching the app here.

While the state government has already taken several steps to ensure safety of women by setting up 'Mahila and Sishu Desk' in all police stations in the state, the commisionrate of police of Bhubaneswar and Cuttack have also launched Pink Auto Service exclusively for women. "Our government is dedicated to taking various steps towards improving the living and working conditions of women and ensuring that their dignity, respect and honour is maintained," said the chief minister. The Chief Minister also called upon the police to investigate all crimes related to women with singular sincerity and professionalism. Resonantes. Viols : ce sont des pénétrations sexuelles non voulues qu’on te fait subir ou que l’on tente de te faire subir avec violence, menace, contrainte ou surprise.