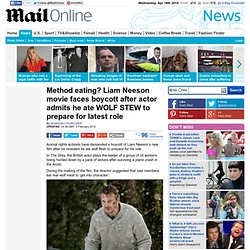 Cast of 'The Grey' dined on wolf meat during production. Method motivates Liam Neeson, 'The Grey' cast to dine on wolf meatProduction of the Hollywood action flick The Grey was a shot in the arm for the northern B.C. town of Smithers this time last year, as star Liam Neeson, director Joe Carnahan and company filmed in the mountains above and around a local ski resort. 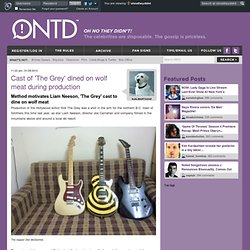 The trapper Dick McDiarrmid. The movie, which opens next Friday, kept the town buzzing with its needs for gear, transportation, hotels, food and supplies. Dermot Mulroney on Jimmy Kimmel Live PART 2. Wolf Conservation Center Prepares for “The Grey” Wolves, their recovery, and the status of the keystone predator are often hot topics on Capitol Hill and media outlets in the West. 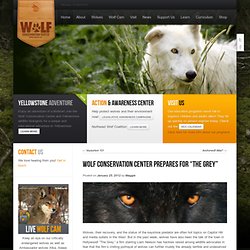 But in the past week, wolves have also been the talk of the town in Hollywood! “The Grey,” a film starring Liam Neeson has hackles raised among wildlife advocates in fear that the film’s chilling portrayal of wolves can further muddy the already terrible and undeserved reputation that this species is burdened with. The film, opening on January 27th, is an intense adventure thriller about a group of oil rig workers who must fight wolves for their lives in the Alaskan wilderness after their airplane crashes. In reality, wild wolves are shy and elusive. A person in wolf country has a greater chance of being hit by lightning, dying of a bee sting or being killed in a vehicle collision with a deer than being injured by a wolf. WCC's Lewis on NPR (Photo: Chion Wolf) WCC's Darling on NPR (Photo: Chion Wolf) 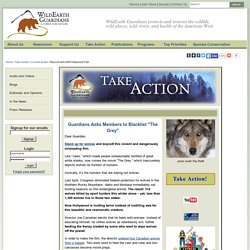 Like “Jaws,” which made people unreasonably terrified of great white sharks, now comes the movie “The Grey,” which inaccurately depicts wolves as hunters of humans. Dog Actors. I promised myself that I would give this movie as little free publicity as possible and not promote it or do an article about this movie on DogActors.com but recent events, findings, and several emails on the subject have forced me to write this article. 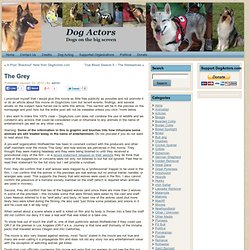 This section will be in the preview on the homepage and post lists but the entire post will not be viewable unless you click “more below. I also want to make this 100% clear – DogActors.com does not condone the use of wildlife and we condemn any actions that could be considered cruel or inhumane to any animals in the name of entertainment (as well as any other case). Broadcast Yourself. ‘The Grey’ Plays Up Misconceptions against Wolves. In “War Horse,” director Steven Spielberg treated his audience to a compelling case of historical fiction, grounding his World War I saga of a boy and his horse on a set of common facts―including that the Germans and the United Kingdom were combatants and horses had a major role in the conflict. 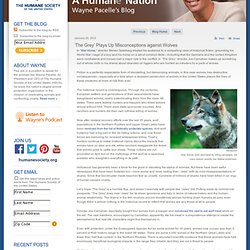 In “The Grey,” director Joe Carnahan makes up something out of whole cloth in his drama about stranded oil riggers who are hunted as intruders by a pack of wolves. Fiction is a perfectly respectable form of storytelling, but demonizing animals, in this case wolves, has destructive consequences―especially at a time when a renewed persecution of wolves in the United States places the lives of these creatures at more at risk than ever. iStockphotoGray wolves were decimated by killing campaigns, yet many wolves recently lost federal protections.

Would Real Wolves Act Like the Wolves of ‘The Grey’? The nominal star of The Grey, America’s top-grossing film, is Liam Neeson. 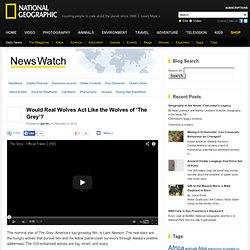 The real stars are the hungry wolves that pursue him and his fellow plane-crash survivors through Alaska’s pristine wilderness. The CGI-enhanced wolves are big, smart, and scary. But is their behavior based in reality? To parse wolf fact from fiction, we caught up with Daniel MacNulty, a wildlife-ecology professor at Utah State University whose research on Arctic wolves is funded in part by the National Geographic Society. First off, would wolves see men as prey and stalk them in the wild? One of the characters in the movie says these wolves a) have a 300-mile hunting radius, b) will attack anything that comes near their den, and c) “are the only animal that will seek revenge.”

Would a wolf attack a man standing next to a fire, with other men nearby, as happens in The Grey? North Kingstown man, Wolfwatcher Coalition protest film 'The Grey' WildEarth Guardians: Survey - Boycott Director Joe Carnahan's Anti-Wolf Film. Eating Wolves is Badass? I recently mentioned Liam Neeson’s new movie, The Grey, in a previous blog post. 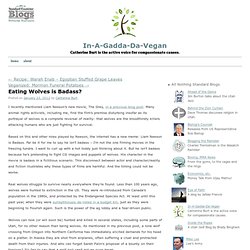 Many animal rights activists, including me, find the film’s premise disturbing insofar as its portrayal of wolves is a complete reversal of reality: that wolves are the bloodthirsty killers attacking humans who are just fighting for survival. Based on this and other roles played by Neeson, the internet has a new meme: Liam Neeson is Badass. Far be it for me to say he isn’t badass – I’m not the one filming movies in the freezing tundra. I want to curl up with a hot toddy just thinking about it. But he isn’t badass because he’s pretending to fight CG images and puppets of wolves.

Real wolves struggle to survive nearly everywhere they’re found. Wolves can now (or will soon be) hunted and killed in several states, including some parts of Utah, for no other reason than being wolves. ‘The Grey’: Hollywood’s Big Bad Wolf Slammed by Animal-Rights Groups. The comedian and filmmaker has been the smartest and funniest person in the room since he was in high school (maybe even earlier). 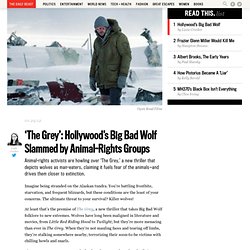 Here he's profiled just after making his first film. Albert Brooks’ second album, A Star is Bought, is the best comedy record most of you have probably never heart. It was never released on CD and it’s not available on ITunes. 'The Grey' Film Featuring Killer Wolves Draws Big Hollywood Interest. Remember that Liam Neeson vehicle we talked about in January called “The Grey”? 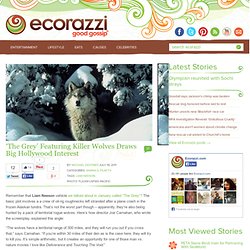 The basic plot involves a a crew of oil-rig roughnecks left stranded after a plane crash in the frozen Alaskan tundra. That’s not the worst part though – apparently, they’re also being hunted by a pack of territorial rogue wolves. Here’s how director Joe Carnahan, who wrote the screenplay, explained this angle: “The wolves have a territorial range of 300 miles, and they will run you out if you cross that,” says Carnahan. “If you’re within 30 miles of their den as is the case here, they will try to kill you. As mentioned earlier, if that sounds like bullshit, it’s because it is. “I’ve lived in Alaska over 40 years now and have encountered wolves in the wild well within a 100 yards of their den, if not closer,” he said. Liam Neeson and 'The Grey' Cast Ate Wolf Meat.

'The Grey' Director Downplays Wolf Controversy. Method acting. Method acting has been described as having "revolutionized American theater". While classical acting instruction "had focused on developing external talents", the Method was "the first systematized training that also developed internal abilities (sensory, psychological, emotional)".[1] Origins[edit] It was derived from the "system" created by Constantin Stanislavski, who pioneered similar ideas in his quest for "theatrical truth". This was done through his friendships with Russia's leading actors, his collaborations with playwright Anton Chekhov, and his own teaching, writing, and acting at the Moscow Art Theatre (founded in 1897).

Photograph by: Submitted, PNG Archive Production of the Hollywood action flick The Grey was a shot in the arm for the northern B.C. town of Smithers this time last year, as star Liam Neeson, director Joe Carnahan and company filmed in the mountains above and around a local ski resort. The movie, which opens next Friday, kept the town buzzing with its needs for gear, transportation, hotels, food and supplies. ‘The Grey’ Director Talks Characters, Locations And Protesters. The Grey. "The Grey" is an unrelenting demonstration that wolves have no opinion. When they attack, it's not personal. They've spent untold millennia learning how to survive, naked and without weapons, in fearsome places like the Arctic Circle in the dead of winter. They aren't precisely unarmed; they have their teeth and claws, but how far would that get us, even if we had rifles?

Boycott "The Grey" For Its Harmful Depictions of Wolves. Timothy Spanfelner, FL 4 years ago susan steinbach, FL theresa allen, CO Inês Guerra, Portugal Valdelina Gomes, Brazil Ivanna Ojeda, CA Sally Palmer, FL Lindy Katz, QC Wolves were here long befor Cattle It's man that moved in on them Not the other way around. Why I’m Boycotting “The Grey” and Why You Should Too… The upcoming release of Liam Neeson’s new film “The Grey” has many wolf conservationists, animal rights groups and thousands of concerned citizens like myself quite concerned about this movie and what it might do to wolf recovery efforts and the fate of wolves like OR-7 – the first wild wolf to re-enter California in over 90 years.

Why? The movie grossly mischaracterizes wolves as blood thirsty, territorial hunters of humans and the plot makes it look as if the humans are being hunted and pursued by killer wolves as they desperately fight for their survival. Nothing could be further from the truth. WildEarth Guardians: Survey - Boycott Director Joe Carnahan's Anti-Wolf Film. Conservationists In Westchester Are Upset Over The Depiction Of Wolves In Liam Neeson's New Movie 'The Grey' From our newsroom to your inbox weekday mornings at 9AM. Thank You for E-Mailing PETA! PETA is dead-on about "The Grey" For once, and I hope only once, I agree (partially) with the radical animal rights organization PETA. Does PETA have a legitimate gripe? Wildlife Groups Boycott "The Grey" Joe Carnahan. Endangered animal lover-for lunch. And for lies. - Fight a Mountain Ox. Animals in leg hold traps.

» Amputation in the wild: Of Wolf and Man GetDefault. Dear @CarnoJoe — A Parting Shot for Joe Carnahan. Dear Joe Carnahan,