Pearls? Publications. Other Wikileaks Pearltrees and Posts. Other Languages. Wikileaks. During the 2016 US presidential election campaign, WikiLeaks released emails and other documents from the Democratic National Committee and from Hillary Clinton's campaign manager, John Podesta.[14] These releases caused significant harm to the Clinton campaign,[citation needed] and have been attributed as potential contributing factors to her loss.[15] The U.S. intelligence community expressed "high confidence" that the leaked emails had been hacked by Russia and supplied to WikiLeaks, while WikiLeaks denied their source was Russia or any other state.[16] During the campaign, WikiLeaks promoted conspiracy theories about Hillary Clinton and the Democratic Party.[17][18][19] In private conversations from November 2015 that were later leaked, Julian Assange expressed a preference for a GOP victory in the 2016 election, explaining that "Dems+Media+liberals woudl [sic] then form a block to reign [sic] in their worst qualities. 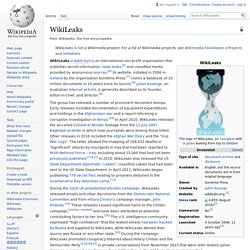 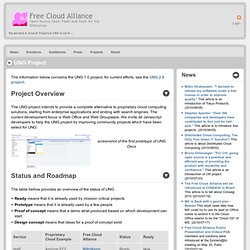 The UNG project intends to provide a complete alternative to proprietary cloud computing solutions, starting from enterprise applications and ending with search engines. The current development focus is Web Office and Web Groupware. We invite all Javascript developers to help the UNG project by improving community projects which have been select for UNG. screenshot of the first prototype of UNG Docs The table bellow provides an overview of the status of UNG. Symboldictionary.net. List of symbols. This is a list of graphical signs, icons, and symbols. 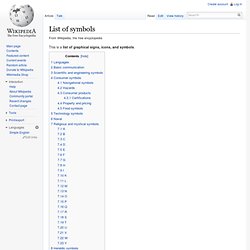 Languages[edit] Many (but not all) graphemes that are part of a writing system that encodes a full spoken language are included in the Unicode standard, which also includes graphical symbols. See: The remainder of this list focuses on graphemes not part of spoken language-encoding systems. Basic communication[edit] Scientific and engineering symbols[edit] Consumer symbols[edit] Various currency signs (sublist) [edit]