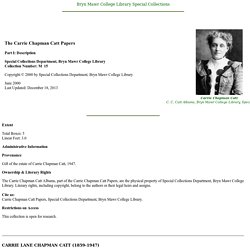 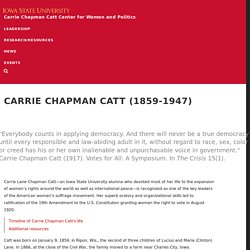 And there will never be a true democracy until every responsible and law-abiding adult in it, without regard to race, sex, color or creed has his or her own inalienable and unpurchasable voice in government. " Carrie Chapman Catt (1917). Carrie Chapman Catt - Address to Congress on Women's Suffrage. Click for pdf click for flash Woman suffrage is inevitable. 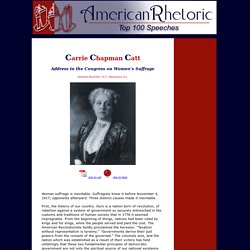 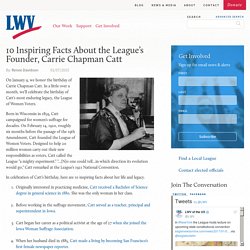 In a little over a month, we’ll celebrate the birthday of Catt’s most enduring legacy, the League of Women Voters. Born in Wisconsin in 1859, Catt campaigned for women’s suffrage for decades. On February 14, 1920, roughly six months before the passage of the 19th Amendment, Catt founded the League of Women Voters. Designed to help 20 million women carry out their new responsibilities as voters, Catt called the League "a mighty experiment. " Carrie Chapman Catt / What Has Been Accomplished for Womens' Rights. Carrie Chapman Catt[A speech delivered as a commencement address to the all female student body at Sweet Briar College, Virginia, 1936] "I bring a message to Sweet Briar College and especially to the Senior class so soon to step beyond its portals into the Great World. 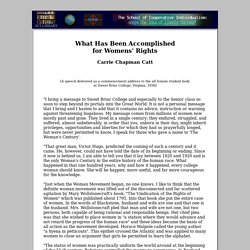 It is not a personal message that I bring and I hasten to add that it contains no advice, instruction or warning against threatening bugaboos. My message comes from millions of women now mostly past and gone. Carrie Clinton Lane Chapman Catt - Biography in Context. Catt, Carrie Clinton Lane Chapman (Jan. 9, 1859 - Mar. 9, 1947), feminist, internationalist, and leader of the woman suffrage movement, was born in Ripon, Wis., the second of three children and the only daughter of Lucius Lane, a farmer, and Maria (Clinton) Lane. 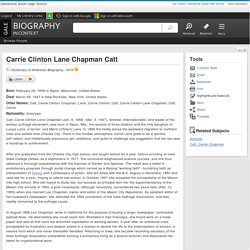 In 1866 the family joined the westward migration to northern Iowa and settled near Charles City. There in the frontier atmosphere Carrie Lane grew to be a spirited, self-reliant, and intellectually precocious girl, ambitious, and quick to challenge any suggestion that her sex was a handicap to achievement. After she graduated from the Charles City high school, she taught school for a year, before enrolling at Iowa State College (Ames) as a sophomore in 1877.

The curriculum emphasized science courses, and she thus obtained a thorough acquaintance with the theories of Darwin and Spencer. In August 1886 Leo Chapman, while in California for the purpose of buying a larger newspaper, contracted typhoid fever. Catt, Carrie Chapman. Carrie Chapman Catt Biography. Carrie Chapman Catt was an American women’s rights activist who campaigned for the Nineteenth Amendment of U.S. 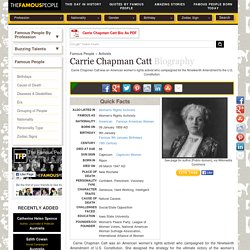 Constitution. She designed the strategy for the ultimate victory of the woman's suffrage movement and founded the League of Women Voters. Born in Wisconsin, Carrie was raised in lowa and worked as a teacher in order to pay her own way through Iowa State College. Then, she served as the superintendent of schools for a couple of years and worked in newspapers before getting involved in social activism. American feminist leader. Carrie Chapman Catt - Women’s History. The triumph of woman’s suffrage in the United States in 1920 was very much the work of Carrie Catt. 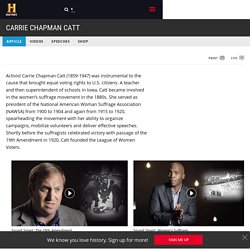 A brilliant strategist, she was twice president of the National American Woman Suffrage Association (nawsa), first from 1900 to 1904 and then in the dramatic final years of the struggle, from 1915 to 1920. Catt, born Carrie Lane in Ripon, Wisconsin, spent most of her youth in Iowa, where she went to college. Carrie Chapman Catt (1859-1947) - America Comes Alive. Suffragist and founder of the League of Women Voters Carrie Chapman Catt dedicated her life to campaigning for woman suffrage both in the United States and abroad. 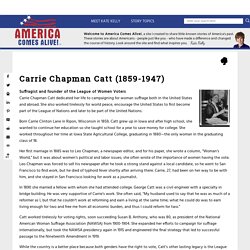 She also worked tirelessly for world peace, encourage the United States to first become part of the League of Nations and later to be part of the United Nations. Born Carrie Clinton Lane in Ripon, Wisconsin in 1859, Catt grew up in Iowa and after high school, she wanted to continue her education so she taught school for a year to save money for college. She worked throughout her time at Iowa State Agricultural College, graduating in 1880—the only woman in the graduating class of 18. 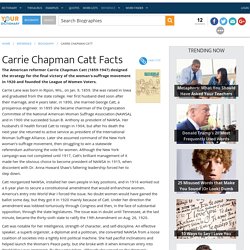 Carrie Lane was born in Ripon, Wis., on Jan. 9, 1859. She was raised in lowa and graduated from the state college. Carrie Chapman Catt - Women's Rights National Historical Park (U.S. National Park Service) Catt, Carrie Chapman - National Women’s Hall of Fame. Growing up on the Iowa frontier, young Carrie Lane was active and self-reliant. She worked to put herself through Iowa State College, and become a principal and school superintendent, which were unusual posts for a woman. When she married Leo Chapman, she joined him to co-edit a newspaper, but their marriage was cut short by his sudden death.

As a young widow, she took to the lecture platform and began to work for woman suffrage, first in Iowa and then nationally. Her second husband, George Catt, agreed she should devote two months each spring and fall to suffrage. She became a dynamic speaker, and exhibited a great talent for organization. Carrie Chapman Catt Girlhood Home and Museum: About Carrie Chapman Catt. Carrie Chapman Catt: A Biography Key coordinator of the woman suffrage movement and skillful political strategist, Carrie (Lane) Chapman Catt revitalized the National American Woman Suffrage Association (NAWSA) and played a leading role in its successful campaign to win voting rights for women.

In 1920 she founded the League of Women Voters upon ratification of the Nineteenth Amendment to the U.S. Biography. Women’s rights activist and suffragette Carrie Chapman Catt came up with the “Winning Plan” to pass the 19th amendment in 1920. Synopsis Born on January 9, 1859, in Wisconsin, Carrie Chapman Catt worked as a teacher to pay her own way through Iowa State College. She worked in the school system and for newspapers before joining suffrage movement in 1887. She took over the National American Woman Suffrage Association in 1900 and came up with the “Winning Plan” that helped pass the 19th Amendment in 1920.

Carrie Chapman Catt in Muckrakers & Reformers. Carrie Chapman Catt (1859-1947) was president of the National American Woman Suffrage Association (NAWSA) during the final push for the vote before the Nineteenth Amendment was ratified in 1920. She also founded the International Woman Suffrage Association and served as its honorary president until 1923. Catt worked at both the state and federal levels to support legislation to enfranchise women. A supporter of President Woodrow Wilson, she consequently opposed the more radical tactics of fellow NAWSA activist Alice Paul when Paul tried to provoke change by voting the Democrats out of office. Instead, Catt orchestrated a "winning plan" for suffrage victory that would coordinate activities among state and local suffrage associations.