MR. RIGHT Official Trailer (2016) Anna Kendrick Action Comedy Movie HD. What if the whole world went vegetarian? Chances are, if you're not a vegetarian yourself, you probably know at least one person who is. 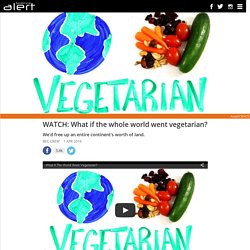 And depending on where you live in the world, the vegetarians you know could belong to a large chunk of the general population that foregoes meat, or a very small one. For example, in the US, the percentage of vegetarians is 4-5 percent, whereas in India, it's around 30 percent. But what would happen - scientifically speaking - if that percentage suddenly skyrocketed to 100 percent of humans all across the globe? As the latest episode of AsapSCIENCE explains, about 20 billon chickens, 1.5 billion cows, more than 1 billion sheep, and nearly 1 billion pigs that had been raised for their meat would suddenly have no use. It's not nice to think about how we'd get rid of them all when we can't exactly eat them out of existence, but let's just say that enormous herds of domesticated animals would pretty quickly disappear when there's no market to keep them around.

These implantable LCD lenses could replace glasses and contacts forever. Instead of having spectacles perched awkwardly on your nose, or itchy contacts that you can't stop losing, what if the same optical technology could be implanted inside the eyeball - a permanent set of contact lenses to correct your sight? 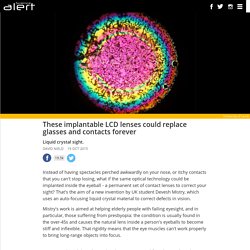 That's the aim of a new invention by UK student Devesh Mistry, which uses an auto-focusing liquid crystal material to correct defects in vision. Mistry's work is aimed at helping elderly people with failing eyesight, and in particular, those suffering from presbyopia: the condition is usually found in the over-45s and causes the natural lens inside a person's eyeballs to become stiff and inflexible. That rigidity means that the eye muscles can't work properly to bring long-range objects into focus. "Liquid crystals are a very under-rated phase of matter," he explained to The Times. "Everybody's happy with solids, liquids and gases and the phases of matter, but liquid crystals lie between crystalline solids and liquids. 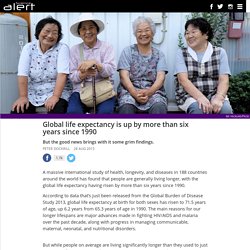 According to data that’s just been released from the Global Burden of Disease Study 2013, global life expectancy at birth for both sexes has risen to 71.5 years of age, up 6.2 years from 65.3 years of age in 1990. The main reasons for our longer lifespans are major advances made in fighting HIV/AIDS and malaria over the past decade, along with progress in managing communicable, maternal, neonatal, and nutritional disorders. But while people on average are living significantly longer than they used to just a quarter of a century ago, those extra years aren’t necessarily easy ones to bear. The upshot is we’re living longer, but on average we’re also spending a greater proportion of our lives living with the hardship caused by disability and illness. There's A New "Finding Dory" Trailer And The Film Really Does Seem Like It's Going To Be Emotional. Johnny Depp Explained That Hilarious And Painful-To-Watch Australian Apology Video.

Lobster Rolls & Potato Mountains on PEI: Keep it Canada (Episode 2) How to Cook From Tokyo's Vending Machines. MUNCHIES: Meatball Shop. The Guy who Survived on Pizza for 25 Years. Getting High off Asian Food with Eddie Huang. MUNCHIES: Momofuku Toronto. Heston's Great British Food S01E01 Fish And Chips. The Food Porn Superstars of South Korea: Mukbang. Munchies: Best Pizza. Getting Buzzed off Buckfast: MUNCHIES Guide to Scotland (Episode 1) Guide to Washington: Classic Seattle. Koreans React to 10 Countries With The Most Beautiful People by TheRichest. Korean Guys React to Women's Ideal Body Types Throughout History by BuzzFeed. 7 Genius Uses For An IRON You Have To Try! 10 Kitchen Tools Must Have #1. 5 Amazing Food Life Hacks Everyone MUST Know! 10 kitchen tools must have. 10 Clever Kitchen HACKS To Try Right Now. Korean try to tell Westerner apart.