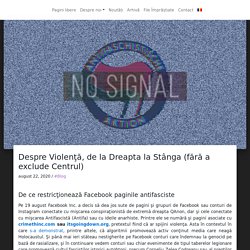 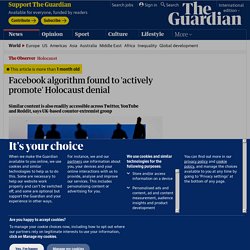 An investigation by the Institute for Strategic Dialogue (ISD), a UK-based counter-extremist organisation, found that typing “holocaust” in the Facebook search function brought up suggestions for denial pages, which in turn recommended links to publishers which sell revisionist and denial literature, as well as pages dedicated to the notorious British Holocaust denier David Irving. The findings coincide with mounting international demands from Holocaust survivors to Facebook’s boss, Mark Zuckerberg, to remove such material from the site. 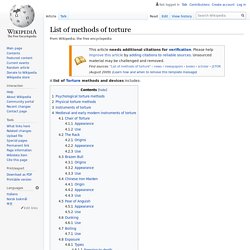 Also, many devices that can be used for torture have mainstream uses, completely unrelated to torture. Medieval and early modern instruments of torture[edit] Chair of Torture[edit] Appearance[edit] There are many variants of the chair, though they all have one thing in common: spikes cover the back, arm-rests, seat, leg-rests, and foot-rests. Use[edit] To avoid movement, the victim's wrists were tied to the chair or, in one version, two bars pushed the arms against arm-rests for the spikes to penetrate the flesh even further. This instrument's strength lies primarily in the psychological fear caused to the victims. The time of death greatly varied ranging from a few hours to a day or more. 11 Popular Songs the CIA Used to Torture Prisoners in the War on Terror. Imagine you are chained with your hands between your legs, crouching. 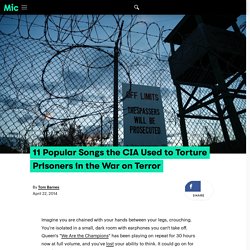 You're isolated in a small, dark room with earphones you can't take off. Queen's "We Are the Champions" has been playing on repeat for 30 hours now at full volume, and you've lost your ability to think. It could go on for months. Music torture has been common practice for the CIA ever since it began its "enhanced interrogation program" in the early 2000s. The process is designed to "create fear, disorient … and prolong capture shock" in prisoners. Sgt. Any torture method is of debatable merit — music torture was, in part, popular because it seemed more palatable to the public. Here are 11 songs that have been turned into torture devices. 1. Binyam Mohamed suffered Eminem's "Slim Shady" for 20 days. "I heard this nonstop over and over," he reportedly told Clive Stafford Smith, his lawyer and the founder and director of Reprieve, a U.K-based organization determined to end music torture practices. 2. 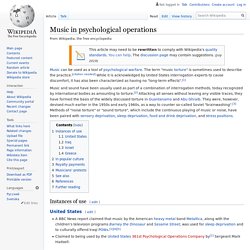 The term "music torture" is sometimes used to describe the practice. [citation needed] While it is acknowledged by United States interrogation experts to cause discomfort, it has also been characterized as having no "long-term effects".[1] Music and sound have been usually used as part of a combination of interrogation methods, today recognized by international bodies as amounting to torture.[2] Attacking all senses without leaving any visible traces, they have formed the basis of the widely discussed torture in Guantanamo and Abu Ghraib.

They were, however, devised much earlier in the 1950s and early 1960s, as a way to counter so-called Soviet "brainwashing".[3] Methods of "noise torture" or "sound torture", which include the continuous playing of music or noise, have been paired with sensory deprivation, sleep deprivation, food and drink deprivation, and stress positions. Instances of use[edit]