A Chinese Eco-City, Built In The Middle Of A Farm. Over the next 12 years, the Chinese government plans to move 250 million people from farms and villages to newly built cities. 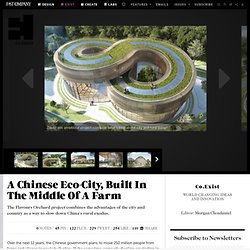 At the same time, some city dwellers are starting to escape back to the countryside, fed up with certain aspects of city life, like air pollution in Beijing that some scientists are now comparing to nuclear winter. A new development in Kunming hopes to offer a little of both urban and rural life: Sustainable buildings are built in the middle of a functioning farm. The “Flavours Orchard” project, designed by French architect Vincent Callebaut near the city of Kunming in southwest China, will be built on 22 acres of former industrial wasteland. It’s a way for China to “slow down the massive rural exodus it suffers by the creation of new urban prototypes mixing all the advantages of the city and the countryside,” Callebaut writes on his website. 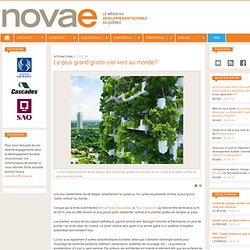 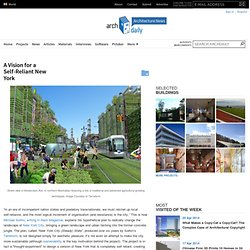 This is how Michael Sorkin, writing in Aeon Magazine, explains his hypothetical plan to radically change the landscape of New York City, bringing a green landscape and urban farming into the former concrete jungle. The plan, called “New York City (Steady) State”, produced over six years by Sorkin’s Terreform, is not designed simply for aesthetic pleasure; it’s not even an attempt to make the city more sustainable (although sustainability is the key motivation behind the project).

The project is in fact a “thought-experiment” to design a version of New York that is completely self reliant, creating its own food, energy and everything else within its own borders. Read on after the break to find out how New York could achieve self-reliance Aerial view of the South Bronx and Manhattan, Master Plan B. La première forêt résidentielle du monde pousse à Milan. 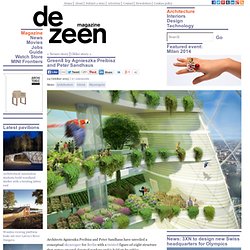 Agnieszka Preibisz and Peter Sandhaus, who are both based in Berlin, developed the design to contribute to a new masterplan being put together for the eastern quarter of the city. "The state of society in the twenty-first century requires that we develop new visions for living in densely populated inner cities," Preibisz told Dezeen. A Lush Living Wall Skirts Aedas' New Composite Building in Hong Kong. Instead of designing a swanky tower in an overcrowded neighborhood in Hong Kong, international architecture firm Aedas opted to create an apartment building that reinterprets Hong-Kong’s traditional architecture. 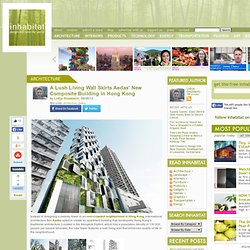 Located in the Mongkok District, which has a population density of 130,000 people per square kilometer, the new tower features a lush living wall that enhances quality of life in the neighborhood. The architects decided to add greenery at the pedestrian level with a green wall that will seemingly protrude from the solid façade of the podium and link the building to the historical cityscape. Structures from the post-war years, with illegal balconies and improvised gardens, are reinterpreted in a modern way “using irregular protrusions to create unobstructed views for each apartment.” 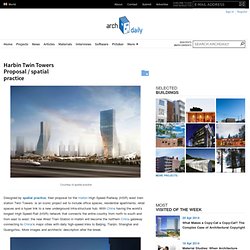 With China having the world’s longest High Speed Rail (HSR) network that connects the entire country from north to south and from east to west, the new West Train Station in Harbin will become the northern China gateway connecting to China’s major cities with daily high-speed links to Beijing, Tianjin, Shanghai and Guangzhou. More images and architects’ description after the break. Integration Harbin West Station is a transportation hub linked with the high-speed train station, Subway and Bus Station.The Kaishengyuan Towers take full advantage of sitting on a transportation hub not only connected to main cities in China but hyper-connected to Harbin City main infrastructure. Identity. Meghna Residence by Shatotto Architects. By Eric • Oct 6, 2011 • Selected Work Dhaka-based studio Shatotto Architects has completed the Meghna Residence project in 2005. 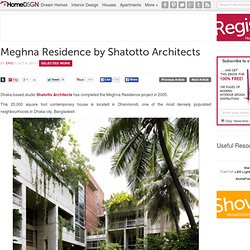 This 20,000 square foot contemporary house is located in Dhanmondi, one of the most densely populated neighbourhoods in Dhaka city, Bangladesh. Meghna Residence by Shatotto Architects: “Living in delta: Due to lack of a proper master plan, construction rules and awareness, Dhaka, one of the most densely populated cities in the world has become a city of urban mayhem. 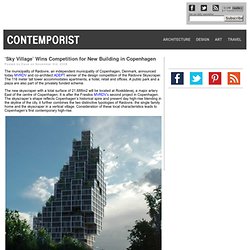 The 116 meter tall tower accommodates apartments, a hotel, retail and offices. A public park and a plaza are also part of the privately funded scheme. The new skyscraper with a total surface of 21,688m2 will be located at Roskildevej, a major artery East of the centre of Copenhagen. 18 Kowloon East by Aedas. Vent Vert by Edward Suzuki Associates. Green Cast by Kengo Kuma and Associates. Japanese studio Kengo Kuma and Associates has designed a small building in Odawara, a city located in western Kanagawa Prefecture, Japan. 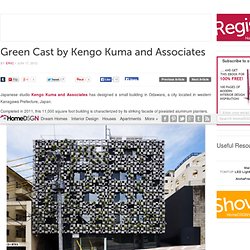 Completed in 2011, this 11,000 square foot building is characterized by its striking facade of pixelated aluminum planters. Green Cast by Kengo Kuma and Associates: “The façade of the building is covered with planters made of aluminum die-cast panels, which provides space for facilities. The 3 (up to 6) aluminum panels, which also form planters, are made in monoblock casting. Culture Forest / Unsangdong Architects ~ DesignDaily. Courtesy of Unsangdong Architects Unsangdong Architects shared with us their 1st prize winning project “Culture Forest”, a Culture & Art Center located in SeongDong-gu, Republic of Korea. 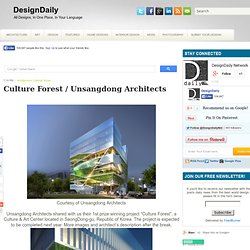 What is green architecture? Minimalisti.com  The green architecture, or the so called durable construction, has the goal of using nature in a better way, without harming it. The green architecture building has its own cycle of life, which encompasses everything – from a rough construction to the smallest detail, following the laws of comfort and rationality. The so called passive houses are like living creatures. They are oxygen-powered. Upon taking in air, they process it, releasing the used polluted air on the outside, thus keeping the temperature in the place steady and disallowing the formation of moisture in the process. The green architecture building is composed of natural materials, it has big windows, so that natural light can get in easier, and it uses photoelectric cells and sun batteries. The roof of the house is usually the most thermally entrusted part of the building.

The way buildings are designed can make a huge impact in our efforts to reduce our carbon footprints. While the concept of green buildings isn’t new, it is only now that people are giving it serious thought. Making use of nature’s alternative sources of fuel through the utilization of solar, wind and tidal energy, waste management as well as increasing vegetation by constructing green roofs and rain gardens are just some of the methods used to help a building achieve green status.

The ultimate goal is to be able to harvest more energy than is consumed, where the excess can be rolled back to a grid for future use. Water, which is a growing scarcity, can also be better conserved as waste water management is employed. NL architects: super market sanya lake park. Apr 30, 2013. Les immeubles végétalisés autour du jardin Biopark (Paris 13e)