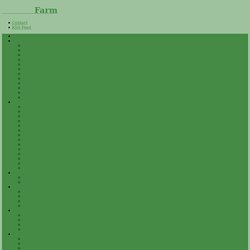 In small saucepan, whisk together peanut butter and hot water until you have a uniform mixture. 2. Whisk in remaining sauce ingredients and set aside. Cara's Crispy Orange Cauliflower. Vegan Glutenfree Recipe. Homemade Veggie Dogs. Af few weeks ago, my family had a craving for hot dogs, and having heard so much about Field Roast Frankfurters*, I decided to give them a try. 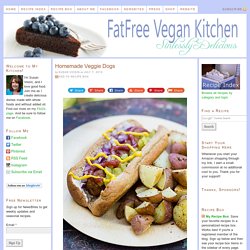 When I found them in the store and took a look at the package, it took a few minutes to get over my sticker shock, not at the price but at the nutritional stats. Each hot dog clocked in at 180 calories and 8 grams of fat. The ingredients list included “expeller pressed safflower oil” and “organic expeller pressed palm fruit oil,” ingredients I normally try to avoid. Angie's Recipes: Braised Bean Curds,红烧豆腐. How to Make Epic Vegan BBQ Tofu Wings. Before I became vegan, my dream job was to be a Buffalo and BBQ wing reviewer. 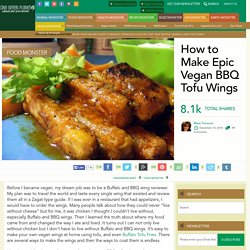 My plan was to travel the world and taste every single wing that existed and review them all in a Zagat-type guide. If I was ever in a restaurant that had appetizers, I would have to order the wings. Many people talk about how they could never “live without cheese” but for me, it was chicken I thought I couldn’t live without, especially Buffalo and BBQ wings.

Then I learned the truth about where my food came from and changed the way I ate and lived. It turns out I can not only live without chicken but I don’t have to live without Buffalo and BBQ wings. Sticky Peanut Cauliflower Wings [Vegan, Gluten-Free] Sticky, salty, spiced and totally addictive: these Sticky Peanut Cauliflower ‘Wings’ might be a side dish, but this is one recipe that will have everyone overlooking the main meal at dinner; and once served, these tempting morsels don’t hang around for long on the table (never mind even making it to a plate). 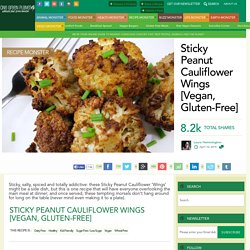 Sticky Peanut Cauliflower Wings [Vegan, Gluten-Free] Ingredients 1 medium cauliflower1 tbsp crunchy peanut butter (sugar-free)2 tsp solid coconut oil (about 20g)1 tbsp tamari or other good soy sauceJuice of ½ lime (reserve the other ½ for serving)1 tsp garam masala Preparation Preheat the oven to 400°F.Cut the cauliflower into bite-size florets and combine in a baking tin or dish with the rest of the ingredients, ensuring each piece of cauliflower is nicely coated with the mixture.Spread out the cauliflower evenly, without overlapping too much.Cover with foil and place in the top of the oven for 15 minutes. Dublin Coddle with Vegan Irish Sausage. Finding something different to make for St. 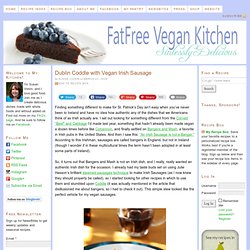 Vegan Poutine. March 6, 2013 Poutine is a Canadian favorite made of french fries, beef gravy, and cheese. 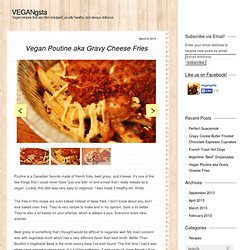 It’s one of the few things that I could never have “just one bite” of and a treat that I really missed as a vegan. Luckily, this dish was very easy to veganize. I also made it healthy-ish. Kinda. The fries in this recipe are oven baked instead of deep fried. Vegan Toad in the Hole ~ Hef's kitchen. Biscuits and Gravy. Recipe: Tangerine Tofu. Tofu Scramble Ranchero — Adventures in Vegan Cooking - Recipes and Tutorials. The Country Vegan: Mushroom Goulash/Stroganoff. Here is another Russian/East European/German/Austrian inspired favourite of mine. 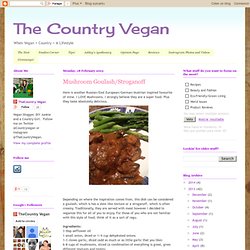 I LOVE Mushrooms. I strongly believe they are a super food. Plus they taste absolutely delicious. Depending on where the inspiration comes from, this dish can be considered a goulash, which is has a stew like texture or a stroganoff, which is often creamy. Traditionally, they are served with meat however I decided to veganize this for all of you to enjoy. Gluten Free Green Bean Casserole. Looking for a Green Bean Casserole recipe using REAL ingredients? 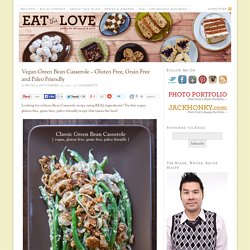 Try this vegan, gluten-free, grain-free, paleo-friendly recipe that tastes the best! You know that feeling you get when your mom pulls out those drawings you did when you were in junior high and showing them to your friends and loved ones during the holidays? “You were so talented! Look at this!” Warm Lentils and Mushrooms {recipe} and Martha Stewart’s Cooking School Cookbook Winner! While we’re on the subject of giveaways… We might as well announce a couple of winners from last month’s giveaways, including Christine C, who won a copy of the giant Martha Stewart’s Cooking School cookbook! 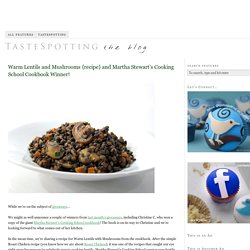 The book is on its way to Christine and we’re looking forward to what comes out of her kitchen. In the mean time, we’re sharing a recipe for Warm Lentils with Mushrooms from the cookbook. After the simple Roast Chicken recipe (you know how we are about Roast Chicken), it was one of the recipes that caught our eye right away because we’re relatively new to cooking lentils. Martha Stewart’s Cooking School version uses lentils de Puy, but the warm vinaigrette would be great with any type of lentil or bean. 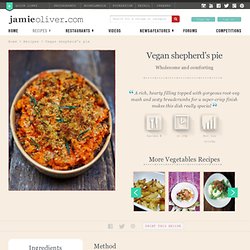 Place the Maris Pipers into a large pan of cold salted water over a medium heat. The Best Vegan Burger. Close Buying sustainably sourced fish means buying fish that has been caught without endangering the levels of fish stocks and with the protection of the environment in mind. Wild fish caught in areas where stocks are plentiful are sustainably sourced, as are farmed fish that are reared on farms proven to cause no harm to surrounding seas and shores. When buying either wild or farmed fish, ask whether it is sustainably sourced.

If you're unable to obtain this information, don't be afraid to shop elsewhere – only by shopping sustainably can we be sure that the fantastic selection of fish we enjoy today will be around for future generations. For further information about sustainably sourced fish, please refer to the useful links below: Beer Battered Tofu Tacos with Chipotle Aioli (Vegan) - 40 Aprons. Filet O' Chickpea Sandwich with Tartar Sauce Slaw - You know how when you’re a kid, you form minor, fleeting obsessions with things? Making tofu - The Tofu Box. These 27 Vegan Pizzas Will Blow Your Mind. Happy Vegan Pizza Day! Today, celebrate the different varieties of everything that makes vegan pizza delicious; allergy-friendly; and kinder for us, the animals, and the planet. How to Make Homemade Spicy Italian Sausage (Vegan, Soy-Free and Gluten-Free)

These sausages are firm enough to hold up on the grill. When you cook them, they are crispy on the outside, tender on the inside but not mushy, and filled with spicy, Italian flavor. Using black-eyed peas instead of pintos removed the “beany” taste and provided a neutral background for the spices to shine through. The same recipe can be used with different spice mixes to make breakfast sausages, chorizo sausages, or apple sage sausages. They can be sliced up to use in other recipes or eaten whole on a hero with sauteed peppers and onions.

You can shape them into links or patties. Sunday Morning Banana Pancakes: walnut bella "meatball" subs. 23 Ways To Rock Your Vegan Barbecue. 10 Vegetables That Can Substitute for Meat. Chipotle Sofritas Recipe. The Gourmet Vegan “Can’t tell the difference” Quiche. Called the “Can’t tell the difference” quiche because this is indeed as close in both taste and texture as a dairy based quiche. I have never missed eggs, in fact, even before becoming vegan they were something i ate very infrequently, but I did miss the light and fluffy texture of a quiche. Vegan Tortellini with Roasted Pepper Cream Sauce. Peanut Noodles (gluten-free & vegan) Creamy Avocado ‘Carbonara’ Cashew cream? Boring. Soy cream? ♥ KFC: Kentucky Fried Copycat. Mollie Katzen. Sweet potato falafels with coleslaw. Meet The Shannons: The Betty Crocker Project : Corned Beef-less Tips & Cabbage.

I recently decided to never watch the movie Short Circuit ever again. I'll give you all a moment to recover. Now before you all assume that I was afraid of the sentient robot who was originally built to be the ultimate weapon... that's not it. Fully-loaded vegetable pot pie [Vegan, Gluten-Free] Now that the days are chilly and nights are downright frosty, it's a great comfort to make a piping hot meal that warms you from the inside out. Vegan Crab Cakes. Summer isn’t over, right? Okay, good. So when you’re done listening to summer jams and hanging out at the beach, round up the last of this season’s zucchini and make these vegan crab cakes.