AP US History Study Guide from The Gilder Lehrman Institute of American History. U.S. History - Document - Gender and Political Activism. Full Text: In 1886, an Irish immigrant woman named Leonora Barry began her new job as an organizer and lecturer for the Knights of Labor, then the fastest-growing labor union in the United States. 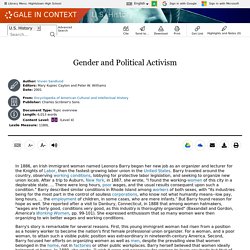 Barry traveled around the country, observing working conditions, lobbying for protective labor legislation, and seeking to organize new union locals. After a trip to Auburn, New York, in 1887, she wrote, "I found the working-women of this city in a deplorable state. ... There were long hours, poor wages, and the usual results consequent upon such a condition. " Barry described similar conditions in Rhode Island among workers of both sexes, with "its industries being for the most part in the control of soulless corporations, who know not what humanity means--low pay, long hours, ... the employment of children, in some cases, who are mere infants. " Barry's story is remarkable for several reasons. U.S. History - Document - Immigration. Full Text: During the Civil Rights era (roughly the late 1950s through the 1970s) Americans began paying increased attention to the nature of violence and its historical roots in the United States. 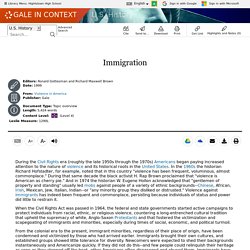 In the 1960s the historian Richard Hofstadter, for example, noted that in this country "violence has been frequent, voluminous, almost commonplace. " During that same decade the black activist H. Rap Brown proclaimed that "violence is American as cherry pie. " U.S. History - Document - Progressive Era Immigration and Naturalization. View from a ship in New York Harbor nearing Ellis Island, c. 1900. 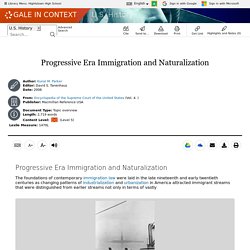 As the U.S. Constitution grants Congress the sole power to create immigration law, rules and regulations regarding the admittance of immigrants have evolved through the decades. Consequently, during the late nineteenth and early twentieth centuries, many race-based limitations were placed on acquiring citizenship, restrictions considered outside the reviewing power of the Supreme Court. ARCHIVE HOLDINGS INC. /GETTY IMAGES. U.S. History - Document - Asian Exclusion Laws. The discovery of gold, a rice shortage, and the recruitment of Asian labor led to the initiation of noticeable Asian migration in the nineteenth century, triggering a backlash of exclusion laws. 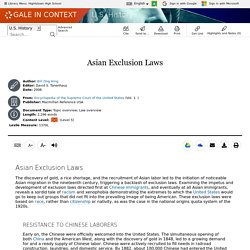 Examining the impetus and development of exclusion laws directed first at Chinese immigrants, and eventually at all Asian immigrants, reveals a sordid tale of racism and xenophobia demonstrating the extremes to which the United States would go to keep out groups that did not fit into the prevailing image of being American. Mexican Americans and Southwestern Growth. Printable Version Mexican Americans and Southwestern Growth Digital History ID 597 Author: Samuel Bryan Date:1912 Annotation: Americans are familiar with the huge industrial complexes that arose in the late nineteenth-century Northeast and Midwest: the Carnegie Steel Company or the Pullman. 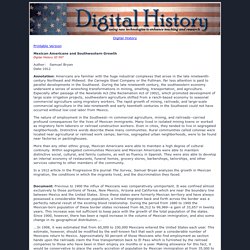 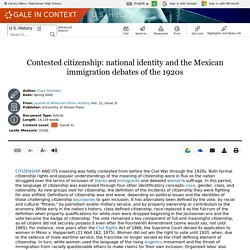 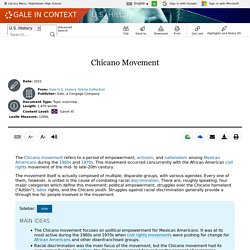 Every one of them, however, is united in the cause of combating racial discrimination. There are, roughly speaking, four major categories which define this movement: political empowerment, struggles over the Chicano homeland ("Aztlán"), labor rights, and the Chicano youth. Struggles against racial discrimination generally provide a through line for people involved in the movement. U.S. History - Document - Labor Movement. Full Text: In the last decades of the nineteenth century it appeared that labor was unable effectively to challenge the combined wealth and power that capitalism in its industrial phase had created. 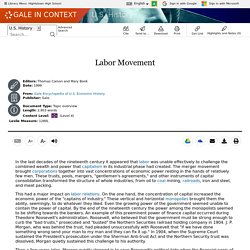 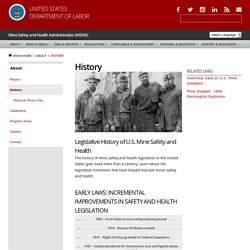 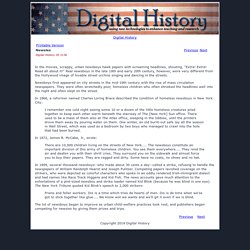 Extra! Read all about it! " Photographer documented work life of child laborers in the early 1900s.

Use your school Google login to access Newsela. – kkryscnski

Progressive era reform movement. New Georgia Encyclopedia. The Progressive Era refers to a period of varied reforms that took place throughout the United States over the first two decades of the twentieth century. While much of that change was enacted by the U.S. Congress under the leadership of three consecutive presidents—Theodore Roosevelt, William Howard Taft, and Woodrow Wilson—it was also a movement that generated a variety of changes at the state and local levels as well. Most state governments, including Georgia's, generated Progressive reforms that sometimes coincided with, but sometimes differed from, those enacted at the federal level.

How the Gilded Age Led to the Progressive Era - HISTORY. Propelled by a Second Industrial Revolution, the United States arose from the ashes of the Civil War to become one of the world’s leading economic powers by the turn of the 20th century. Corporate titans such as Andrew Carnegie, John D. Rockefeller and J.P. The Progressive Era (Progressive movement) U.S. Department of Labor: Progressive Era Investigations. There was great interest during the Progressive Era (1900-1917) in investigation and amelioration of hazardous working conditions. President Theodore Roosevelt had championed the conservation movement and broadened its scope to include the saving of human life. It was but a short step from there to protecting the lives and limbs of industrial workers. Through settlement houses and other urban social work, reformers aided workers and their families and entreated employers to eliminate dangerous working conditions and other abuses. Muckraking journalists and others gave nation‑wide publicity to accidents and unsafe conditions.113 From 1902 to 1907 The Factory Inspector, unofficial journal of the Inter­national Association of Factory Inspectors, regularly published accounts gathered by state labor bureaus of industrial accidents.

“In plain sight of a hundred fellow‑workmen, Martin Stoffel was cut into small pieces at the Philadelphia Caramel Works ... Labor Movement - HISTORY. The labor movement in the United States grew out of the need to protect the common interest of workers. For those in the industrial sector, organized labor unions fought for better wages, reasonable hours and safer working conditions. The labor movement led efforts to stop child labor, give health benefits and provide aid to workers who were injured or retired. Free Speech in the Progressive Era.   Classroom Materials at the Library of Congress   Pbslearningmedia: Videos - The Progressive Era. The Progressive Era: Crash Course US History #27.