Omar Khadr Leaves Guantanamo, While Press Refuses to Report His Water Torture. Omar Khadr as he looked when he was first sent to Guantanamo. 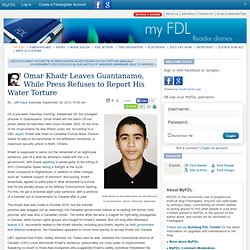 (photo: Sherurcij / wikimedia) On a pre-dawn Saturday morning, September 29, the youngest prisoner in Guantanamo, Omar Khadr left the harsh US-run prison where he had been held since October 2002. Wilson: Talking Dog Interview. March 7, 2006The Talking Dog Blog Interview with Rick Wilson On February 22, 2006, I had the privilege of speaking with Professor Rick Wilson of American University's Washington College of Law, one of the civilian attorneys representing Omar Khadr, a 19-year old Canadian national now detained at Camp 4, Guantanamo Bay, Cuba. 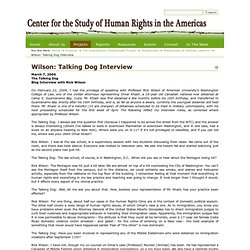 Mr. Khadr was first detained a few months before his 16th birthday, and transferred to Guantanamo Bay shortly after his 16th birthday, and is, as far as anyone is aware, currently the youngest detainee still held there. Mr. Khadr is one of a handful (10 are charged) of detainees scheduled to be tried in military commissions, with his next proceeding scheduled for the first week of April.

Rick Wilson: I was at the law school, in a supervisory session with two students discussing their cases. Guantanamo Bay: Who cares for this boy? Cageprisonersby Moazzam BeggAugust 2, 2008 His hair has grown, his voice sounds a little deeper and his wounds appear to have healed somewhat. 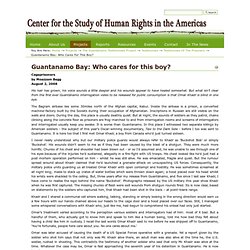 But what isn’t clear from the first ever Guantánamo interrogation video to be released for public consumption is that Omar Khadr is blind in one eye. The Bagram airbase lies some 30miles north of the Afghan capital, Kabul. Inside the airbase is a prison, a converted machine-factory built by the Soviets during their occupation of Afghanistan. Inscriptions in Russian are still visible on the walls and doors. I never really understood why but our military police guards would always refer to Khadr as 'Buckshot Bob' or simply ‘Buckshot’. Khadr and I shared a communal cell where walking, talking, standing or simply looking in the wrong direction would earn us a few hours with our hands chained above our heads to the cage door and a hood placed over our faces.

Detained like me: The Guantanamo Ordeal of Omar Khadr. Jurist Hotlineby Moazzam BeggMarch 17, 2008 In January this year, a training document produced by the Canadian foreign ministry, which referred to Guantanamo Bay, listed the United States as a country known to practice torture. 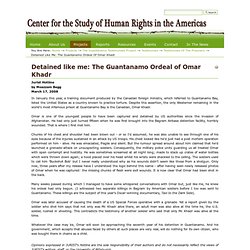 Despite this assertion, the only Westerner remaining in the world's most infamous prison at Guantanamo Bay is the Canadian, Omar Khadr. Omar is one of the youngest people to have been captured and detained by US authorities since the invasion of Afghanistan. He had only just turned fifteen when he was first brought into the Bagram Airbase detention facility, horribly wounded. That is where I first met him. Chunks of his chest and shoulder had been blown out - or so I'd assumed; he was also unable to see through one of his eyes because of the injuries sustained in an attack by US troops. Many weeks passed during which I managed to have some whispered conversations with Omar but, just like me, he knew his ordeal had only begun.

Get original here. The Unending Torture of Omar Khadr. In July 2002, a Special Forces unit in southeast Afghanistan received intelligence that a group of Al Qaeda fighters was operating out of a mud-brick compound in Ab Khail, a small hill town near the Pakistani border. 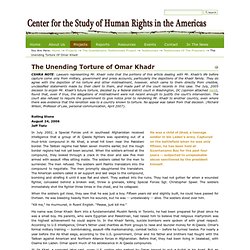 The Taliban regime had fallen seven months earlier, but the rough border regions had not yet been secured. When the soldiers arrived at the compound, they looked through a crack in the door and saw five men armed with assault rifles sitting inside. The soldiers called for the men to surrender. The men refused. Orwellian Circus: Khadr’s Trial.

Omar Khadr was taken as a child from his home in Canada to live in Afghanistan. 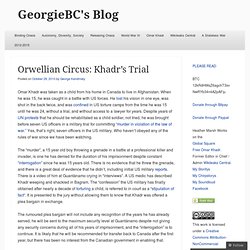 When he was 15, he was caught in a battle with US forces. Some Guantánamo detainees are security threats. Omar Khadr isn’t one of them. “Punitive post-conviction confinement” [4. This article is in lieu of the long delayed fourth part of the Omar Khadr series written on WL Central last May. 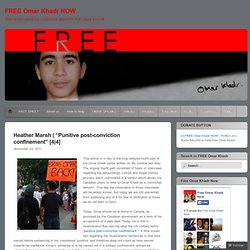 The original fourth part consisted of hours of interviews regarding the astoundingly corrupt and illegal military process which culminated in a verdict which allows the Canadian press to refer to Omar Khadr as a ‘convicted terrorist’. One day the information in those interviews will be widely known, but today we are still prevented from publishing any of it for fear of retribution to those we do not wish to harm. 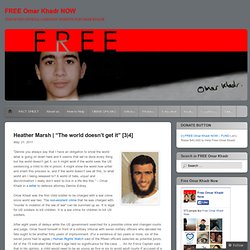 Canada, the entire world is still watching [2. “There would be virtually no political blowback domestically for the Conservative Party if the government chooses to pursue an appeal, making this a strong likelihood.” 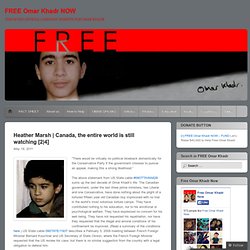 The above statement from US State cable #09OTTAWA629 sums up the last decade of Omar Khadr’s life. The Canadian government, under the last three prime ministers, two Liberal and one Conservative, have done nothing about the plight of a tortured fifteen year old Canadian boy imprisoned with no trial in the world’s most notorious torture camps. They have contributed nothing to his education, nor to his emotional or psychological welfare. They have expressed no concern for his well being. They have not requested his repatriation, nor have they requested that the illegal and amoral conditions of his confinement be improved.

“I was very hopeful that they would help me. “After the Canadians left and I told the Americans that my previous statements were untrue, life got much worse for me. Complicity, lies and endless lawsuits. “Omar Khadr is a lovely young man” [1. Omar Khadr (centre in the picture) was born in Toronto, Canada on September 19, 1986. 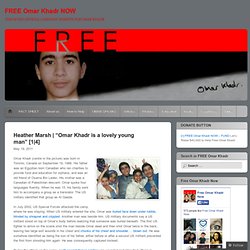 His father was an Egyptian born Canadian who ran charities to provide food and education for orphans, and was an old friend of Osama Bin Laden. His mother was a Canadian of Palestinian descent. Omar spoke four languages fluently. When he was 15, his family sent him to accompany a group as a translator. The US military identified that group as Al Qaeda. In July 2002, US Special Forces attacked the camp where he was staying. Toronto Star coverage of Omar Khadr since his Guantanamo military trial. Posted july 20, 2012 by Heather Marsh In a case like Omar Khadr’s, where one full decade of complicated legal evidence and misinformation have combined to make a quick assessment of the facts impossible for the average Canadian, the tone of everyday mainstream media coverage is all important.

Every quick article updating news on the case also serves as an opportunity to present a simple sketch of Khadr. Petition for Clemency and Dr Sageman’s rebuttal of Welner. Posted on July 23, 2012, by Heather Marsh Reference Documentation:Petition for Clemency.Dr. Sageman letter.Appendix A. This week, Canadian Public Safety Minister Vic Toews requested unredacted copies of videos and interviews that psychiatrists Michael Welner and Alan Hopewell conducted with Khadr at Guantanamo Bay to determine his mental state. Besides the fact that Canada has now had one decade to determine Khadr’s mental state, the implication of the request is that Canada’s new prisons are not equipped to defend against an inmate about whom professional prosecution witness Welner said “future risk is actually more in a capacity to inspire” than to do violence himself.

But that is not the most incredible aspect of this latest stalling tactic. In March 2011, Omar Khadr’s defense submitted a Petition for Clemency. Dr. The Silence Surrounding Omar Khadr. FREE Omar Khadr. [+] FACT SHEET Omar Khadr ( PDF) At the tender age of 15, Omar began a nightmarish journey that lasted 11 years of his life, from Bagram to Guantanamo Bay.

The trauma continues due to Canada’s continuation of its citizen’s incarceration in maximum security prison. Canada is the only Western country that refuses to stand up for the rights of its citizen. All other Western countries have repatriated and freed their citizens immediately from Guantanamo Bay.