Napoli Ultras arrested. Napoli Ultras’ leader Gennaro De Tommaso has been arrested along with four other club fans in relation to the 2014 Coppa Italia Final incidents in May. 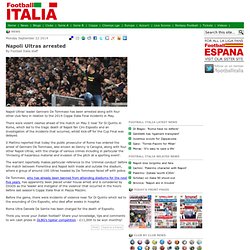 Napoli fan fights for life in hospital after Rome football violence. A 27-year-old football fan is fighting for his life in a Rome hospital following some of the worst football-related violence seen in Italy. 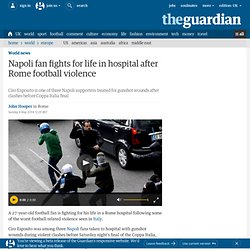 Ciro Esposito was among three Napoli fans taken to hospital with gunshot wounds during violent clashes before Saturday night's final of the Coppa Italia, Italy's equivalent of the FA Cup. A fourth man, Daniele De Santis, was under police guard in hospital accused of attempted murder. De Santis, 48, is one of Italy's best-known Ultras, the organised fans associated with much of the violence that surrounds the game in Italy. 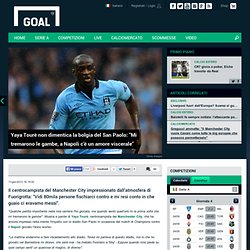 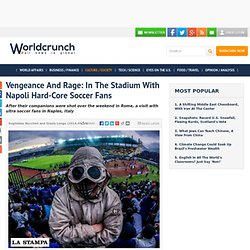 According to Italian media quoting police sources, so-called ultra fans of a third team — AS Roma (the game was held in Rome’s Stadio Olimpico) — are accused of using smoke bombs to ambush a group of Napoli fans. When the victims responded, Daniele De Santis, one of Roma’s ultra leaders, allegedly pulled out a gun and started shooting. Two La Stampa reporters joined Napoli’s ultras for Tuesday’s home game against Cagliari and smelled revenge in the air.

NAPLES — It took a while, but finally the general consensus came. Naples. Sandwiched between a sleeping volcano and the steaming Campi Flegrei, Naples is a rumbling mass of contradictions. 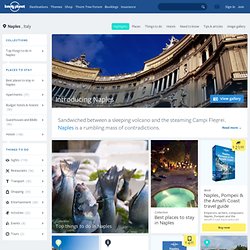 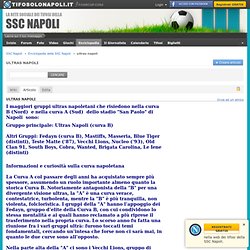 Ultra culture: the positive side of Italian support - World Soccer. Ultras are woven through Italian football culture, from when the first groups began to emerge in the 1950s to today, with the flare-wielding, flag-bearing maniacs still being found in the curve of nationwide football stadia on a Sunday afternoon. 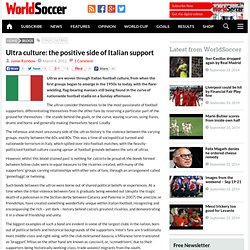 The ultras consider themselves to be the most passionate of football supporters, differentiating themselves from the other fans by reserving a particular part of the ground for themselves – the stands behind the goals, or the curve, waving scarves, using flares, drums and horns and generally making themselves heard. European Football Weekends: S.S.C. Napoli. "Napoli is my life" Napoli are the Marmite of Italy. 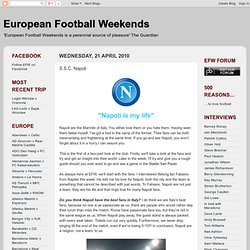 You either love them or you hate them. Having seen them twice myself, I've got a foot in the camp of the former. Their fans can be both mesmerising and frightening at the same time. If you go and see Napoli, you won't forget about it in a hurry I can assure you. This is the first of a two-part look at the club. As always here at EFW, we'll start with the fans. Società Sportiva Calcio Napoli. Da Wikipedia, l'enciclopedia libera. 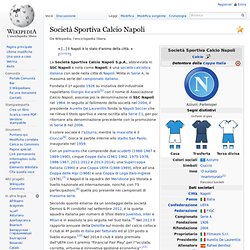 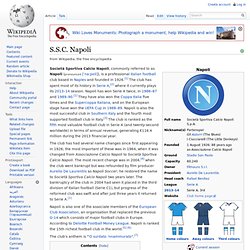 Napoli has won Serie A twice, in 1986–87 and 1989–90.[1] They have also won the Coppa Italia five times and the Supercoppa Italiana, and on the European stage have won the UEFA Cup in 1988–89. Run-ins with the ultras - News & Comment - Football. It is impossible to go to Naples without being warned about the pickpockets, the grime and the menace of organised crime in the form of the Camorra. Any time spent there will disprove most of the clichés, though. It is a city that leaves an indelible mark on the visitor. One cliché at least is accurate: this is a city whose heart beats football and whose blood runs sky-blue. For many Neapolitans, Società Sportiva Calcio Napoli is everything.

The generation of Edinson Cavani, Marek Hamsik and Ezequiel Lavezzi has now brought hope to a sleeping giant that has suffered appalling mismanagement on and off the field, relegation and bankruptcy in the past decade. The reported violence in recent games against Liverpool and Manchester City is almost unheard of in Serie A nowadays, but it was a different story over a decade ago. The team had returned to the top flight three years after being relegated with a dismal return of just 14 points from 34 games. SONS OF BITCHES: ULTRAS AND MARADONAPOLI. This is Italia. While the 1982 World Cup victory created some temporary commonality among Italians the cracks were still there, evident in violence among increasingly extreme football fans.

As Winston Churchill apparently quipped: ‘Italians lose wars as if they were football matches and play football matches as if they were wars.’ Inter-fan rivalries pre-dated Fascism’s take-over of the game and continued after the war, with a notorious match between Napoli and Bologna, in 1955, involving a pitch invasion and an exchange of shots between fans and police.

Rarely premeditated however, crowd disorder was usually an impetuous, unplanned reaction to on-the-field events. This changed in the 1960s, with pitch invasions, violence and confrontations with the police reflecting and releasing society’s accumulated tensions. Political riots brought an increased potency in the equipment and techniques of repression used by police and carabinieri. Their relationship with the Argentinian was intense.