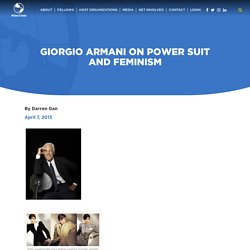 Represent Esquire China, I e-interviewed Italian fashion designer Giorgio Armani. In 1980s, the second wave and the third wave of feminism was happening all over the world, and that’s when Armani created “power suit”. Younger generation might not be familiar with it, but I can illustrate in this way: nearly all the formal womenswear is inspired by Giorgio Armani’s power suit.

However, how is the designer’s own reflection on feminism and his creation? I attached my interview with him here for your reference. You have been named special ambassador of Expo 2015. Being named as Special Ambassador has made me very proud, and it will allow me to give my personal contribution to Expo. Another exciting event is the upcoming opening of the Armani/Silos, which will house a complete archive of these 40 years. I wouldn’t say that the power suit was a reflection of feminism. 1963: the beginning of the feminist movement. "Is this all? 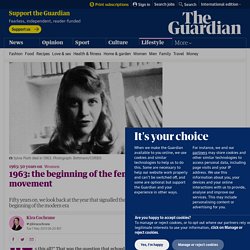 " That was the question that echoed around a generation of US housewives in the early 1960s. Theirs was the problem with no name, wrote Betty Friedan in her 1963 bestseller, The Feminine Mystique, and the symptoms were legion. They included creeping fatigue, tranquiliser and alcohol abuse, bleeding blisters that appeared suddenly on their arms, which doctors attributed not to the cleaning fluids they used constantly, but a deeper malaise. In the years since the war, women had grown smaller (department store buyers reported they had shrunk three or four dress sizes), more feminine (30% of women dyed their hair blond), and apparently much sadder. That icon of femininity, Marilyn Monroe, had died of an overdose the year before, and Sylvia Plath – just as outwardly feminine, but with a hidden, crackling rage – killed herself in London in 1963. A desperate, exaggerated femininity was being held up as an ideal for all women. Feminism's Effect on Fashion. A year ago, Klein, who has the ability to sense what women want before they know it, designed a fall collection that, of course, had pants— plus a lot of longer, fuller skirts and looser tops. 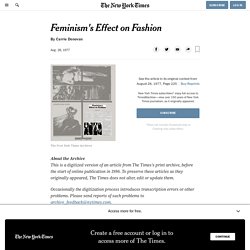 Everything was softer, less tailored. The collection was not understood by everyone, stores and press included. “But it was the biggest fall season we ever had,” says Klein. “My job is to understand women, not stores.” Klein's fall ‘77 clothes have no traces of menswear tailoring. Which brings us to the dress. The renaissance of the dress owes much to Diane von Furstenberg. Another element in the success of the Diane von Furstenberg dress was that it shows off the body —in a nice way.

Feminism timelines. Women's studies in unversities. Quant & Timeline mini skirt. Marlen Komar. Newspaper/magazine articles. TR guidelines. Why Did Rosie Wear a Bandana? – Women’s Museum of California. The Power Suit’s Subversive Legacy. The Stiletto Heel Is The Embodiment Of Post-war Material Science. Which has had the bigger impact? fASHION ON FEMINISM or feminism on fashion. Academic articles. Whats-on-event. From the runway to the Ulster Museum, this exhibition will explore the origins of the most talked about trend in fashion today: Feminism. 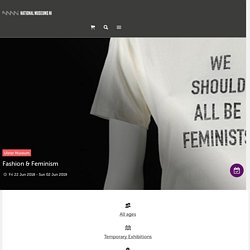 In 2017 Maria Grazia Chiuri, the first ever female designer for Dior, caused a stir when her debut collection featured a simple white t-shirt with the slogan “We Should All Be Feminists”. Not long after, the Italian designer knitwear brand Missoni staged its own mini women’s march by sending dozens of models down the runway wearing the brand’s own version of pussyhats. It seemed as though out of nowhere, feminism was suddenly fashionable. Yet, the links between modern fashion and feminism go much further back than today’s trends, as this exhibition will show. Some highlights include: Ulster Museum explores links between fashion and feminism - Belfast Newsletter. Designs from top names in fashion including Missoni and Dior are among pieces which have just gone on display at the Ulster Museum as part of a new exhibition entitled Fashion and Feminism. 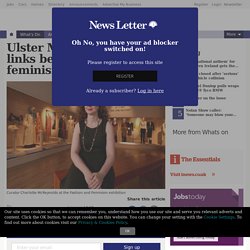 From runways to picket lines, the pieces in the exhibition tell the story of women who have made confident feminist statements through their sartorial choices. Fashion and Feminism examines the attitudes of feminists, from as far back as the 1800s right up to today, as they use clothes to express their belief in the social, political and economic equality of men and women. Items on display include an elegant walking suit perfect for a suffragette ‘dressed to protest’ (1910), a Missoni ‘Pussy Hat’ (2017), based on the worldwide ‘Women’s March’ of January 2017, and the iconic ‘We Should All Be Feminists’ T-shirt designed by Dior (2017), inspired by Chimamanda Ngozi Adichie’s essay and the TEDx talk of the same name.