You Should Know This 2

" E.O. 12803 tells us this power cleared the way for the "disposition or transfer of an infrastructure "asset" such as by sale or by long-term lease from a State or local government to a private party." 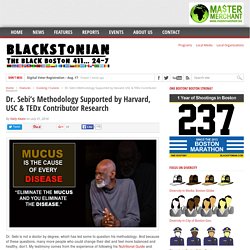 Sebi is not a doctor by degree, which has led some to question his methodology. And because of these questions, many more people who could change their diet and feel more balanced and healthy, don’t. My testimony comes from the experience of following his Nutritional Guide and taking his compounds. They have led me to feel better than I have ever felt in my life; and at 40, that’s exciting! My adult acne, joint pain, constipation, inflammation. Dr. Dr. The Harvard researchers report that a virus, fungus or bacterium gets into the brain, passing through a membrane — the blood-brain barrier — that becomes leaky as people age. Again, Dr. For more information about Dr. For a guide on how to construct a 7 day food detox, take a look at the Mucus Free Food Detox. Chemtrails / GeoEngineering: the Greatest Crime of All Time…. and Here’s the Evidence - RiseEarth. This article is dedicated to the courageous people around our planet who have spoken out and written about these crimes. 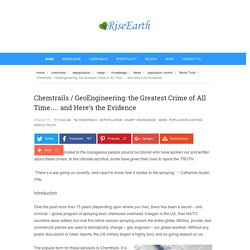 In the ultimate sacrifice, some have given their lives to report the TRUTH. “There’s a war going on covertly; and I want to know how it relates to the spraying.” ~ Catherine Austin Fitts. Introduction Over the past more than 15 years (depending upon where you live), there has been a secret – and criminal – global program of spraying toxic chemicals overhead. It began in the US, then NATO countries were added; but now this lethal aerosol spraying covers the entire globe. The popular term for these aerosols is Chemtrails. Www.youtube.com/watch? This aerosol spraying is not the first time Americans have been used as un-informed experimental laboratory animals. Here are just two examples of what has been done to us, and what continues without any informed consent. The gas used, on probably millions of the unsuspecting riders, was not “harmless.”

Terence McKenna - Culture Is Not Your Friend. Terence Mckenna - Trust Yourself.