Zone. A Softer World: 276. NeatSites! Timekiller.com >> Got something better to do? Mytopia. Sick Joke Wiki - Sickipedia. Prostitutes of 1912. These pictures, taken in 1912, show the prostitutes of New Orleans. 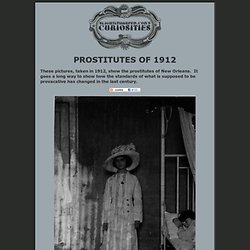 It goes a long way to show how the standards of what is supposed to be provacative has changed in the last century. Topix. 17 Web Toys for Your Procrastination Pleasure. Sometimes you need to take a break from work and just veg out by doing something mindless and pleasant. 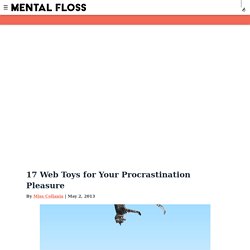 TV or a game of solitaire is good for that, but both require a set time commitment. There are hundreds of alternatives on the internet in the form of web toys. These are sites that offer strange visuals, often interactive visuals, that require no real mental effort but might bring a smile to your face for a while. 1. Spider Vector Park has some great toys and games, some of which are harder to figure out than others. 2. Ooh, cosmic! 3. Staggering Beauty is a web page that comes with an epilepsy warning. 4. Silk is an interactive drawing program (with music) in which you weave patterns of silky wisps of smoke across the screen to create horizontally-mirrored art. 5.

Sometimes you'd like to draw with many lines at the same time. 6. Have you ever made colored sand sculptures in a glass jar? RGB is pretty simple. 8. Cat Bounce shows you bouncing cats. The Curious Brain. Neatorama. The following is an article from The Annals of Improbable Research. 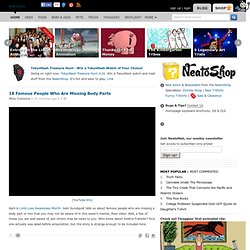 . (1. This author has willingly withdrawn from the list of authors. In multiauthored papers the issue of sequence in the name of authors makes a posteriori assessment of their relative contribution difficult (Bennett and Taylor, 2003; Bhandari et al., 2003). Interesting. Cadaver. The American Indian Souvenir Playing Cards, ca. 1900. “Fifty-three of the best photographs of the homes and faces of the Pueblo Indians, taken in the last few years by A. 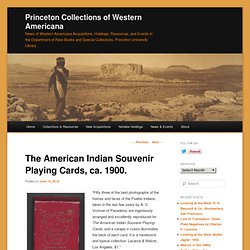 C. Vroman of Pasadena, are ingeniously arranged and excellently reproduced for The American Indian Souvenir Playing-Cards; and a zarape in colors illuminates the back of each card. It is a handsome and typical collection. Lazarus & Melzer, Los Angeles, $1.” –Advertisement from The Land of Sunshine: The Magazine of California and the West (Volume XIII, June-December, 1900). Thanks to a gift of Donald Farren ’58, the department recently acquired two sets of souvenir playing cards illustrated with half-tone reproductions of photographs taken by noted photographer of the Southwest, A. Sistine Chapel. Russia meteor virtually impossible to see coming. Scientists have begun piecing together the characteristics of the meteor that exploded over Russia on the morning of February 15, using data from seismic instruments that track earthquakes and microphones designed to detect sonic booms from nuclear explosions. 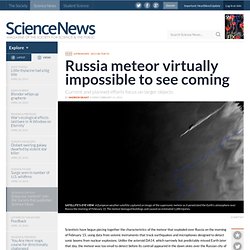 Unlike the asteroid DA14, which narrowly but predictably missed Earth later that day, the meteor was too small to detect before its contrail appeared in the dawn skies over the Russian city of Chelyabinsk. Yet even an object too small to detect can produce an impressive amount of destruction. The meteor was 15 meters across (compared with 50 meters for 2012 DA14) and weighed more than 7,000 metric tons when it entered Earth’s atmosphere, says Margaret Campbell-Brown, an astronomer at Western University in London, Ontario. Coincidentally, the largest observed meteor to enter the atmosphere since 1908 arrived just hours before a much larger object passed the planet uneventfully at a distance of about 27,000 kilometers. Line. Esoteric Archives. Criss Angel ∞ The Official Website.