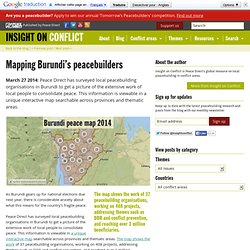 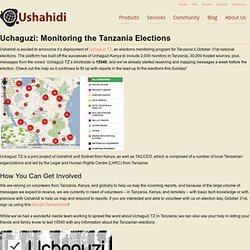 The platform has built off the successes of Uchaguzi Kenya to include 2,000 monitors in Tanzania, 30,000 trusted sources, plus messages from the crowd. Uchaguzi Kenya 2013 Launched. As you approach a major milestone in life someone usually asks, “What would you have done differently if you knew then what you know today?” 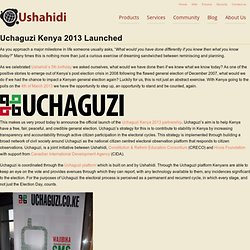 Many times this is nothing more than just a curious exercise of dreaming sandwiched between reminiscing and planning. As we celebrated Ushahidi’s 5th birthday we asked ourselves, what would we have done then if we knew what we know today? As one of the positive stories to emerge out of Kenya’s post election crisis in 2008 following the flawed general election of December 2007, what would we do if we had the chance to impact a Kenyan general election again? Crisis Mapping Sudan: Protest Map of Khartoum. Syria Tracker. Frontlinesmsplateaustate.crowdmap. Early warning and early response for peacebuilding in Nigeria. May 16 2014: Michael Sodipo, Insight on Conflict's Local Correspondent for Nigeria, looks at why early warning and early response systems are such important toots for conflict prevention, and how such mechanisms are being implemented in Nigeria. 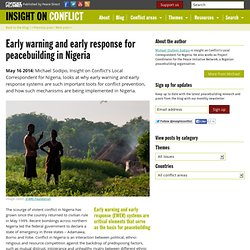 Early warning and early response (EWER) systems are critical elements that serve as the basis for peacebuilding The scourge of violent conflict in Nigeria has grown since the country returned to civilian rule in May 1999. Recent bombings across northern Nigeria led the federal government to declare a state of emergency in three states – Adamawa, Borno and Yobe. 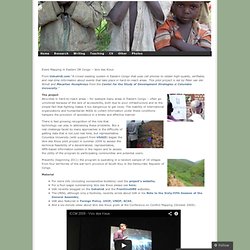 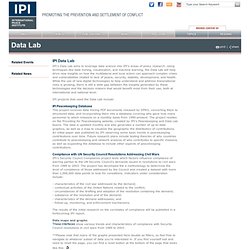 Using techniques like data mining, visualization, and machine learning, the Data Lab will help drive new insights on how the multilateral and local actors can approach complex crises and vulnerabilities related to lack of peace, security, stability, development, and health. While the use of new digital technologies to help understand and address transnational risks is growing, there is still a wide gap between the insights generated by these technologies and the decision makers that would benefit most from their use, both at international and national level. 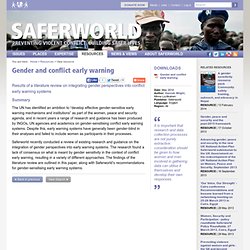 Despite this, early warning systems have generally been gender-blind in their analyses and failed to include women as participants in their processes. Fostering Human Security, Peace, and Justice. Innovating civic media tools and practices together with communities. Instituto Igarapé. Senate Confirms Author Of Drone Memo To Federal Bench. Hide captionThis May 20, 2013, file photo shows Harvard Law Professor David Barron during a forum at the John F. 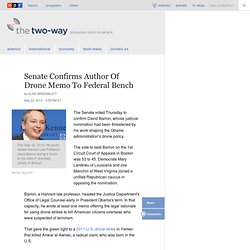 Kennedy Library in Boston. Michael Dwyer/AP This May 20, 2013, file photo shows Harvard Law Professor David Barron during a forum at the John F. Kennedy Library in Boston. The Senate voted Thursday to confirm David Barron, whose judicial nomination had been threatened by his work shaping the Obama administration's drone policy. The vote to seat Barron on the 1st Circuit Court of Appeals in Boston was 53 to 45. Barron, a Harvard law professor, headed the Justice Department's Office of Legal Counsel early in President Obama's term.

That gave the green light to a 2011 U.S. drone strike in Yemen that killed Anwar al-Awlaki, a radical cleric who was born in the U.S. Apple Patents Built-In Automated Emergency Detection And Assistance For iPhone. A new patent application by Apple just published by the USPTO (via AppleInsider) adds a feature to an iPhone that may not be as cool as an optical heart rate sensor, but could be just as (or more) life-saving: the new tech would use data from onboard sensor to automatically detect when a user is subject to physical attack, including car crashes and violent personal altercations, as well as sudden medical emergencies. 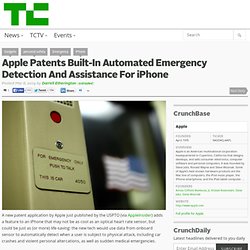 Once the iPhone uses information from those sensors, which include contact detection to determine if someone is suddenly separated from their device in the middle of an interaction, or if a user doesn’t move for an extended period of time in unusual circumstances. It could also draw from cues including a device being dropped, headphones being detached, or even auditory cues like a loud noise being picked up by the mic. Said mode would begin a cycle than includes first a warning system designed to counter accidental triggering. Photo courtesy flickr user Mr.TinDC. Can Big Data Save Lives? As the challenges posed by urbanization, globalization, and climate change mount, resilience is becoming a top concern of city governments and citizens alike. 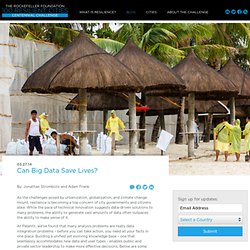 While the pace of technical innovation suggests data-driven solutions to many problems, the ability to generate vast amounts of data often outpaces the ability to make sense of it. At Palantir, we’ve found that many analysis problems are really data integration problems – before you can take action, you need all your facts in one place. Building a unified yet evolving knowledge base – one that seamlessly accommodates new data and user types - enables public and private sector leadership to make more effective decisions.