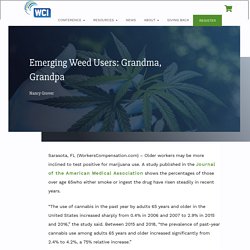 A study published in the Journal of the American Medical Association shows the percentages of those over age 65who either smoke or ingest the drug have risen steadily in recent years. “The use of cannabis in the past year by adults 65 years and older in the United States increased sharply from 0.4% in 2006 and 2007 to 2.9% in 2015 and 2016,” the study said. Between 2015 and 2018, “the prevalence of past-year cannabis use among adults 65 years and older increased significantly from 2.4% to 4.2%, a 75% relative increase.” Researchers out of New York University’s School of Global Public Health analyzed data from 14,896 respondents to the 2015-2018 National Survey on Drug Use and Health. Use of cannabis was determined by asking about marijuana, hashish, pot, grass, and hash oil that was either smoked or ingested. 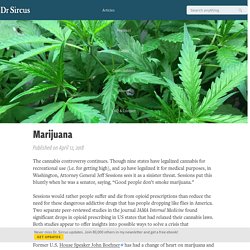 Though nine states have legalized cannabis for recreational use (i.e. for getting high), and 29 have legalized it for medical purposes, in Washington, Attorney General Jeff Sessions sees it as a sinister threat. Sessions put this bluntly when he was a senator, saying, “Good people don’t smoke marijuana.” Trump overrules Sessions: DOJ won't target marijuana in states like Colorado where the drug is legal. How did this shift come about? 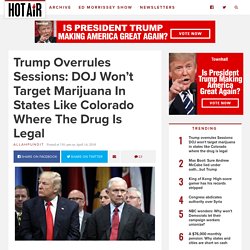 Was Trump persuaded on the federalist merits of letting states take the lead on setting marijuana policy? Or did Cory Gardner’s hardball tactics of blockading Senate confirmation of DOJ nominees until the White House reversed itself win the day? See Also: Congress abdicates authority over Syria Or … did POTUS realize that few things would piss off his least favorite cabinet nominee more than easing off the war on weed? If so, border hawks should start urging Sessions to take a strong “please don’t build the wall” line in public. To be fair to Sessions, his determination to enforce federal pot laws in states where it’s legal has been overstated. Marijuana may be a miracle treatment for children with autism. Leigh University in Bethlehem, PA, is preparing to study the effects of cannabis as a treatment for children’s autism. 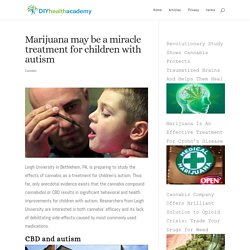 Thus far, only anecdotal evidence exists that the cannabis compound cannabidiol or CBD results in significant behavioral and health improvements for children with autism. Researchers from Leigh University are interested in both cannabis’ efficacy and its lack of debilitating side-effects caused by most commonly used medications. CBD and autism Stories of parents who are successfully treating their kids’ autism with cannabis oil are popping up everywhere. CBD seems to have a particularly amazing impact by reducing the hypersensitivity, hyperactivity, and instances of self-harm while improving the communication barriers associated with the disorder. Cannabinoids For Cancer Treatment, Journal Supports Changing Federal Schedule. A review bemoans the federal classification of cannabis as illicit drugs, because of its potential anti-cancer benefits When cannabinoids such as those found in marijuana and hemp activate signaling pathways in cancer cells, they can stimulate a cell death, called apoptosis. 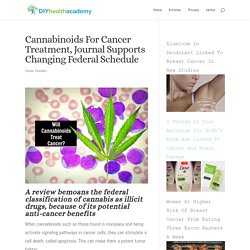 This can make them a potent tumor fighter. Cannabinoids have shown strong activity against human tumor tissue grown in animals, but haven’t really gone through as much human testing as you might think. Benefits Without The Buzz: Juicing Cannabis For Health. It’s no secret that cannabis has medicinal properties and that you can smoke it, eat it, drink it as tea, and make tinctures with it, but did you know you can juice it? 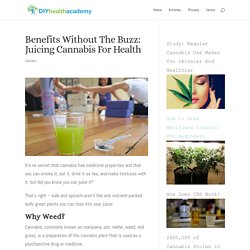 That’s right – kale and spinach aren’t the only nutrient-packed leafy green plants you can toss into your juicer. Why Weed? Cannabis, commonly known as marijuana, pot, reefer, weed, and grass, is a preparation of the cannabis plant that is used as a psychoactive drug or medicine. The earliest recorded uses date from the 3rd millennium BC. Despite its long history of use as a natural medicine, since the early 20th century cannabis has been subject to legal restrictions. Can marijuana help heal broken bones? Even though the U.S. government portrays cannabis as a dangerous drug, this herb has been used as a medicine for thousands of years to improve people’s physical and mental health. 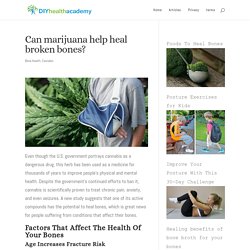 Despite the government’s continued efforts to ban it, cannabis is scientifically proven to treat chronic pain, anxiety, and even seizures. A new study suggests that one of its active compounds has the potential to heal bones, which is great news for people suffering from conditions that affect their bones. How Does CBD Work? CBD is an anti-inflammatory that can help with seizures, joint pain and many other health problems. 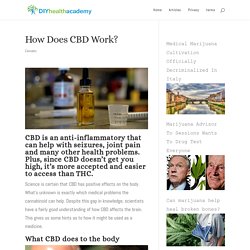 Plus, since CBD doesn’t get you high, it’s more accepted and easier to access than THC. Science is certain that CBD has positive effects on the body. What’s unknown is exactly which medical problems the cannabinoid can help. Despite this gap in knowledge, scientists have a fairly good understanding of how CBD affects the brain.

9 ways to use CBD products to improve your life. Cannabidiol (CBD) is all the rage in alternative treatment, and tons of people are using CBD products as an alternative to prescription medications and over-the-counter (OTC) drugs. 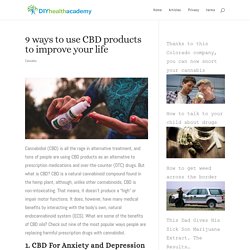 But what is CBD? CBD is a natural cannabinoid compound found in the hemp plant, although, unlike other cannabinoids, CBD is non-intoxicating. That means, it doesn’t produce a “high” or impair motor functions. 5 Non-Marijuana Plants That Also Contain Healing Cannabinoids. Cannabis has been used from many years, both recreationally and medically. 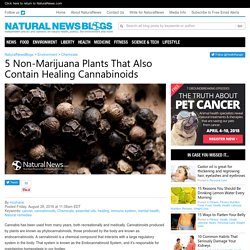 Cannabinoids produced by plants are known as phytocannabinoids, those produced by the body are known as endocannabinoids. A cannabinoid is a chemical compound that interacts with a large regulatory system in the body. That system is known as the Endocannabinoid System, and it’s responsible for maintaining homeostasis in our bodies. Homeostasis is the perfect internal balance required for optimum health. Cannabis over chemo: Woman says Cannabis oil cured her aggressive breast cancer in 5 months. Cannabis proven an effective alternative form of pain relief for elderly patients, allowing many to quit taking dangerous meds, research finds.

(Natural News) President Trump announced last year that the opioid epidemic was a “public health emergency” and called for the medical community to look for alternative therapies to battle the growing crisis. The President cited the most recent Centers for Disease Control and Prevention (CDC) statistics which places drug overdose as the leading cause of injury death in the United States, outnumbering both gun-related deaths and traffic crashes. It is estimated that 175 people die each day in our country because of a drug overdose. Study: Cannabis is Protective Against Alcoholic Liver Disease. By Paul Fassa Health Impact News The most recent study of cannabis’ protection against fatty liver disease was reported in the journal Liver International on January 18, 2018, with the title “Cannabis use is associated with reduced prevalence of progressive stages of alcoholic liver disease”[ALD]. The study was a cooperative endeavor involving several medical schools in New York, New Jersey, Massachusetts, and Johns Hopkins in Maryland.

The researchers used data from the Healthcare Cost and Utilization Project. They found 319,514 ALD cases aged 18 or over, and broke this massive number into four progressed phases of ALD (alcohol liver disease) and three cannabis groups according to exposure frequency, which revealed 90.39 percent didn’t use cannabis; 8.26 percent were non-dependent cannabis users, and 1.36 percent were dependent cannabis users. 5 Best Marijuana Strains for Cancer Relief [2018 Update] Cancer is a complex and heavily researched medical disease that we still have very few answers about, as well as no official cure, but in recent times, multiple cannabis studies across the globe have discovered just how many healing benefits medical marijuana can provide for patients of cancer, especially regarding some symptoms from conventional cancer treatments.

Did you know that in 2014 alone, there were a little less than 15 million people living with some type of cancer within the United States according to the National Cancer Institute? As we take a look at a worldwide survey, the National Cancer Institute expresses that when observing data from 2012-2014, 38.5% of men and women will, at some point in their life, be diagnosed with some form of cancer. Munchy madness: Girl Scout sells 300 boxes of cookies outside San Diego marijuana dispensary — RT US News. A young San Diego girl has found a novel way of bolstering sales of her Girl Scout Cookies – selling them outside a local marijuana dispensary. The Urbn Leaf center posted a picture of the innovative Girl Scout outside its store in the Mission Bay area of the city Friday. The cheeky post calls on customers to pick up some of the treats when they buy ‘GSC,’ a type of marijuana product flavoured like Girl Scout Cookies.

Can CBD Help Those Addicted to Pain Medications? - ECHO Connection. The United States is currently facing an overwhelming opioid epidemic. Doctors commonly prescribe opioid painkillers to patients who are suffering from severe and chronic pain. The medications attach to opioid receptors on nerve cells, effectively blocking pain. Unfortunately, opioids also carry a high risk of addiction and abuse, and according to the U.S. Department of Health & Human Services, opioid overdose claim the lives of 78 Americans single everyday.

Findings in a new study suggest that cannabidiol (CBD), a natural non-psychoactive cannabinoid, may be able to help those who have become dependent on opioids. After examining previous research, Yasmin L. How Cannabinoids and the Endocannabinoid System Manage the Pain Response - ECHO Connection. We’ve regularly discussed the body’s endocannabinoid system and its responsibility in regulating an array of physiological processes to encourage homeostasis. One of the processes the endocannabinoid system is tasked with managing is the presence and intensity of pain. Often felt as a sting, ache, tingle, prick, or burn, pain is classified as either acute or chronic. Acute pain is the discomfort that comes on suddenly following an injury or trauma, or damage to tissue caused by a disease.

Chronic pain is the discomfort that accommodates chronic diseases. The Endocannabinoid System’s Role in the Pain Response The endocannabinoid system is a signaling network made up of cannabinoid receptors (CB1 and CB2) and endogenous ligands called cannabinoids. Cannabinoids, synthesized in the body on demand, act upon the cannabinoid receptors found throughout the central and peripheral nervous systems to either stimulate or inhibit pain signals. Study Finds Cannabinoids May Help Ease Nerve Pain - ECHO Connection. A new study commissioned by the U.S. Department of Veterans Affairs (VA) has found evidence that cannabinoids may be effective for reducing neuropathic pain. A team of 11 researchers from the VA Portland Health Care System and Oregon Health and Science University reviewed the findings of 27 previously published studies that investigated cannabinoids and chronic pain in adults.

Nerve pain, also referred to as neuropathy, can be caused by a number of conditions or even have mysterious origins. Damage to the nerves in the brain and spinal cord cause a discomfort that is commonly associated with weakness or numbness. After reviewing the studies, the researchers found “low strength” evidence that cannabinoids can help alleviate nerve pain. Dr. The findings in previous studies also indicate efficacy of cannabinoids for chronic pain. 5 Ways CBD May Be Able to Complement Chemotherapy Treatments - ECHO Connection. Those undergoing chemotherapy treatments for cancer can experience uncomfortable and sometimes debilitating side effects. Chemotherapy – or “chemo” — is a category of intravenously administered medicines or drugs that are designed to attack rapidly growing cancer cells. The drugs are very strong, and they kill any cell growing fast, even healthy ones.