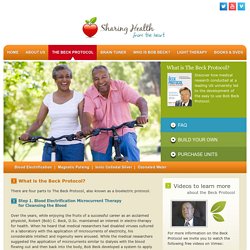 There are four parts to The Beck Protocol, also known as a bioelectric protocol. Step 1. Blood Electrification Microcurrent Therapy for Cleansing the Blood Over the years, while enjoying the fruits of a successful career as an acclaimed physicist, Robert (Bob) C. Step 2. Bob Beck realized that the blood might be cleared of viruses or other pathogens by applying microcurrents, but these same pathogens could be temporarily hiding in the lymph system. Step 3. Bob explains how he awoke at 4:00 a.m. one morning with a sudden insight. Step 4. By this time, Bob Beck was on the lecture circuit at health shows to make his discoveries known. "Now we have a third approach, or fourth, drinking Ozonized Water. O3 rapidly converts (oxidizes) … wastes long present in the body to H2O and CO2 which flush out easily and rapidly. The Bob Beck Brain Tuner and Bio Tuner. Electricity for Health got its start during the days of the Roman Empire when Greek physicians had their patients stand on electric torpedo fish as a step to improve health in the first century AD. 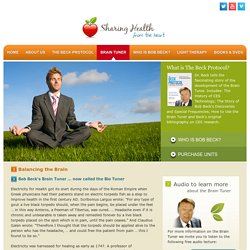 Scribonius Largus wrote: "For any type of gout a live black torpedo should, when the pain begins, be placed under the feet … in this way Anteros, a freeman of Tiberius, was cured. … Headache even if it is chronic and unbearable is taken away and remedied forever by a live black torpedo placed on the spot which is in pain, until the pain ceases.

" And Claudius Galen wrote: "Therefore I thought that the torpedo should be applied alive to the person who has the headache, … and could free the patient from pain … this I found to be so. " Electricity was harnessed for healing as early as 1747. A professor of experimental philosophy and mathematics in Geneva restored life to the paralyzed arm of a blacksmith using an electric current. Robert (Bob) C. Super–Learning 2000 Mega Brain Power Energy Medicine. About Bob Beck: The Inventor of the Beck Protocol. Some individuals stand out because of their passion for research and their ability to bring their findings to the world. 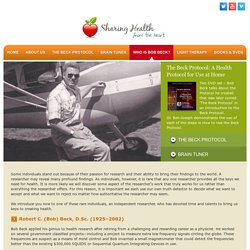 A researcher may reveal many profound findings. As individuals, however, it is rare that any one researcher provides all the keys we need for health. It is more likely we will discover some aspect of the researcher's work that truly works for us rather than everything the researcher offers. For this reason, it is important we each use our own truth detector to decide what we want to accept and what we want to reject no matter how authoritative the researcher may seem. We introduce you now to one of these rare individuals, an independent researcher, who has devoted time and talents to bring us keys to creating health. Robert C. Bob Beck applied his genius to health research after retiring from a challenging and rewarding career as a physicist. Bob Beck's unusual intelligence was evident from an early age.

The LightWorks: An LED and Infrared Light Unit. Light Therapy Bob Beck was truly a Renaissance man as he was knowledgeable about so many health therapies and sometimes had personal correspondence with leading researchers. 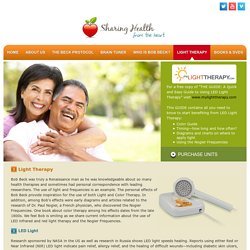 The use of light and frequencies is an example. The personal effects of Bob Beck provide inspiration for the use of both Light and Color Therapy. In addition, among Bob's effects were early diagrams and articles related to the research of Dr. Paul Nogier, a French physician, who discovered the Nogier Frequencies. LED Light. Nogier Frequencies Information. The late French neurologist, Dr. 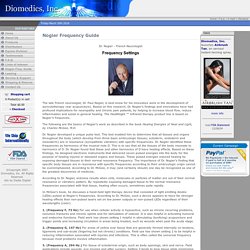 Paul Nogier, is best know for his innovative work in the development of auriculotherapy (ear acupuncture). Based on this research, Dr. Nogier's findings and innovations have had profound implications for neuropathy and chronic pain patients, by helping to increase blood flow, reduce inflammation and assist in general healing. 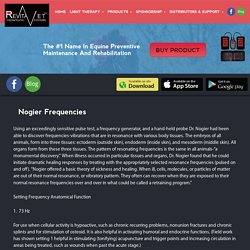 Nogier had been able to discover frequencies-vibrations-that are in resonance with various body tissues. The embryos of all animals, form into three tissues: ectoderm (outside skin), endoderm (inside skin), and mesoderm (middle skin). All organs form from these three tissues. The pattern of resonating frequencies is the same in all animals-“a monumental discovery.” When illness occurred in particular tissues and organs, Dr. Setting Frequency Anatomical Function 1. 73 Hz For use when cellular activity is hypoactive, such as chronic recurring problems, nonunion fractures and chronic splints and for stimulation of osteoid. 2. 146 Hz Used for areas of yellow scar tissue that are generally formed internally on tendons, ligaments and sub-acute (lingering but chronic) conditions. What is auricular acupuncture. 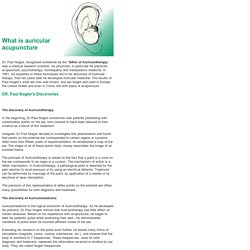 Paul Nogier, recognised worldwide as the “father of Auriculotherapy,” was a medical research scientist. As physician, in particular he practiced acupuncture, psychotherapy, homeopathy and manipulative medicine. In 1951, his expertise in these techniques led to his discovery of Auricular therapy, then ten years later he developed Auricular medicine. The results of Paul Nogier's work are now well known, and are taught and used in Europe, the United States and even in China, the birth place of acupuncture.