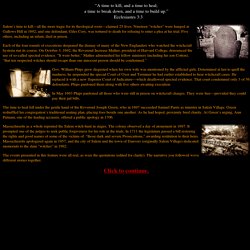 Nineteen “witches” were hanged at Gallows Hill in 1692, and one defendant, Giles Cory, was tortured to death for refusing to enter a plea at his trial. Five others, including an infant, died in prison. Each of the four rounds of executions deepened the dismay of many of the New Englanders who watched the witchcraft hysteria run its course. On October 3, 1692, the Reverend Increase Mather, president of Harvard College, denounced the use of so-called spectral evidence. “It were better,” Mather admonished his fellow ministers (including his son Cotton), “that ten suspected witches should escape than one innocent person should be condemned.”

Gov. In May 1693 Phips pardoned all those who were still in prison on witchcraft charges. The time to heal fell under the gentle hand of the Reverend Joseph Green, who in 1697 succeeded Samuel Parris as minister in Salem Village. Click to continue. Halloween Shines Light on Witchcraft Today. Brian Handwerk for National Geographic News October 28, 2002 Fillet of a fenny snake, In the caldron boil and bake: Eye of newt, and toe of frog, Wool of bat, and tongue of dog, Adder's fork, and blind-worm's sting, Lizard's leg, and howlet's wing, For a charm of powerful trouble; Like a hell-broth boil and bubble. 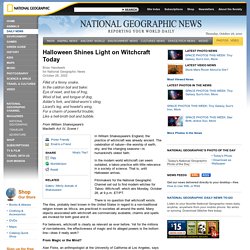 From William Shakespeare's Macbeth Act IV, Scene I. Why Do We Believe in Witchcraft and Magic? - Softpedia. A basic human need You may have met people wasting a fortune on going to mediums with the purpose of high-lightening their ways towards happiness and finding the ideal mate. 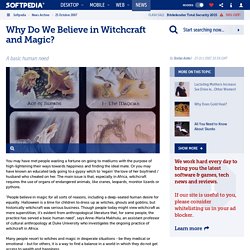 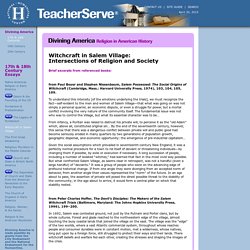 To understand this intensity [of the emotions underlying the trials], we must recognize the fact—self-evident to the men and women of Salem Village—that what was going on was not simply a personal quarrel, an economic dispute, or even a struggle for power, but a mortal conflict involving the very nature of the community itself. The fundamental issue was not who was to control the Village, but what its essential character was to be… Given the social assumptions which prevailed in seventeenth-century New England, it was a perfectly normal procedure for a town to rid itself of deviant or threatening individuals—by changing them if possible, by exile or execution if necessary. From John P. From Carol F. From David D.

Woman suspected of witchcraft burned alive. (CNN) -- A woman in rural Papua New Guinea was bound and gagged, tied to a log and set ablaze on a pile of tires this week, possibly because villagers suspected her of being a witch, police said Thursday. 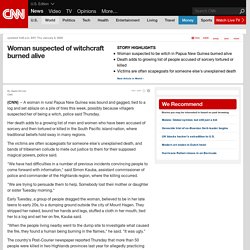 Her death adds to a growing list of men and women who have been accused of sorcery and then tortured or killed in the South Pacific island nation, where traditional beliefs hold sway in many regions. The victims are often scapegoats for someone else's unexplained death, and bands of tribesmen collude to mete out justice to them for their supposed magical powers, police said. "We have had difficulties in a number of previous incidents convincing people to come forward with information," said Simon Kauba, assistant commissioner of police and commander of the Highlands region, where the killing occurred. "We are trying to persuade them to help. Somebody lost their mother or daughter or sister Tuesday morning. " She and the baby survived, according to media reports. Witchcraft, Wicca. This is an archived entry. 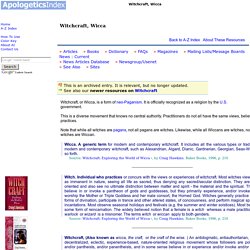 It is relevant, but no longer updated. See also our newer resources on Witchcraft Witchcraft, or Wicca, is a form of neo-Paganism. It is officially recognized as a religion by the U.S. government. This is a diverse movement that knows no central authority. How Witchcraft Works - HowStuffWorks. Maybe you've read all of the Harry Potter books and watched every episode of Charmed or Bewitched, so you think you know what witches are all about. 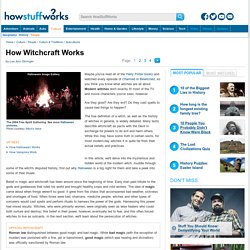 Modern witches don't exactly fit most of the TV and movie characters you've seen, however. Are they good? Are they evil? Do they cast spells to cause bad things to happen? They Called It Witchcraft. ITHACA, N.Y.— In 17th-century New England, almost everyone believed in witches. 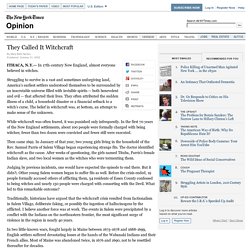 Struggling to survive in a vast and sometimes unforgiving land, America's earliest settlers understood themselves to be surrounded by an inscrutable universe filled with invisible spirits -- both benevolent and evil -- that affected their lives. They often attributed the sudden illness of a child, a household disaster or a financial setback to a witch's curse. The belief in witchcraft was, at bottom, an attempt to make sense of the unknown. While witchcraft was often feared, it was punished only infrequently. In the first 70 years of the New England settlements, about 100 people were formally charged with being witches; fewer than two dozen were convicted and fewer still were executed.

Then came 1692. Judging by previous incidents, one would have expected the episode to end there. The key afflicted accusers in the Salem crisis were frontier refugees whose families had been wiped out in the wars. Witchcraft - Credo Reference - Credo Reference. Witchcraft. (2006). 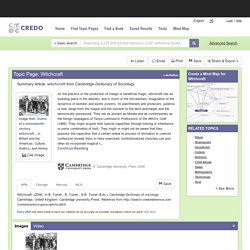 What Is Witchcraft? By Amina Sharma. 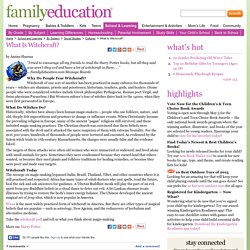 WITCHCRAFT IN AFRICA AND ASIA. Witchcraft Sponsored link. Confusing terminology: In that part of Africa south of the Sahara desert, and in parts of Asia, the terms Witch and Witchcraft have multiple, conflicting, and largely unrelated meanings: The terms Witch and Witchcraft are being used to refer to many unrelated practices throughout Africa and the rest of the world. Confusion reigns. Violence against "Witches" in Africa: FAQs about Wicca/Witchcraft. The Wiccan religion Sponsored link. FAQ's: We receive many E-mails asking about Wicca.

The following are some of the most common questions, with our answers. We will add additional topics as they are raised in future Emails. What is Wicca? Wicca, sometimes called "The Craft" or "The Craft of the Wise" is one of many earth-based religions. Who are the Goddess and God in Wicca? According to David Barrett et al, editors of the "World Christian Encyclopedia: A comparative survey of churches and religions - AD 30 to 2200," there are 19 major world religions which are subdivided into a total of 270 large religious groups, and many tens of thousands of smaller ones. Many Wiccans believe in a deity that is largely unknowable -- sometimes called "The All" or "The One. " How do Wiccans worship the God and Goddess? Some Wiccans pray to their God or Goddess. Is Wicca a form of Satanism? The short answer is "No. " More details. HECATE : Greek goddess of witchcraft, ghosts & magic ; mythology ; pictures : HEKATE.

Witchcraft in Salem. George Jacobs Sr. and his granddaughter Margaret were both accused of witchcraft, but Margaret managed to escape harm by claiming that Grandpa was indeed a witch. He was convicted and hanged in August 1692. Surely the Devil had come to Salem in 1692. Young girls screaming and barking like a dog? Strange dances in the woods?

Witchcraft. Chapter five - Early America by Ilil Arbel, Ph.D. The Colonial experience was entirely different from the European one.