The reality of Voodoo in Benin. As Pope Benedict XVI visits Benin, widely seen as the home of Voodoo, Virgile Ahissou from BBC Afrique explains the reality behind what is often a misunderstood religion. 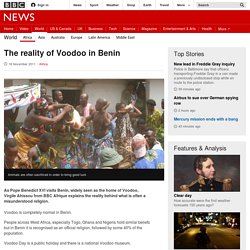 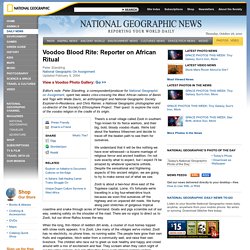 Their quest: to explore the roots of the voodoo religion in the cradle of its origin. There's a small village called Zooti in southern Togo known for its fierce warriors, and their big, bold, bloody voodoo rituals. We're told about the fearless tribesmen and decide to travel off the beaten path to see them for ourselves.

We understand that it will be like nothing we have ever witnessed—a bizarre marriage of religious fervor and ancient tradition. Haitian Voodoo. Inside Voodoo: African Cult of Twins Marks Voodoo New Year. Reporter Lorne Matalon's African assignment was part of the National Geographic Society's ongoing Ethnosphere Project, a five-year series of expeditions to study cultural diversity. 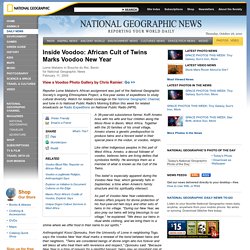 Watch for related coverage on the National Geographic Channel, and tune in to National Public Radio's Morning Edition this week for related broadcasts on Radio Expeditions on National Public Radio (NPR). A 38-year-old subsistence farmer, Koffi Ameko lives with his wife and four children along the Mono River in Benin, West Africa. Voodoo. Voodoo. Voodoo (also spelled Vodou and Vodun) gave Haiti a reputation for sorcery and zombies. 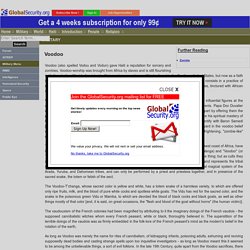 Voodoo-worship was brought from Africa by slaves and is still flourishing in Haiti and other West Indian islands. Not very long ago, it was still to be found in the Southern United States, but now as a faith it is practically dead. It has left, however, many superstitions that are to this day current. Voodoo's spell over Haiti. The drumming and chanting goes on hour after hour. 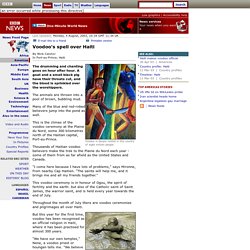 A goat and a small black pig have their throats cut, and the blood is sprinkled over the worshippers. The animals are thrown into a pool of brown, bubbling mud. Many of the blue and red-robed believers jump into the pond as well. Voodoo and West Africa's Spiritual Life. The traditional religion of Vodun (Voodoo) in Haiti. Hartford Web Publishing is not the author of the documents in World History Archives and does not presume to validate their accuracy or authenticity nor to release their copyright. 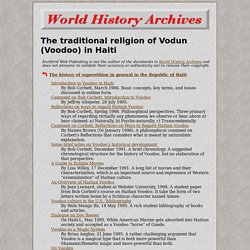 The history of superstition in general in the Republic of Haiti Introduction to Voodoo in Haiti By Bob Corbett, March 1988. Voodoo Blood Rite: Reporter on African Ritual. African Voodoo. Voodoo originated in the African kingdoms of Fon and Kongo as many as 6,000 years ago. 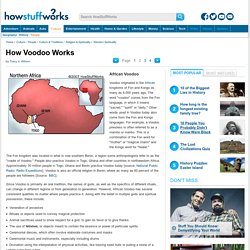 The word "voodoo" comes from the Fon language, in which it means "sacred," "spirit" or "deity. " Other words used in Voodoo today also come from the Fon and Kongo languages. Bob Corbett, Introduction to Voodoo. Note of July 16, 1995. 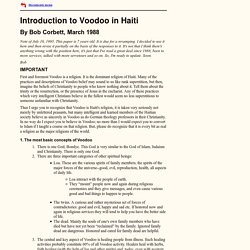 This paper is 7 years old. It is due for a revamping. I decided to use it here and then revise it partially on the basis of the responses to it. It's not that I think there's anything wrong with the position here, it's just that I've read a great deal since 1988, been to more services, talked with more serveteurs and so on. So, I'm ready to update. Bob. Haiti: Possessed by Voodoo. July 7, 2004 The ceremony begins with a Roman Catholic prayer. 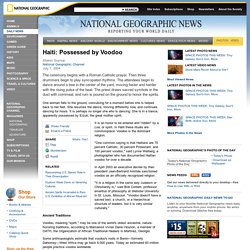 Then three drummers begin to play syncopated rhythms. The attendees begin to dance around a tree in the center of the yard, moving faster and harder with the rising pulse of the beat. The priest draws sacred symbols in the dust with cornmeal, and rum is poured on the ground to honor the spirits. One woman falls to the ground, convulsing for a moment before she is helped back to her feet. It is an honor to be entered and "ridden" by a Loa, or spirit. "One common saying is that Haitians are 70 percent Catholic, 30 percent Protestant, and 100 percent voodoo," said Lynne Warberg, a photographer who has documented Haitian voodoo for over a decade. In April 2003 an executive decree by then president Jean-Bertrand Aristide sanctioned voodoo as an officially recognized religion. "It is a religion in the same way Judaism or Christianity is," said Bob Corbett, professor emeritus of philosophy at Webster University in St. 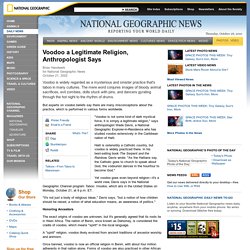 VODUN (and related religions: Candomble, Lucumi, Macumba, Voodoo, Vodoun, & Yoruba) Religions of the world Sponsored link Vodun is sometimes called Voodoo, Vodoun, Vodou. Religions related to Vodun are: Candomble, Lucumi, Macumba, and Yoruba) General background: Vodun (a.k.a. Vodun was actively suppressed during colonial times. "Many Priests were either killed or imprisoned, and their shrines destroyed, because of the threat they posed to Euro-Christian/Muslim dominion. Vodun has been freely practiced in Benin since a democratic government was installed there in 1989; about 60% of the population follows this religion. Today over 60 million people practice Vodun worldwide.