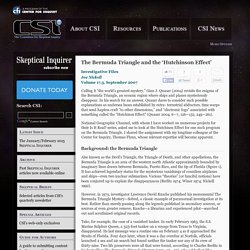 Quasar (2004) revisits the enigma of the Bermuda Triangle, an oceanic region where ships and planes mysteriously disappear. In his search for an answer, Quasar dares to consider such possible explanations as undersea bases established by extra- terrestrial abductors, time warps that send hapless craft “to other dimensions,” and “electronic fogs” associated with something called the “Hutchison Effect” (Quasar 2004, 6—7, 126—132, 249—261). National Geographic Channel, with whom I have worked on numerous projects for their Is It Real? Mystery of Bermuda Triangle Remains One. MIAMI, June 4— Just as the skeptics were about to claim a logical explanation, the legend of the Bermuda Triangle today was declared to be alive and well and vexing off the coast of South Florida. 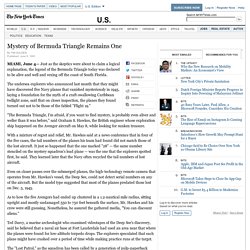 The undersea explorers who announced last month that they might have discovered five Navy planes that vanished mysteriously in 1945, laying a foundation for the myth of a craft-swallowing Caribbean twilight zone, said that on closer inspection, the planes they found turned out not to be those of the fabled "Flight 19. " "The Bermuda Triangle, I'm afraid, if you want to find mystery, is probably even aliver and weller than it was before," said Graham S. Hawkes, the British engineer whose exploration ship happened on the Avenger aircraft on May 8, while looking for sunken treasure. With a mixture of regret and relief, Mr. Six Mysteries of the Bermuda Triangle. Miami, Puerto Rico and Bermuda are separately some of the most sought-after vacation spots in the world. 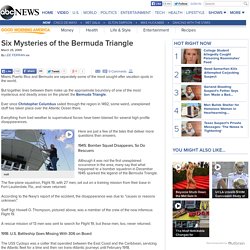 But together, lines between them make up the approximate boundary of one of the most mysterious and deadly areas on the planet: the Bermuda Triangle. Ever since Christopher Columbus sailed through the region in 1492, some weird, unexplained stuff has taken place over the Atlantic Ocean there. Everything from bad weather to supernatural forces have been blamed for several high profile disappearances. null Here are just a few of the tales that deliver more questions than answers. 1945: Bomber Squad Disappears, So Do Rescuers Although it was not the first unexplained occurrence in the area, many say that what happened to a bomber squadron in December 1945 sparked the legend of the Bermuda Triangle.

The five-plane squadron, Flight 19, with 27 men, set out on a training mission from their base in Fort Lauderdale, Fla., and never returned. Staff Sgt. 1918: U.S. 7 Disappearances in the Bermuda Triangle. The U.S.S. Cyclops and U.S. Navy Avengers. Many Bermuda Triangle Web sites include long lists of missing ships and planes. 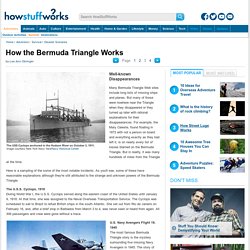 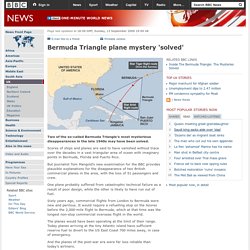 Scores of ships and planes are said to have vanished without trace over the decades in a vast triangular area of ocean with imaginary points in Bermuda, Florida and Puerto Rico. But journalist Tom Mangold's new examination for the BBC provides plausible explanations for the disappearance of two British commercial planes in the area, with the loss of 51 passengers and crew. One plane probably suffered from catastrophic technical failure as a result of poor design, while the other is likely to have run out of fuel. Sixty years ago, commercial flights from London to Bermuda were new and perilous. Exorcizing the Devil's Triangle. Sealift no. 6 (Jun. 1974): 11-15. 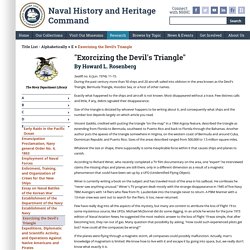 During the past century more than 50 ships and 20 aircraft sailed into oblivion in the area known as the Devil's Triangle, Bermuda Triangle, Hoodoo Sea, or a host of other names. Exactly what happened to the ships and aircraft is not known. Most disappeared without a trace. Few distress calls and little, if any, debris signaled their disappearance. Size of the triangle is dictated by whoever happens to be writing about it, and consequently what ships and the number lost depends largely on which article you read. Vincent Gaddis, credited with putting the triangle "on the map" in a 1964 Argosy feature, described the triangle as extending from Florida to Bermuda, southwest to Puerto Rico and back to Florida through the Bahamas.

Whatever the size or shape, there supposedly is some inexplicable force within it that causes ships and planes to vanish. Bermuda Triangle: About the Devil's Triangle. How the Bermuda Triangle Works. You won't find it on any official map and you won't know when you cross the line, but according to some people, the Bermuda Triangle is a very real place where dozen of ships, planes and people have disappeared with no good explanation. 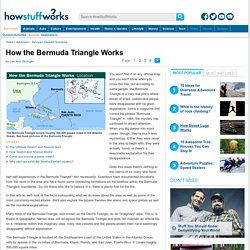 Since a magazine first coined the phrase "Bermuda Triangle" in 1964, the mystery has continued to attract attention. When you dig deeper into most cases, though, they're much less mysterious. Either they were never in the area to begin with, they were actually found, or there's a reasonable explanation for their disappearance.

Bermuda Triangle: Behind the Intrigue. Hillary Mayell for National Geographic News Updated December 15, 2003 On a sunny day 58 years ago, five Navy planes took off from their base in Florida on a routine training mission, known as Flight 19. 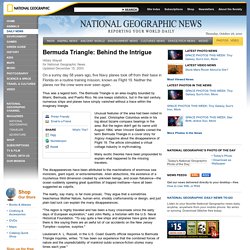 Neither the planes nor the crew were ever seen again. Thus was a legend born.