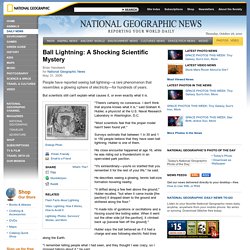 But scientists still can't explain what causes it, or even exactly what it is. "There's certainly no consensus. I don't think that anyone knows what it is," said Graham K. Hubler, a physicist at the U.S. "Most scientists feel that the proper model hasn't been found yet. " Surveys estimate that between 1 in 30 and 1 in 150 people believe that they have seen ball lightning.

His close encounter happened at age 16, while he was riding out a thunderstorm in an open-sided park pavilion. "It's extraordinary—you're so startled that you remember it for the rest of your life," he said. He describes seeing a glowing, tennis ball-size formation hovering nearby. "It drifted along a few feet above the ground," Hubler recalled, "but when it came inside [the pavilion] it dropped down to the ground and skittered along the floor. " Scientists accidentally record ball lightning in nature for first time.

Ball lightning, a phenomenon in which a glowing orb of light persists for seconds after a lightning strike, is one of the most enduring atmospheric mysteries in science. 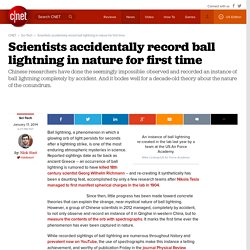 Reported sightings date as far back as ancient Greece -- an occurrence of ball lightning is rumored to have killed 18th century scientist Georg Wilhelm Richmann -- and re-creating it synthetically has been a daunting feat, accomplished by only a few research teams after Nikola Tesla managed to first manifest spherical charges in the lab in 1904. Since then, little progress has been made toward concrete theories that can explain the strange, near-mystical nature of ball lightning. However, a group of Chinese scientists in 2012 managed, completely by accident, to not only observe and record an instance of it in Qinghai in western China, but to measure the contents of the orb with spectrographs.

It marks the first time ever the phenomenon has ever been captured in nature. Study explains the mystery of ball lightning. (Phys.org)—Sightings of ball lightning have been made for centuries around the world – usually the size of a grapefruit and lasting up to twenty seconds – but no explanation of how it occurs has been universally accepted by science. 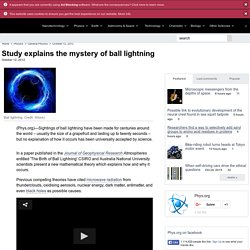 In a paper published in the Journal of Geophysical Research Atmospheres entitled 'The Birth of Ball Lightning' CSIRO and Australia National University scientists present a new mathematical theory which explains how and why it occurs. Previous competing theories have cited microwave radiation from thunderclouds, oxidising aerosols, nuclear energy, dark matter, antimatter, and even black holes as possible causes. Led by CSIRO scientist John Lowke, the new theory focuses on how ball lightning occurs in houses and aeroplanes – and how it can pass through glass. Mystery of Ball Lightning Solved? Ball lightning may be the accumulation of ions on the outside of non-conducting surfaces such as a window. 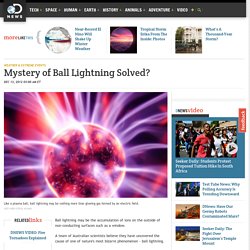 A team of Australian scientists believe they have uncovered the cause of one of nature's most bizarre phenomenon - ball lightning. Ball lightning, typically the size of a grapefruit, is a rarely seen event that lasts up to 20 seconds. "Ball lightning has been reported by hundreds of people ... for hundreds of years and it has been a mystery," says CSIRO scientist John Lowke, lead author of a new study published in the Journal of Geophysical Research Atmospheres. PHOTOS: NASA's Extreme Weather Photo Contest: Winners Previous theories have suggested microwave radiation, oxidizing aerosols, nuclear energy, dark matter, antimatter, and even black holes as possible causes. To unravel the mystery Lowke and colleagues at the CSIRO and the Australian National University turned their attention to reports of ball lightning forming near windows. Recreating it in the lab. First Spectrum of Ball Lightning. Researchers measured a spectrum of light emitted by the rare and elusive ball lightning. 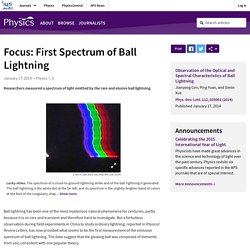 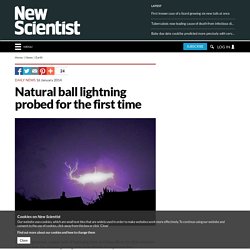 Anecdotes about ball lightning stretch back for centuries, but the phenomenon has been hard to study as the balls are unpredictable – and when they do materialise, they last for mere seconds. Lacking detailed observations, explanations have ranged from electrically charged meteorites to hallucinations induced by magnetism during storms. In 2012, Jianyong Cen and his colleagues at Northwestern Normal University in Lanzhou, China, were observing a thunderstorm in Qinghai, China with video cameras and spectrographs.

Purely by chance, they recorded a ball lightning event. The spectrograph revealed that the main elements in the ball were the same as those found in the soil: silicon, iron and calcium. The study authors say that other mechanisms could also explain their observations. Does ball lightning really exist?" ­When you rub your socked feet on the carpet and zap yourse­lf on a doorknob, you're experiencing static electricity. 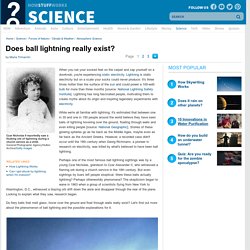 Lightning is static electricity but on a scale your socks could never produce: It's three times hotter than the surface of the sun and could power a 100-watt bulb for more than three months [source: National Lightning Safety Institute]. Lightning has long fascinated people, motivating them to create myths about its origin and inspiring legendary experiments with electricity.

While we're all familiar with lightning, it's estimated that between one in 30 and one in 150 people around the world believe they have seen balls of lightning hovering over the ground, floating through walls and even killing people [source: National Geographic]. Stories of these glowing spheres go as far back as the Middle Ages, maybe even as far back as the Ancient Greeks.

Do fiery balls that melt glass, hover over the ground and float through walls really exist? Does ball lightning really exist?" Scientists capture the first ever footage of ball lightning. Ball lightning is a sphere of electrical light that can appear during a stormResearchers used spectrographs and video cameras to record the elusive sight which lasted two seconds and travelled 15m above the groundThe research also provides the first evidence that the elusive glowing orbs form due to vapourised dirt By Ellie Zolfagharifard Published: 13:07 GMT, 20 January 2014 | Updated: 09:41 GMT, 21 January 2014 It has been mistaken for UFOs, wreaked havoc on homes and eluded rational explanation for centuries. 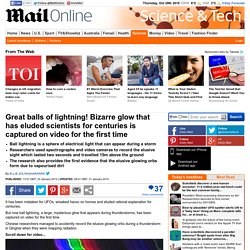 But now ball lightning, a large, mysterious glow that appears during thunderstorms, has been captured on video for the first time. Chinese researchers managed to accidently record the elusive glowing orbs during a thunderstorm in Qinghai when they were mapping radiation. Scroll down for video...