Great Books about Atlantis. The greatest mass of an iceberg lies hidden unseen beneath the surface of the water. 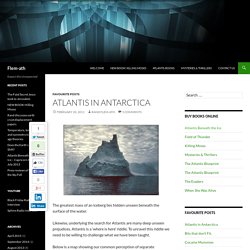 Likewise, underlying the search for Atlantis are many deep unseen prejudices. Atlantis is a ‘where is here’ riddle. To unravel this riddle we need to be willing to challenge what we have been taught. Below is a map showing our common perception of separate continents and oceans. Below is a US Naval projection of the world centered on Antarctica. From a southern perspective we see that our planet has only one ocean. Rand Flem-Ath: Atlantis Under the Ice / Atlantis Blueprint - 04-13-13 WDTRG. Atlantis as Antarctica. Atlantis as Antarctica Ever since the great American horror writer Edgar Allen Poe wrote about a lost city in Antarctica in his `The Narrative of Arthur Gordon Pym', which appeared in 1838, arguments have raged on whether or not this frozen continent once supported human life. 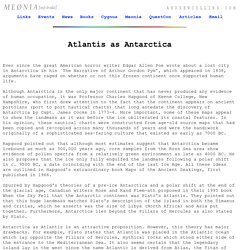 Although Antarctica is the only major continent that has never produced any evidence of human occupation, it was Professor Charles Hapgood of Keene College, New Hampshire, who first drew attention to the fact that the continent appears on ancient portolans (port to port nautical charts) that long antedate the discovery of Antarctica by Capt. James Cooke in 1773-4. More important, some of these maps appear to show the landmass as it was before the ice obliterated its coastal features. Looking for the Lost City of Atlantis. Could the fabled lost city of Atlantis have been located? 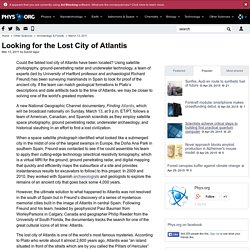 Using satellite photography, ground-penetrating radar and underwater technology, a team of experts (led by University of Hartford professor and archaeologist Richard Freund) has been surveying marshlands in Spain to look for proof of the ancient city. If the team can match geological formations to Plato’s descriptions and date artifacts back to the time of Atlantis, we may be closer to solving one of the world's greatest mysteries. A new National Geographic Channel documentary, Finding Atlantis, which will be broadcast nationally on Sunday, March 13, at 9 p.m. ET/PT, follows a team of American, Canadian, and Spanish scientists as they employ satellite space photography, ground penetrating radar, underwater archaeology, and historical sleuthing in an effort to find a lost civilization. Science.nationalgeographic. If the writing of the ancient Greek philosopher Plato had not contained so much truth about the human condition, his name would have been forgotten centuries ago. 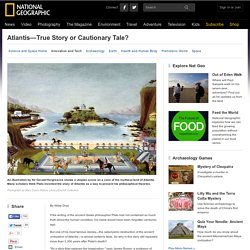 But one of his most famous stories—the cataclysmic destruction of the ancient civilization of Atlantis—is almost certainly false. So why is this story still repeated more than 2,300 years after Plato's death? "It's a story that captures the imagination," says James Romm, a professor of classics at Bard College in Annandale, New York. "It's a great myth. It has a lot of elements that people love to fantasize about.

" Plato told the story of Atlantis around 360 B.C. There are many theories about where Atlantis was—in the Mediterranean, off the coast of Spain, even under what is now Antarctica. Plato said Atlantis existed about 9,000 years before his own time, and that its story had been passed down by poets, priests, and others. Possibly Based on Real Events? Few, if any, scientists think Atlantis actually existed. Atlantis—Myth or History? Atlantis Myth or history? 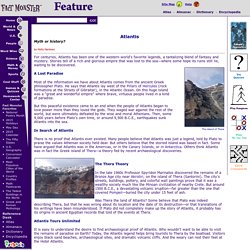 For centuries, Atlantis has been one of the western world's favorite legends, a tantalizing blend of fantasy and mystery. Stories tell of a rich and glorious empire that was lost to the sea—where some hope its ruins still lie, waiting to be discovered. Atlantis "Evidence" Found in Spain and Ireland. Stefan Lovgrenfor National Geographic News August 19, 2004 An empire filled with riches, it was an awe-inspiring civilization west of the Strait of Gibraltar's Pillars of Hercules cliffs—until it was defeated by ancient Athens and consumed by a cataclysmic natural disaster. 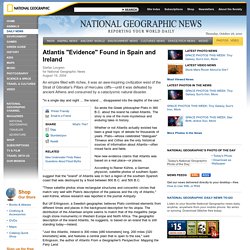 "In a single day and night … the island … disappeared into the depths of the sea. " So wrote the Greek philosopher Plato in 360 B.C. about the island he called Atlantis. The story is one of the more mysterious and enduring tales in history. Whether or not Atlantis actually existed has been a great topic of debate for thousands of years.

Now new evidence claims that Atlantis was based on a real place—or places. Atlantis: No way, No how, No where. Kevin Christopher Volume 11.3, September 2001. 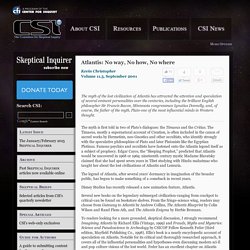 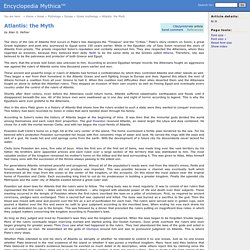 Hefner The story of the Isle of Atlantis first occurs in Plato's two dialogues the "Timaeus" and the "Critias. " Plato's story centers on Solon, a great Greek legislator and poet who journeyed to Egypt some 150 years earlier. While in the Egyptian city of Sais Solon received the story of Atlantis from priests. The priests respected Solon's reputation and cordially welcomed him. The story that the priests told Solon was unknown to him. These ancient and powerful kings or rulers of Atlantis had formed a confederation by which they controlled Atlantis and other islands as well. Shortly after their victory, even before the Athenians could return home, Atlantis suffered catastrophic earthquakes and floods until it disappeared beneath the sea.