How shockwaves from supernova and raging winds from new stars form galactic cavities. Beautiful image was captured by European Southern ObservatoryCloud of gas and dust of N55 nebula is the remnants of star formationLight from young stars strips off hydrogen atoms, causing it to glow pinkThe area is a superbubble' - in which strong stellar winds from new stars and the shockwaves from exploding stars blows away gas and dust By Ryan O'Hare for MailOnline. 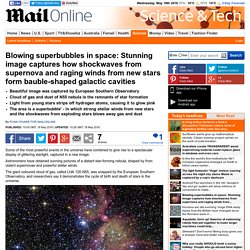 Possibly the most powerful supernova ever seen. An artist’s impression of the record-breakingly powerful, superluminous supernova ASASSN-15lh as it would appear from an exoplanet located about 10,000 light-years away in the host galaxy of the supernova. 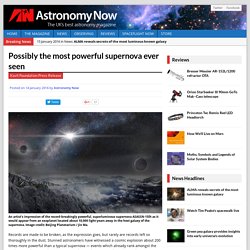 Image credit: Beijing Planetarium / Jin Ma. Records are made to be broken, as the expression goes, but rarely are records left so thoroughly in the dust. Stunned astronomers have witnessed a cosmic explosion about 200 times more powerful than a typical supernova — events which already rank amongst the mightiest outbursts in the universe — and more than twice as luminous as the previous record-holding supernova. At its peak intensity, the explosion — called ASASSN-15lh — shone with 570 billion times the brightness of the Sun. If that statistic does not impress, consider that this luminosity level is approximately 20 times the entire output of the 100 billion stars comprising our Milky Way galaxy. Yet in other ways, besides its brute power, ASASSN-15lh stands apart. How the famous 'pillars of creation' astronomical phenomenon actually disappeared 6,000 years ago. 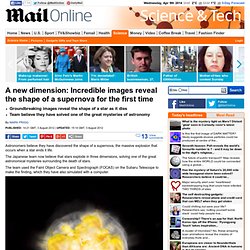 The Japanese team now believe that stars explode in three dimensions, solving one of the great astronomical mysteries surrounding the death of stars. The team used the Faint Object Camera and Spectrograph (FOCAS) on the Subaru Telescope to make the finding, which they have also simulated with a computer. Japanese researchers has simulated a supernova exploding in 3D, giving new insight into how planets begin and end their lives A supernova occurs when stars heavier than eight solar masses end their lives with a brilliant explosion. However, researchers know very little about how the explosions occur. The supernova discovered by an amateur astronomer from a SHED in his Dublin back garden (and amazingly, it's the second one he has found) Discovery is second major find of an exploding star for 41 year old Dave GrennanDedicated to the memory of moonwalker Neil ArmstrongAstronomer admits he 'nearly fell off his chair ' when he made his find By Mark Prigg Published: 10:50 GMT, 29 August 2012 | Updated: 11:01 GMT, 29 August 2012. 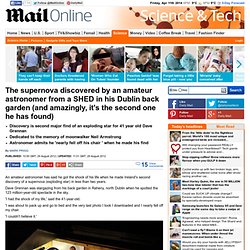 The lonely death of the brightest star: Supernova observed by people in 1006 happened 'in an empty region of space' By Eddie Wrenn Published: 11:39 GMT, 27 September 2012 | Updated: 19:16 GMT, 27 September 2012 It was probably the widest-observed event in human history - but it was also the loneliest of deaths. 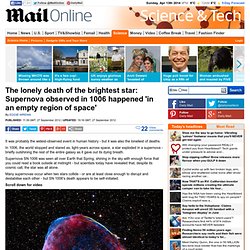 In 1006, the world stopped and stared as, light-years across space, a star exploded in a supernova - briefly outshining the rest of the entire galaxy as it gave out its dying breath. Supernova SN 1006 was seen all over Earth that Spring, shining in the sky with enough force that you could read a book outside at midnight - but scientists today have revealed that, despite its cosmic call, the star was all alone. Many supernovas occur when two stars collide - or are at least close enough to disrupt and destabilise each other - but SN 1006's death appears to be self-initiated. 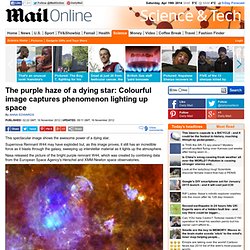 Supernova Remnant W44 may have exploded but, as this image proves, it still has an incredible force as it blasts through the galaxy, sweeping up interstellar material as it lights up the atmosphere. Nasa released the picture of the bright purple remnant W44, which was created by combining data from the European Space Agency's Herschel and XMM-Newton space observatories.

Spectacular supernova remnant W44 is seen in this NASA handout. Nasa said on their website: 'W44 is the vast purple sphere that dominates the left hand side of this image, and measures about 100 light-years across. 'XMM-Newton data reveal that the remnant is filled with X-ray emission from extremely hot gas. 'Herschel's three-colour infrared view comprises PACS 70 and 160 micron and SPIRE 250 micron images. Two massive stars which exploded 12.5bn years ago are 'the oldest supernovae yet found' The cataclysmic death blasts occurred just 1.5bn years after the Big BangNew record beats the previous holder that was 11bn years old By Daily Mail Reporter Published: 18:44 GMT, 31 October 2012 | Updated: 07:53 GMT, 1 November 2012 Astronomers have discovered the oldest supernovae ever detected - two massive stars which exploded 12.5billion years ago. 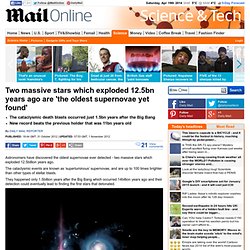 The cataclysmic events are known as ‘superluminous’ supernovae, and are up to 100 times brighter than other types of stellar blasts. They happened only 1.5billion years after the Big Bang which occurred 14billion years ago and their detection could eventually lead to finding the first stars that detonated. One final blaze of glory: Resurrected star's spectacular death throes show how our own Sun may one day look as it finally burns out. Planetary nebula Abell 30 has burst briefly back into life after casting gassy shells out into surrounding space5,500 light years from Earth, it's fate mimics that which probably awaits our own solar system in a few billion years By Damien Gayle Published: 16:53 GMT, 15 November 2012 | Updated: 18:06 GMT, 15 November 2012 This incredible picture shows a dying sun which has burst back to life for a final, doomed blaze of glory. 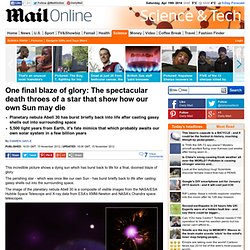 The astonishing 'firework' supernova captured in time-lapse video filmed over a span of 60 years. GK Persei first spotted going supernova in 1901 after it suddenly became one of the sky's brightest objectsAstronomers used images captured over the past 60 years from optical telescopes to recreate its continued expansionThey also used the images to create a 3D model of the explosion to reveal that it is still growing a 620 miles a SECOND By Damien Gayle Published: 11:36 GMT, 25 January 2013 | Updated: 18:33 GMT, 25 January 2013 A powerful celestial explosion first observed over a century ago has been painstakingly reconstructed as a time-lapse video. 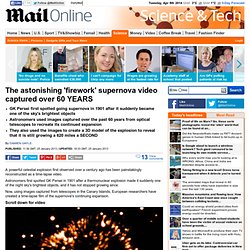 Astronomers first spotted GK Persei in 1901 after a thermonuclear explosion made it suddenly one of the night sky's brightest objects, and it has not stopped growing since. Now, using images captured from telescopes in the Canary Islands, European researchers have created a time-lapse film of the supernova's continuing expansion. Scroll down for video Their findings have just been published in the Astrophysical Journal.