Morrigan. By Honor Johnson This article is about the Goddess Morrigan, whom archaeological evidence now tells us, dates back beyond the Copper age, and was the dominant Goddess of Europe called the Great Goddess. 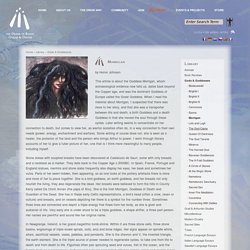 When I read the material about Morrigan, I suspected that there was more to her story, and that she was a transporter between life and death; a birth Goddess and a death Goddess in that she moved the soul through these cycles. Later writing seems to concentrate on her connection to death, but comes to view her, as warrior societies often do, in a way connected to their own needs (power, energy, enchantment and warfare). Some writing of course does not, she is seen as a healer, the protector of the land and the person who brings Arthur to power. I went through literary accounts of her to give a fuller picture of her, one that is I think more meaningful to many people, including myself.

In Newgrange, Ireland, is her grand megalithic tomb-shrine. -from Bruiden Da Choca. -Annals of Leinster. Goddess Morrigan. Areas of Influence: The Goddess Morrigan represented the circle of life, she was associated with both birth and death. 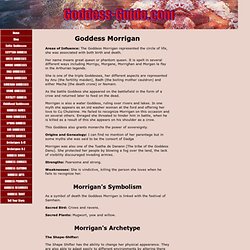 Her name means great queen or phantom queen. It is spelt in several different ways including Morrigu, Morgane, Morrighan and Morgan le Fay in the Arthurian legends. She is one of the triple Goddesses, her different aspects are represented by Anu (the fertility maiden), Badh (the boiling mother cauldron) and either Macha (the death crone) or Nemain. As the battle Goddess she appeared on the battlefield in the form of a crow and returned later to feed on the dead. Morrigan is also a water Goddess, ruling over rivers and lakes. This Goddess also grants monarchs the power of sovereignty. Origins and Genealogy: I can find no mention of her parentage but in some myths she was said to be the consort of Dadga. The GuardHouse: The Morrigan...Celtic Raven Goddess. The Morrigan (also known as the Morrigu) was the shape-shifting Celtic Goddess of War, Fate and Death. 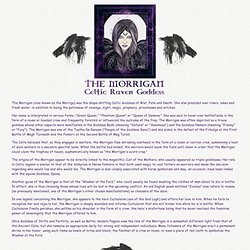 She also presided over rivers, lakes and fresh water, in addition to being the patroness of revenge, night, magic, prophecy, priestesses and witches. Her name is interpreted in various forms... "Great Queen," "Phantom Queen" or "Queen of Demons. " She was said to hover over battlefields in the form of a raven or hooded crow and frequently foretold or influenced the outcome of the fray.

The Morrigan was often depicted as a triune goddess whose other aspects were manifested in the Goddess Badb (meaning "Vulture" or "Venomous") and the Goddess Nemain (meaning "Frenzy" or "Fury"). The Morrigan, Celtic Goddess of War - WHEN THE GODDESS CALLED MY NAME. This Chapter is dedicated to my very dear friend, Morgan. 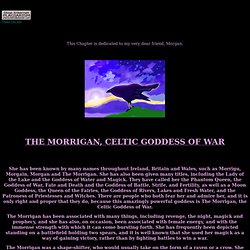 She has been known by many names throughout Ireland, Britain and Wales, such as Morrigu, Morgain, Morgan and The Morrigan. She has also been given many titles, including the Lady of the Lake and the Goddess of Water and Magick. MORRIGAN. Morrigan, with your long red hair flying And your tattered cloak the colour of blood You screech across the battlefield in a raven's croak. 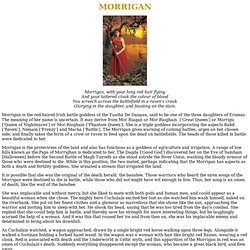 The Morrigan, the Celtic Goddess of Death. The Morrigan's major form is of an old woman, wrapped in a cape of black raven feathers. 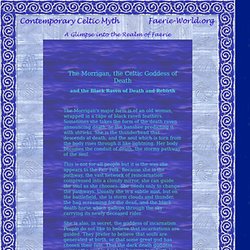 Sometimes she takes the form of the death raven announcing death, or the banshee predicting it with shrieks. She is the thunderhead that descends at death, and the soul which is torn from the body rises through it like lightning. Her body becomes the conduit of death, the stormy pathway of the soul. This is not for all people but it is the way she appears to the Fair Folk. Morrigan. The Morrigan is a goddess of battle, strife, and fertility. 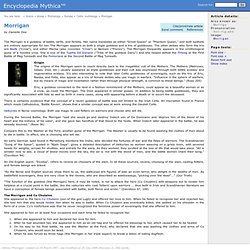 Her name translates as either "Great Queen" or "Phantom Queen," and both epithets are entirely appropriate for her. The Morrigan appears as both a single goddess and a trio of goddesses. The other deities who form the trio are Badb ("Crow"), and either Macha (also connotes "Crow") or Nemain ("Frenzy"). The Morrígan.