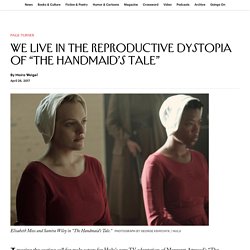 Of the three male characters named in the show’s first episodes, one gets shot almost immediately. The other two stay mostly offscreen. It is not clear how they spend their days. There is a war on, or so they say. There are colonies, where they will send anyone who misbehaves to work to death, or so they threaten. Atwood’s novel, published in 1985, has sold millions of copies and been translated into dozens of languages, so you may know the broad strokes of the story it tells.

Flashbacks hint at how this new order came to be. The Handmaid's Tale by Margaret Atwood. Worksheet downloads » The Handmaid's Tale Study Guide from Crossref-it.info. 10 Great Handsmaid Tale Activities. Dystopian worlds are usually a favorite with high school students. 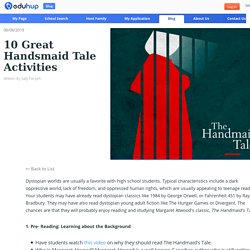 Typical characteristics include a dark oppressive world, lack of freedom, and oppressed human rights, which are usually appealing to teenage readers. Your students may have already read dystopian classics like 1984 by George Orwell, or Fahrenheit 451 by Ray Bradbury. They may have also read dystopian young adult fiction like The Hunger Games or Divergent. 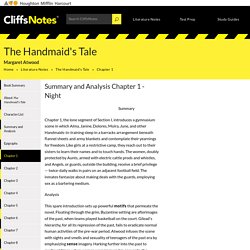 Like girls at a restrictive camp, they reach out to their sisters to learn their names and to touch hands. The women, doubly protected by Aunts, armed with electric cattle prods and whistles, and Angels, or guards, outside the building, receive a brief privilege — twice-daily walks in pairs on an adjacent football field. The inmates fantasize about making deals with the guards, employing sex as a bartering medium. Analysis This spare introduction sets up powerful motifs that permeate the novel. A second significant motif is the juxtaposition of innocence and brutality. Glossary Aunts staff members who blend the prim role of academy schoolmarms with the sadism of prison matrons. Angels a euphemism for soldiers, or guards. Chapter 1. The Handmaid’s Tale: Chapters 1–3, page 2. We do not know yet what purpose Offred serves in the house, although it seems to be sexual—Cora comments that she could have done Offred’s work if she hadn’t gotten her tubes tied, which implies that Offred’s function is reproductive. 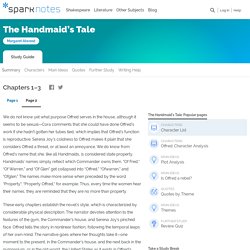 Serena Joy’s coldness to Offred makes it plain that she considers Offred a threat, or at least an annoyance. We do know from Offred’s name that she, like all Handmaids, is considered state property. Handmaids’ names simply reflect which Commander owns them. “Of Fred,” “Of Warren,” and “Of Glen” get collapsed into “Offred,” “Ofwarren,” and “Ofglen.” The names make more sense when preceded by the word “Property”: “Property Offred,” for example. The hidden meanings behind the designs, colors of the 'The Handmaid's Tale' costumes - ABC News. The iconic look of Hulu’s breakout hit “The Handmaid’s Tale” is, in large part, due to award-winning costume designer Ane Crabtree. 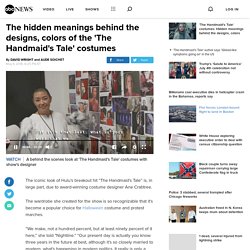 The wardrobe she created for the show is so recognizable that it’s become a popular choice for Halloween costume and protest marches. “We make, not a hundred percent, but at least ninety percent of it here,” she told "Nightline. " The symbolism of clothing and colour in The Handmaid’s Tale – Writing with Charlotte. Reading Time: 5 minutes One of the texts I’m teaching this coming year is Atwood’s The Handmaid’s Tale, as part of the dystopian topic for OCR A-Level literature. 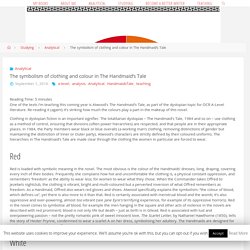 Re-reading it (again!) It’s striking how much the colours play a part in the makeup of this novel. Clothing in dystopian fiction is an important signifier. The totalitarian dystopias – The Handmaid’s Tale, 1984 and so on – use clothing as a method of control, ensuring that divisions (often power hierarchies) are respected, and that people are in their appropriate places. Red Red is loaded with symbolic meaning in the novel. 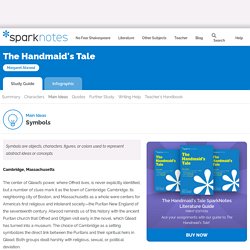 Cambridge, Massachusetts The center of Gilead’s power, where Offred lives, is never explicitly identified, but a number of clues mark it as the town of Cambridge. Cambridge, its neighboring city of Boston, and Massachusetts as a whole were centers for America’s first religious and intolerant society—the Puritan New England of the seventeenth century. Atwood reminds us of this history with the ancient Puritan church that Offred and Ofglen visit early in the novel, which Gilead has turned into a museum. The choice of Cambridge as a setting symbolizes the direct link between the Puritans and their spiritual heirs in Gilead. Harvard University.