Fair Representation Act would be “the most comprehensive approach to changing how we elect Congress… This is the best explanation of gerrymandering you will ever see. Indiana Republican Secretary Of State Found Guilty Of Voter Fraud. Let’s admit it, we all saw this one coming. 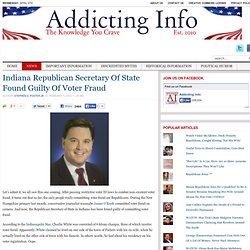 After passing restrictive voter ID laws to combat non-existent voter fraud, it turns out that so far, the only people really committing voter fraud are Republicans. During the New Hampshire primary last month, conservative journalist wannabe James O’Keefe committed voter fraud on camera. And now, the Republican Secretary of State in Indiana has been found guilty of committing voter fraud. According to the Indianapolis Star, Charlie White was convicted of 6 felony charges, three of which involve voter fraud. Hacking Democracy - Full Length. Rigged USA Elections Exposed. BREAKING: Retired NSA Analyst Proves GOP Is Stealing Elections. FairVote.org. About - Free & Equal. The Free & Equal movement will shift power away from the controlling few and back to freedom, liberty, and prosperity for all, in the true spirit of the United States Constitution. 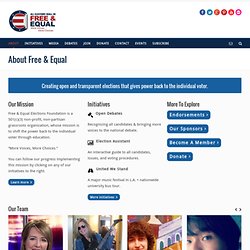 Through positive, peaceful action by activists and third parties, America can fulfill its promise of free and equal elections. New Initiatives to Accomplish Our Goals Our first project is to build an elections database including candidate information on federal, state and local levels. This data will be easily accessible through Free & Equal’s website and will act as a one-stop-shop for candidate information. Our new database will allow voters to find information on a candidate’s history, past voting record and political donations from special interest groups. Full Third Party Presidential Debate In High Definition. The Amazing Morphing Campaign Money Map. Infographic: What's the Cost of Getting Into Congress? (Scaling) 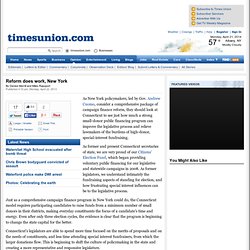 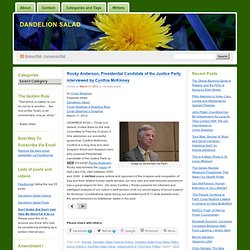 Rocky Anderson, Our President 2012 Official Website. Internet-Based Political Movement Aims To Put Presidential Ticket On Ballots For The 2012 Election. Americans Elect is looking to shake up the politcal process for the 2012 election. 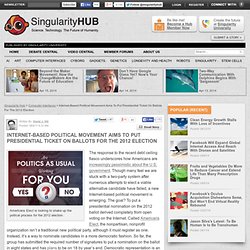 The response to the recent debt ceiling fiasco underscores how Americans are increasingly pessimistic about the U.S. government. Though many feel we are stuck with a two-party system after numerous attempts to elect a viable alternative candidate have failed, a new Internet-based political movement is emerging. Presidents Day - Why Can't We Nominate Our Own President? We Can, We Are. Fix a Flawed System – Use the National Popular Vote. The Uses of Polarization. A primary goal of a presidential campaign is to incrementally increase margins of support among volatile and persuadable demographic groups like single women angered by attempts to restrict access to contraception or voters with long commutes worried about gas prices. 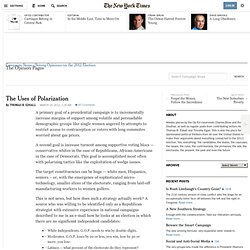 A second goal is increase turnout among supportive voting blocs — conservative whites in the case of Republicans, African-Americans in the case of Democrats. This goal is accomplished most often with polarizing tactics like the exploitation of wedge issues. The target constituencies can be huge — white men, Hispanics, seniors – or, with the emergence of sophisticated micro-technology, smaller slices of the electorate, ranging from laid-off manufacturing workers to women golfers.

This is not news, but how does such a strategy actually work? White Independents. Rig the Vote. That seems to be the plan of Republican lawmakers in several battleground states that stubbornly keep going for Democrats during presidential elections. 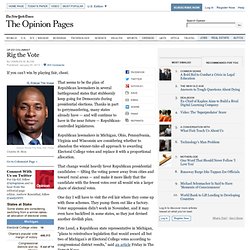 Thanks in part to gerrymandering, many states already have — and will continue to have in the near future — Republican-controlled legislatures. Republican lawmakers in Michigan, Ohio, Pennsylvania, Virginia and Wisconsin are considering whether to abandon the winner-take-all approach to awarding Electoral College votes and replace it with a proportional allocation. That change would heavily favor Republican presidential candidates — tilting the voting power away from cities and toward rural areas — and make it more likely that the candidate with the fewest votes over all would win a larger share of electoral votes. One day I will have to visit the evil lair where they come up with these schemes. Blue Republican - How to Register Republican for Ron Paul (update Oct 21) The Trouble with the Electoral College.

This is the best explanation of gerrymandering you will ever see. Gerrymandering -- drawing political boundaries to give your party a numeric advantage over an opposing party -- is a difficult process to explain. 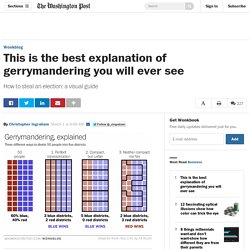 One easy way to end gerrymandering: Stop letting politicians draw their own districts - The Washington Post. I've written a bit lately about the phenomenon of gerrymandered House districts, in the 113th Congress and the decades leading up to it. 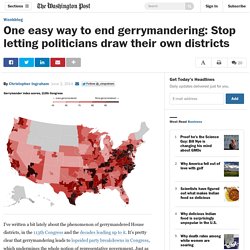 It's pretty clear that gerrymandering leads to lopsided party breakdowns in Congress, which undermines the whole notion of representative government. Just as important, it undermines voters' faith in the democratic process. The burning question, then: can we do better? The simplest and most obvious reform would be to take redistricting out of the hands of politicians completely. Several states have already set up independent commissions to handle their redistricting - California, Arizona, Washington and Idaho.